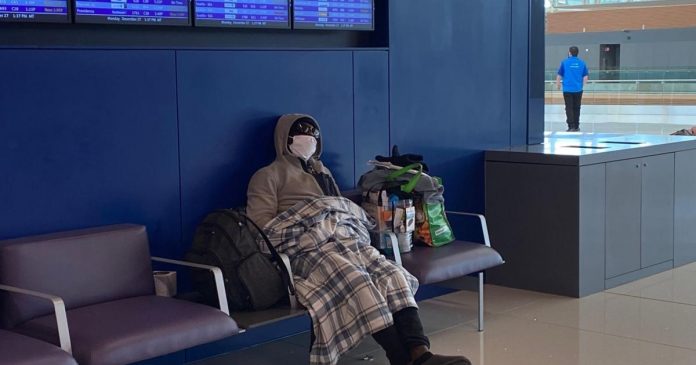 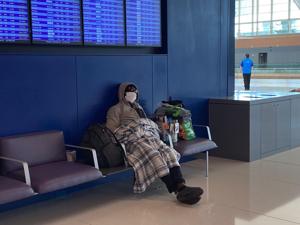 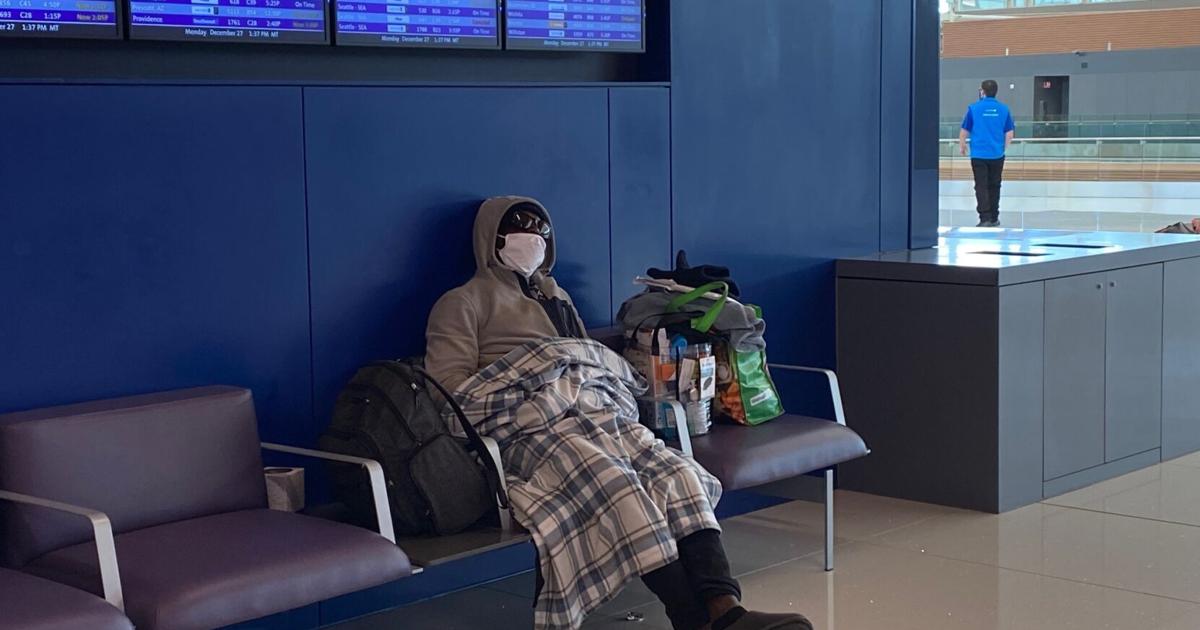 On one of the busiest travel days of the year, the departure and arrival board at Denver International Airport was lit up like a Christmas tree as nearly 500 flights were delayed and close to 100 were canceled Monday for bleary-eyed holiday travelers.

“This is the worst I’ve ever seen it,” said a volunteer greeter at the airport.

Travelers were surrounded by larger-than-normal suitcases and gift bags stretched out in strange positions as they sneaked in naps, many  stranded for various reasons including bad weather and worker shortages due to the coronavirus.

“I’m over COVID!” yelled a double-masked woman who wouldn’t elaborate on her situation as she hustled from the information board toward the West concourse luggage carousel. “Over it!” she yelled.

Flight delays and cancellations tied to staffing shortages have been a constant this year. Airlines encouraged workers to quit in 2020, when air travel collapsed, and carriers have struggled to make up ground this year, when air travel rebounded faster than almost anyone had expected. The arrival of the omicron variant exacerbated the difficulties.

Since Friday, airlines have canceled more than 4,000 flights to, from or inside the U.S., with more than 1,000 U.S. cancellations on Monday, according to FlightAware, which tracks flight cancellations.

“During the pandemic we have seen experienced airline personnel leave the industry and not return across the globe,” said John Grant, senior analyst at travel industry research firm OAG. “Filling those skill gaps was already a challenge in the recovery before the latest variant.”

Delta, United, JetBlue and American have blamed the coronavirus for staffing problems in the past several days. European and Australian airlines also canceled holiday-season flights because of infected staff, but weather and other factors played a role as well.

Luke Carnahan and his infant son, Charlie, were less frustrated after a very long Christmas hangover that started at 6 a.m. Monday in Pittsburgh.

“We got on the plane and sat in place for a while and then they got on the loudspeaker to tell us that an airline attendant was sick. It was stressful because we didn’t have enough food for Charlie,” Carnahan said.

Too frustrated to wait the situation out, the young dad and his wife deboarded the plane and left the airport to grab some formula for Charlie from a nearby store. They returned to the airport just in time for the replacement attendant to fly in from another city.

Jennifer Hernandez and her family — headed to Jackson, Wyo. for a ski holiday — had a choice: Spend the night in the airport or fly to Casper, Wyo., and drive a rental car four and a half hours.

“Let’s hope this makes for a great story time one day,” she laughed.

The Hernandez family said their United flight was canceled because of a snowstorm, and FlightAware showed Tuesday’s flights to Jackson would be flawless — so far.

Almost lost in a pile of huge suitcases, Christmas glitter and blankets was Dolly Guzman, who started her trip just after midnight in Seattle. She landed in Denver to discover her layover flight to Salt Lake City had been canceled due to inclement weather in Utah.

“We are waiting for our room at the hotel,” Guzman said with a shrug. “And Frontier won’t pay for it. There’s nothing we can really do about it.”

She said that as they boarded in Seattle, there was only one person helping people get on the plane. “Sounds like they were having worker shortage problems,” she said.

United Airlines acknowledged COVID-19 is a culprit in the cluster of cancellations, telling The Gazette the airline is working hard to rebook as many people as possible to get them on their way.

“The nationwide spike in omicron cases has had a direct impact on our flight crews and the people who run our operation,” the airline said in a statement. “As a result, we’ve unfortunately had to cancel some flights and are notifying impacted customers in advance of them coming to the airport.”

The Colorado Springs Airport on Monday fared better than Denver International, reporting four flight cancellations and three delays on Christmas, Sunday and through 5:45 a.m. Monday. As of 5 p.m., the airport’s flight status page showed four delays of more than 25 minutes on upcoming arriving flights Monday and four delays of upcoming departing flights for the rest of Monday.

The Gazette’s Wayne Heilman and the Associated Press contributed to this report.