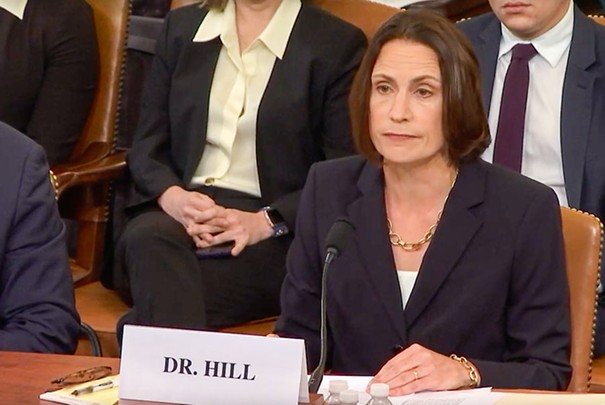 The major takeaway from last week’s Democratic debate was — just guessing here — that most people in the room, most watching from home and probably even most of those on the stage would rather have been talking about Gordon Sondland’s testimony than about the nuances of affordable housing, no matter how important the issue is. (This just in: Apparently all the Dem candidates favor more and better affordable housing.)

The impeachment inquiry, which offers up both real-time drama and a frighteningly close look into the bizarre mind of Devin Nunes, overwhelmed this debate. It’s overwhelming the Democratic primary. For Democrats, this election is about getting rid of Donald Trump. And at this point, the impeachment inquiry offers the slightest of reeds to hold onto. Slight, but something.
If you watched Fiona Hill, formerly Trump’s top Russia adviser in the National Security Council, brilliantly take apart the notion that Ukraine, and not Russia, is the real villain here, you couldn’t help but be riveted. Hell, I’m watching the impeachment hearings with one eye — hey, you try it — even as I write this piece on the debate.

In her opening statement, Hill put it this way, “[S]ome of you on this committee appear to believe that Russia and its security services did not conduct a campaign against our country — and that perhaps, somehow, for some reason, Ukraine did. This is a fictional narrative that has been perpetrated and propagated by the Russian security services themselves… I refuse to be part of an effort to legitimize an alternate narrative that the Ukrainian government is a U.S. adversary, and that Ukraine, not Russia, attacked us in 2016.”

Let’s just say that no one in the debate matched Hill’s stagecraft. If you missed it: tinyurl.com/What-Fiona-Said. I’m sure House Democrats are holding onto the slight hope that Hill’s performance would move her former NSC boss, John Bolton, to show the same guts and testify.

Meanwhile, everyone understands the stakes. In the latest Gallup poll, Democrats said by a 60 to 36 margin that they’d prefer a candidate who can beat Trump to one who agrees with them on most of the issues. And yet to this point, there’s little agreement as to which Democrat is best suited for that particular job. I confess I don’t know. And I’m pretty sure the debate did little to make it any clearer.

You can see from the polling how confused Democrats are. Pete Buttigieg has moved up in Iowa, where he’s leading in some polls, and in New Hampshire — putting him among the polling top tier, along with Joe Biden, Elizabeth Warren and Bernie Sanders — but still well behind in the national polls. Meanwhile, Biden, who stumbled through another debate — David Axelrod said he is “kind of Mr. Magooing” his way — has widened his lead, maybe because of Trump’s attacks. But Biden, notably, is struggling in the early states where voters are paying the most attention.

The reason debates are important is that they’re events, and people tune in to events. And occasionally we can even learn something from them, although rarely when you have 10 on a stage. But it’s never easy to steal the spotlight from Trump. You don’t have to be in the loop to know that. The ability to get constant attention is almost certainly Trump’s greatest asset, if you don’t count sliming anyone who crosses him.

But in this case, it’s the Democrats who have ensured that Trump will be at the center of the news every day impeachment comes up. And it could only get worse. Assuming the House does vote for impeachment, the Senate trial will be held as Iowa and New Hampshire prepare to vote and could go longer than that. And the senators in the race — Warren, Sanders, Harris, Klobuchar, Booker, Bennet — are required to be at their Senate desks during the trial, six days a week. Unless they move those desks to Iowa and leave a 3D copy behind, it’s going to be tough for them to campaign.

So, let’s give them some attention while we can. The headline of the night was that Buttigieg was rarely attacked despite his new frontrunner status. It was probably a good thing for those who held back because Buttigieg was at his best while counter-attacking. He had a great line on experience — asking how much all the Washington experience on the debate stage had helped anything. I’d say he had a decent debate, but not the kind that would cement his frontrunner status.

Cory Booker and Kamala Harris, both trailing badly in the polls, had good nights, both making appeals to African American voters who, according to the polling, are overwhelmingly supporting Biden. Booker’s shot at Biden’s opposition to marijuana legalization — “I thought you might have been high when you said it” — was probably the debate’s most viral moment. Harris had her best night since the first debate. She looked relaxed and her answers seemed less canned. And she played a role in the night’s other viral moment when Biden, touting his support in the African American community, said he had been endorsed by the only black female senator, forgetting that Sen. Harris was standing about 10 feet from him. He meant the first of two black women — Carol Mosley Braun having been the first.

Amy Klobuchar also had a good night. She and Booker have had consistently good debates with little to show for them in the polling, although Klobuchar has moved up in Iowa. Warren, who didn’t get attacked for her latest Medicare for All plan, and Sanders both had an easy night of it. Andrew Yang was refreshingly Andrew Yang. Tulsi Gabbard and Tom Steyer showed why they are not seen as serious candidates. I’m going to guess that this debate will have little impact on the polls.

In other words, it was a debate where the spoken words, to borrow from one of our great debaters, will be little noted nor long remembered. OK, I got caught up on David Holmes’ testimony, and Trump’s real-time attack on his statement.

There are no rules on smearing, I guess, except, in this case, the certainty that the Trump-inspired smears against impeachment witnesses will last at least as long as the impeachment hearings.

This article first appeared in The Colorado Independent