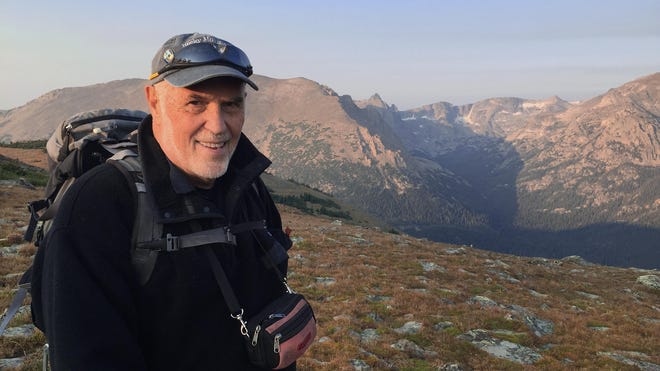 But those footsteps were silenced Monday as the adventurer, artist and former Larimer County commissioner died after a long battle with cancer. He was 82 years old.

Vaughn Baker, former park superintendent, said he felt fortunate to be able to talk to his friend and go through a scrapbook about their experiences hiking the park on Disney’s last day of life.

“Up until the end, I could show him a picture and he could tell you a story about the background of it,” Baker said. “He really loved telling stories, and he was such a friend to the park. I was fortunate to experience the park through his eyes.”

“It’s a place with a lot of raw nature and wilderness, and that’s where we as human beings came from,” Disney, a Loveland resident, told the Coloradoan in a 2015 article. “And there’s where we need to be in touch with still to understand who we really are.”

Disney’s love of the outdoors and the park grew from an early age as he spent his childhood in Glen Haven, at the doorstep of the park. That love led him to summit the park’s iconic 14,259-foot Longs Peak 93 times, all of the park’s 128 named peaks at least once and 1,000 summits in his career, including Denali in Alaska.

Disney’s passion for the outdoors led him to run for a Larimer County commissioner’s seat in 1993, which he won, and to serve two four-year terms. During his time as commissioner he was an advocate for the county’s open lands program and planning with the environment in mind.

More:‘She was always thinking of others’: Coloradoan history columnist Barbara Fleming has died

The accomplished painter’s work focused on mountains and western landscapes over his 50-year career and has been displayed at galleries and museums throughout the country.

He designed an ornament celebrating Rocky Mountain National Park that adorned the White House Christmas tree in 2007, was commissioned by the Rocky Mountain Conservancy to create a poster marking the park’s centennial and twice was the park’s artist in residence.

Roger Wolfe, a Fort Collins resident and retired TV reporter, said in a Facebook post that Disney was a friend who inspired him to produce a documentary on Rocky Mountain National Park and Disney’s connection to the park.

“Jim made everyone around him a better person,” Wolfe wrote. “He was the heart and soul of that video.”