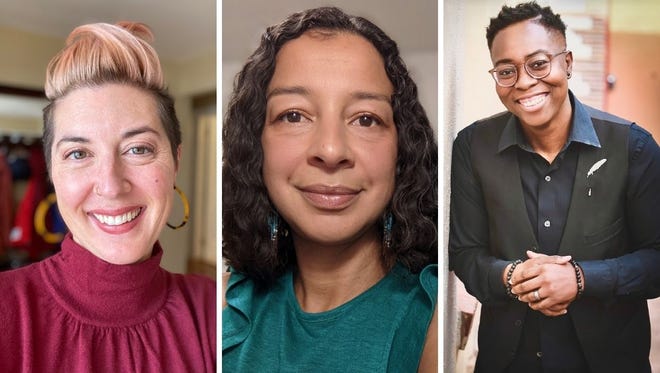 Fort Collins hosted two community forums this week for its chief diversity, equity and inclusion officer finalists. The three finalists — Claudia María Menéndez, Naomi Nishi and Patrice Palmer — addressed their definitions of equity, how they would approach the role and why they are qualified by answering questions posed by the community.

Community members asked the candidates about their experiences with implementing diversity, equity and inclusion (DEI) work, intersectionality and misconceptions of the field.

All three finalists for the position have a long background in diversity and equity work.

Menendez is Poudre School District’s family engagement specialist and was previously a Spanish literacy teacher and cultural mediator in the district. She said her day-to-day work is full of “advocat(ing) for culturally and linguistically diverse families,” and her role has improved her “capacity to really relate to people and understand what it’s like to be different in a place like Fort Collins.”

Nishi works as the associate director of educational outreach at the CU Denver/Anschutz Medical Campus and has done independent DEI consulting for about a decade. Nishi said she’s done DEI and racial justice work across the CU System and was first interested in this position because she had heard Fort Collins was working to center its equity work around race, which was something that resounded with her.

Palmer holds two DEI positions: New Belgium’s diversity, equity and inclusion specialist and a director of social and cultural inclusion at Colorado State University. Palmer, who uses they/them/theirs pronouns, said they’re excited by the idea that through this position, they could ensure that everyone in Fort Collins has a sense of belonging.

In talking about how they would approach the role, all candidates emphasized the importance of intersectionality in equity work, assuring the community it would be part of their approach.

Palmer said “not including intersectionality means not allowing people to show up holistically.” To incorporate this more, the city needs to accept where it is and move forward with educating people on intersectionality, they said.

Menendez said an intersectional lens would allow the city to identify stakeholders.

“People’s identities dictate how they go through the world, and looking at those will help identify where disparities and inequities are,” she said.

Nishi’s said, “If we’re not considering intersectionality in whatever we’re doing … in all likelihood the most marginalized people … fall through the cracks.”

The finalists talked about their histories of diverse coalition building, something Palmer said was “foundational” in DEI work; Menendez called it “the heart of DEI work.”

Nishi said in order to improve coalition building, the city needs to work with the grassroots groups who are doing the work.

“The way I see the coalition (growing) is to make sure that we in the city office are helping to build the bridges between these different groups that are out there in the community doing the work, as well as participating,” she said.

► Are you reading this without a subscription to the Coloradoan? Your support helps us bring you more of the news you care about. Check out our current subscription offers.

Candidates were also asked for their definitions of equity, specifically in the context of local government.

Nishi said equity is ensuring that all “people, individuals and groups, have access and benefits and the ability to participate fully.” She added that historical disenfranchisement and inequity needs to be addressed when aiming for equity and that it cannot be achieved without recognition and acknowledgement of the harm minorities have faced at the hands of others.

Menendez focused her idea of equity on outcomes. She said equity is achieved “when a person’s identities do not predict the outcomes,” and in terms of government work, she said this would take into account race, gender and socioeconomic status. She said using an equity lens in local government would help “take a hard look” at policies to understand what the city needs to move away from and how to better listen to people impacted by the city’s decisions.

Palmer said they think of advancement when thinking of equity.

“We have to think of how we’re advancing folks, who we’re listening to and whose barriers are being removed,” Palmer said, adding that equity is also about recognizing the value different identities bring to the table.

At both forums, candidates addressed common misconceptions people have regarding DEI work. They also spoke about how they would deal with criticisms of the DEI field and their work.

Menendez said the biggest misconception is that DEI work is one person’s job and if someone is not racist, the work doesn’t need to involve them. She said these misconceptions show there’s still great misunderstanding in many communities around what the goal of equity work is and who needs to be involved for it to be achieved.

With regard to criticism, Menendez said it’s important to remember that “inclusivity is not exclusivity.” She believes this office’s message to skeptics of DEI work should be that equity work is done to the benefit of our whole community, not just certain subgroups.

Palmer said the biggest misconception is that people who work in DEI know exactly how to do it and that it’s easy work.

“I am still learning. I am still understanding,” said Palmer, adding that as a Black, queer, nonbinary transgender person, they face challenges both in and out of DEI work. Palmer said oftentimes people confuse their composure with ease, but they clarified that DEI work is not only their profession and what they advocate for, but their lived experience.

Palmer said regarding criticisms of DEI work, the first thing they would do is listen.

“I think if we listen to those critiques, and we begin to understand where they come from, we can rectify those things in a manner that is actually conducive to the narratives that folks have,” Palmer said, adding that they should be transparent that they likely cannot fix every problem but can start the process.

Nishi said one of the biggest misconceptions is that DEI work is the work of people who have been minoritized. She said that while the minoritized groups need to be prioritized, in reality “it’s oftentimes the folks who have dominant identities” who should be leading the work and recognizing harm inflicted on others.

Nishi said she believes that if the work isn’t getting criticism, it isn’t being done correctly. She said people critique not to dismantle something but to improve it, and she is ready to have a conversation and participate in finding solutions with people who do have critiques.

“We should be welcoming that and expecting that at every angle, and that’s how we’ll know we’re doing this work right,” Nishi said.

News in your inbox:Looking for a simple way to get Northern Colorado news? Coloradoan newsletters can help

Honore Depew, the city’s interim policy and project manager who assisted in running the forums, said the city expects to make an offer by mid-July.

Depew said the city conducted more than 20 “internal and external listening sessions” and took feedback from more than 200 stakeholders and participants to help structure the selection process and outline the position.

He added that the position will be part of the city manager’s office and will have staff reporting to them, but the position has not been fully set up so the candidate selected can help build it out.