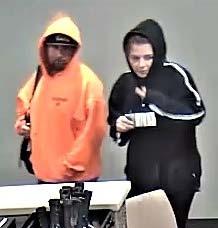 Fort Collins police are looking for suspects believed to be involved in six thefts in the past two months at city recreational facilities.

Police said in a news release that the thefts took place in October and November at the Fort Collins Senior Center, 1200 Raintree Drive, and Edora Pool Ice Center, 1801 Riverside Ave.

In each case, an unknown male suspect entered the men’s locker room and stole personal property, including credit cards that were used at local retailers.

Based on surveillance video footage, detectives determined that at least one male and one female were involved in the incidents. Video shows the suspects are associated with two vehicles: a light-colored minivan and a Ford Super Duty flatbed truck.

See photo gallery for images of vehicles and others associated with suspects:

Police are also looking for information regarding multiple women and a man associated with the suspects.

Anyone with information about these suspects or incidents is asked to contact Fort Collins Police Services investigative aide Kara Walker at 970-416-2275. People who wish to remain anonymous should contact Crime Stoppers of Larimer County at 970-221-6868 or www.stopcriminals.org.

Miles Blumhardt looks for stories that impact your life — be it news, outdoors, sports, you name it he wants to report it. Have a story idea, send it his way. Email him at milesblumhardt@coloradoan.com or find him on Twitter at @MilesBlumhardt.