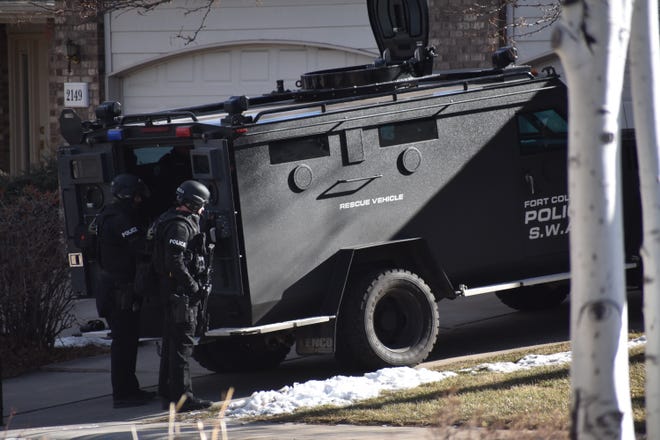 Editor’s note: This story has been made free for everyone to view due to public safety concerns. To support the work of the Coloradoan and to ensure we can keep providing this service in the future, subscribe today.

A man suspected of injuring a woman during a domestic dispute involving a knife in their southwest Fort Collins home on Thursday was safely taken into custody after a standoff with Fort Collins police.

The standoff, which drew a heavy law enforcement presence, started around 10 a.m. when police responded to a domestic disturbance involving a knife at a house in the 2100 block of Bronson Street, according to Fort Collins police.

A 65-year-old female victim, who suffered minor injuries and was transported to an area hospital with minor injuries, was able to leave the home and contact police.

A 74-year-old male suspect remained in the home and refused to exit.

At approximately 12:45 p.m., officers entered the home. He was placed on a gurney and wheeled out of the house to an awaiting ambulance and taken to an area hospital for evaluation.

The two were the only occupants of the house.

During the incident, three schools were placed on secure status, meaning the schools were locked, with activities continuing as usual inside. Those schools were Olander Elementary School, 3401 Auntie Stone St. and Axis International Academy and Colorado Early Colleges Fort Collins West Middle School, both located at 2140 W. Horsetooth Road.

The schools are located three to four blocks from the incident.

Police asked neighbors in the Silver Oaks subdivision to evacuate or shelter in place until the incident ended.

The investigation is ongoing and anyone with information who has not already spoken to police should contact Detective Andy Kinkead at 970-221-6557.