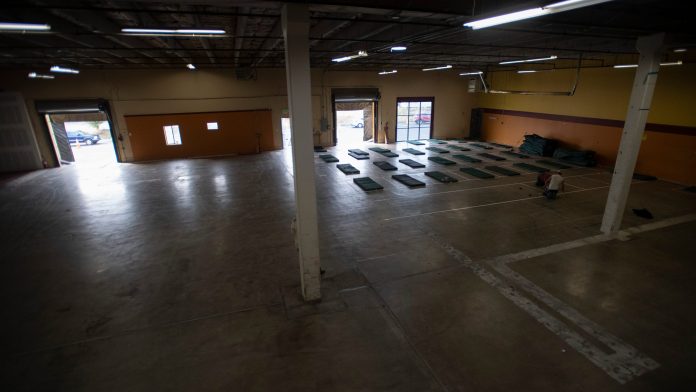 A couple dozen 36-square-foot spaces had already been taped off on the dark gray cement floor of a cavernous warehouse in north Fort Collins on Friday.

By mid-October, the building at 1301 Blue Spruce Drive will be a functioning temporary overnight shelter for up to 150 men experiencing homelessness. The Coloradoan got a sneak peek at the 15,000-square-foot shelter, a partnership between Fort Collins Rescue Mission and the city of Fort Collins.

The warehouse space, leased from Food Bank for Larimer County in north Fort Collins, is just beginning its transformation. Pallets stacked with cartons and wrapped in plastic hold new tables and chairs for the dining area. Most mats are stacked along the western wall as workers tape off sleeping areas and the 4-foot walkways between them — visible reminders of the social distance needed to slow the spread of COVID-19.

“We are excited to experiment and innovate how we can do a large-scale, socially-distant shelter,” said Seth Forwood, Fort Collins Rescue Mission’s senior director.

Lessons learned at the Blue Spruce shelter, coupled with those from this spring’s 24/7 temporary shelter at Northside Aztlan Center, could inform long-range plans to provide more and better services to those experiencing homelessness in the community, Forwood said.

Photos:  See how Northside Aztlan became a temporary shelter for the homeless

Beyond that, the shelter will provide three meals a day and a warm respite from Colorado’s sometimes unforgiving winter.

“I’m excited for a warm space for people to come overnight through the fall and winter,” Forwood said. “I’m eager for a long-term solution that can provide even more dignity for people experiencing homelessness.”

Here’s what we know about how the shelter will operate and what it could mean for future efforts to help those experiencing homelessness in Fort Collins.

The temporary shelter for men is expected to be open from 5:30 p.m. to 7 a.m. from mid-October through April.

People will be allowed into the facility at any time during the night, although check-in will begin at 5.

“We have an obligation to bring people in out of the cold,” Forwood said. “I would prefer everyone be here earlier, but I would rather deal with that than have someone lose their life in the middle of the night.”

When the shelter closes at 7 a.m., people will be required to leave the premises. Security has been hired to ensure men don’t congregate at the overnight shelter and interfere with Food Bank for Larimer County business. The facility gives out food from 11 a.m. to 3 p.m. Mondays, Wednesdays and Fridays. During the Coloradoan’s visit to the location Friday, cars snaked around the building waiting to pick up groceries.

Having people from the shelter milling around the parking lot would “choke off the food bank from being able to do its business,” Forwood said. “We’re fortunate they’re allowing us to use this for overnight shelter.”

The city is paying about $30,000 a month for rent, security, utilities and other expenses associated with the temporary shelter. Federal funds are expected to cover those costs.

Fort Collins Rescue Mission will staff and operate the shelter, including serving dinner, breakfast and a to-go lunch that overnight guests can take with them when they leave each morning.

As Rescue Mission staff switches focus to the new temporary shelter, the organization will no longer provide meals or beds at its Jefferson Street site in Old Town. Instead, staff will use it to prepare meals for the new site.

How staff will handle COVID-19

Fort Collins Rescue Mission is partnering with the Larimer County Department of Health and Environment to identify and isolate people who have symptoms of COVID-19, Forwood said.

Those identified as they come in early in the evening will be sent to an isolation center set up by the health department. Those who arrive late into the night will be isolated on site, possibly in an isolation tent that can be sealed off, he said.

Fort Collins has long dealt with inadequate overnight shelter options for its hundreds of homeless, a need exacerbated by the ongoing COVID-19 pandemic and impending winter weather.

Still unknown is how the housing crisis may worsen depending on how long economic recovery takes and how many more people end up homeless as the pandemic drags on.

When the city closed its emergency shelter at Northside Aztlan Community Center in June to accommodate a children’s day camp, about 100 single men were left with no place to go.

Ordinarily, they could have gone to Fort Collins Rescue Mission, but the pandemic cut the shelter capacity half. The shelter has been turning away people every night, sometimes as many as 20 people, according to previous Coloradoan coverage.

The new site will accommodate up to 150 men while Catholic Charities, 460 Linden Center Drive, will be the go-to shelter for women and families with children, said Joe Domko, regional director of Larimer County at Catholic Charities. Unlike past years, the women’s shelter will not have a sobriety requirement, he said.

To accommodate an expected increase in those seeking temporary shelter, Catholic Charities is expanding its emergency overnight capacity to accommodate 54 women and up to four families, Domko said.

The nonprofit has received permission from county health officials and Poudre Fire Authority to use bunk beds while maintaining social distancing. “The including of bunk beds, in combination repurposing multiple areas of our facility, will allow us to safely hit this mark,” Domko said.

Work at Catholic Charities is expected to be completed in mid-October. Once it’s done, both shelters will open concurrently.

Catholic Charities is erecting a temporary heated structure in its south parking lot for a reception area for women and include seating so “participants may rest and be safe and warm while they wait to enter our building,” he said.

The temporary structure will open at 5 p.m., but meals will not be served until 7, according to Catholic Charities.

Women will be allowed into the main facility in shifts of 20, where they will eat and have access to bunks. In the morning “we will wake women up in increments, allowing them to have breakfast then exit the facility,” Domko said. He anticipates three shifts per meal.

Families with children will be allowed in at 4 p.m. and will not share spaces with women in the emergency shelter.

The city is also working to find a daytime indoor shelter space by October because the daytime shelter at the Murphy Center, 242 Conifer St., is outdoors and the facility has reduced indoor capacity due to COVID-19.

So far, the city has explored “numerous locations” but as of yet, they’ve had no luck, said Beth Sowder, director of the city’s Social Sustainability department.

“Our hope is to find something prior to winter weather hitting as we know that people will seek shelter from the cold and providing a warm place helps keep them safe while also lessening the impacts on businesses and neighborhoods,” Sowder said.

Another temporary program securing hotel rooms for 25 to 50 homeless people who are at elevated risk of deadly COVID-19 infection is funded through October.

What happens when the Blue Spruce space’s lease expires in April is still unknown. The city’s homeless advisory has recommended a new, larger 24-hour shelter be built somewhere in Fort Collins. City Council will discuss the committee’s report at its Oct. 27 study session.

The temporary shelter’s location, while convenient for people accessing the nearby Salud Family Clinic, SummitStone Health Partners and Health District of Northern Larimer County, has also been a source of contention since it was announced Aug. 21.

City staff said they considered more than two dozen locations, three of which were in north Fort Collins, but the Blue Spruce site was the only one that was large enough, suitable for a temporary shelter and available to lease.