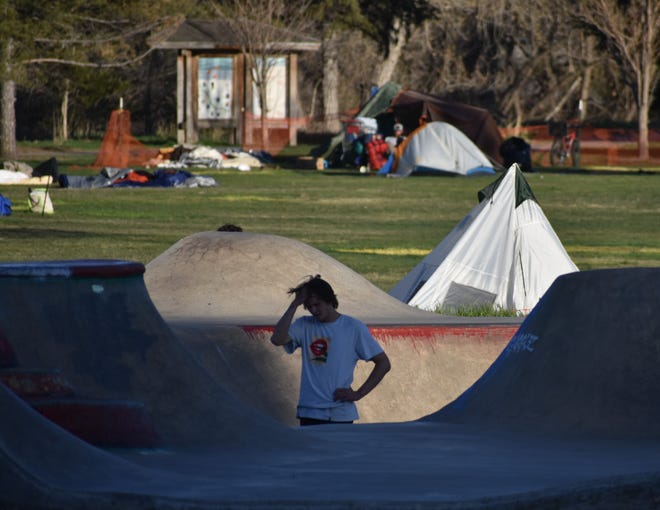 The city of Fort Collins unconstitutionally prosecuted a Fort Collins man for violating the city’s camping ban when he had nowhere else to sleep, an 8th Judicial District Judge ruled this month.

Judge Julie Kunce Field ruled in favor of Adam Wiemold and the ACLU, which represented Wiemold in his appeal of a 2018 camping ticket. Field’s ruling doesn’t strike down Fort Collins’ camping ban, but it raises questions about enforcement in cases when the city’s shelters are full or a person faces circumstances that prevent them from staying at shelters overnight.

ACLU of Colorado Legal Director Mark Silverstein argued that the ruling means the city can’t enforce its camping ban in those scenarios. He listed other potential factors that could make shelters a non-option for people: They have a pet, they’re part of a couple and would be separated by shelter procedures, they’re banned from the shelter, or they have a mental health issue that makes it difficult to sleep in a confined or crowded space.

“Some people just can’t go to the shelters,” Silverstein said. “To punish them for sleeping outdoors when they have no choice violates the Constitution.”

Responding to Coloradoan questions sent to the city of Fort Collins and Fort Collins Police Services, the police department noted that the ruling applies to Wiemold’s specific case and shared a statement from Chief Jeff Swoboda.

“Fort Collins Police Services conducts enforcement in accordance with ordinances and statutes,” he said. “The agency has and will continue to adapt as laws change through legislative and judicial decisions in order to respect the constitutional rights of those we serve. Our focus remains on partnering with our community members to provide safety and service for all, including investing in local programs that support people experiencing homelessness.”

The city hasn’t decided if it will appeal the ruling, FCPS spokesperson Kate Kimble said.

In legal proceedings, the city refuted the notion that Wiemold had no choice but to car-camp in Fort Collins, arguing he could’ve driven outside city limits or stayed at a homeless shelter in Loveland. They also argued Wiemold’s situation was voluntary because he stated he was sleeping in his car to save money as he paid off credit card debt.

“The defendant asks the court to ‘pay no attention to the man behind the curtain’ and shut its eyes to the actual individual facts relating to the defendant’s decision to camp,” read the city’s response to ACLU’s earlier motion to dismiss the camping charge.

A Fort Collins Police Services officer ticketed Wiemold during the early morning of Sept. 11, 2018, after finding him asleep in his car at the Poudre rest area off Interstate 25 and Prospect Road. Wiemold was homeless at the time and working as manager of Catholic Charities homeless shelter in Fort Collins. The shelter rules prohibit employees from staying there or fraternizing with shelter guests. Because of shelter population overlap, he couldn’t stay at Fort Collins Rescue Mission either.

Both shelters were also full that night, according to court records.

Police went to the rest stop that morning to enforce the camping ban after the rest area supervisor texted an officer “complaining about people who are homeless in the area” and repeatedly asking them “to force the individuals who are homeless to leave the rest area,” according to court records. The supervisor said there were ongoing issues with homeless campers in the area causing damage, and the area is designated for two-hour parking.

Field’s ruling directs Fort Collins’ municipal court to dismiss the charge against Wiemold, who is now housed. He said in a statement that the news of the ruling brought him a sense of relief.

“It’s great to know that I won’t have to have this on my record based on what I was going through in my life at that time,” he said in an ACLU news release. “I’m happy that this case could potentially help other people who are experiencing homelessness.”

The District Court ruling represents the first Colorado appellate ruling to adopt the same reasoning as a widely publicized 2018 ruling in the 9th Circuit Court of Appeals. That ruling declared it unconstitutional to prosecute someone for sleeping outside if the person has no choice. The court ruled that enforcing a ban on sleeping outside violates the Eighth Amendment prohibition of cruel and unusual punishment.

Fort Collins city code states that people can’t sleep in public places that are not designated for camping, such as specific recreation areas, or on private properties, except temporarily with permission of the owner. Violating that section of city code is considered a criminal misdemeanor.

The city’s camping ordinance prohibits camping or pitching a tent on public property, although it doesn’t specifically mention vehicles. Camping tickets increased in May following the disbandment of a homeless encampment outside the Northside Aztlan Community Center, which served as a congregate homeless shelter between mid-March and mid-June. The city has been working with Homeward Alliance to provide motel rooms for a smaller number of homeless people who are at high risk of COVID-19 complications since then.

Fort Collins police arrested or cited people for camping on public or private property 262 times between January 2020 and November 2020, according to data provided by FCPS. Arrests and citations peaked between May and August, when police tallied between 35 and 71 arrests or citations per month. Police arrested or cited people for violating the camping ban eight times in November, the most recent month for which data was available. There is one inmate currently in the Larimer County Jail for violating the camping ban, according to a Tuesday afternoon review of the jail inmate tracker.

The Fort Collins Rescue Mission began operating a congregate shelter on Blue Spruce Drive, adjacent to the Food Bank for Larimer County, this fall to fill all or some of the shelter gap left by the closure of the Aztlan Center. The shelter has been experiencing an active COVID-19 outbreak since December, with a cumulative 59 cases among guests and eight cases among staff. The new cases leveled off after the state started assisting the shelter with regular COVID-19 testing, and shelter operators have been following guidance from the Larimer County health department to prevent spread of infection.

It isn’t clear whether concerns about contracting COVID-19 at a shelter would be legally considered a valid reason to camp outdoors or in a vehicle. A similar question is being litigated in Denver, where police sweeps of homeless camps triggered a class-action lawsuit.