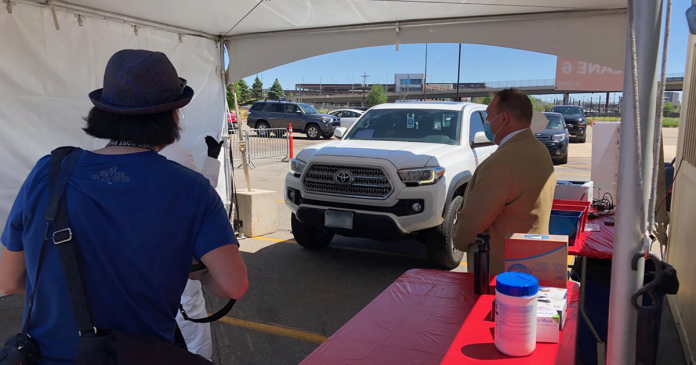 DENVER – The city of Denver will open a new free, drive-up testing site at the Pepsi Center Friday that will test 500 people a day to start with but could test up to 1,000 on a daily basis, Mayor Michael Hancock announced Thursday alongside Gov. Jared Polis.

The tests will be for anyone who believes they have symptoms of COVID-19, and both Hancock and Polis said the tests would be “quick, easy and free.”

The testing site will operate seven days a week, except for on holidays, from 8 a.m. to 4 p.m.

People are being asked to register on Denver’s website for drive-up testing. They will have to check boxes on a series of yes or no questions about whether they are displaying particular symptoms of COVID-19, and if they have displayed one or more of the symptoms over the past week, will be eligible for a free test without a doctor’s note.

After that, the officials said, people can come by the Pepsi Center site, which is in the parking lot on the west side of the facility, at any time between 8 a.m. and 4 p.m. to be tested.

The city is asking people to bring a photo ID of any sort or a document verifying their name to identify people who have been tested more than once, the city said. Minors must be registered by their parents.

But Hancock and Polis were clear that there will be no questions asked about citizenship and that undocumented people should not fear being tested at the site.

People will not need to be Denver residents to get a test at the site – the officials said anyone who fills out the form can be tested, including those from surrounding metro-area counties, though there are testing sites in many of those counties as well.

Unlike testing done early on, which required a trained medical professional to administer the long nasal swab into the back of a person’s nose and throat area, the new testing site will have self-administered tests available that are less intrusive.

People will administer the swab themselves, using what officials described as a Q-tip like swab, which is rubbed in the nose and then handed to a gloved site worker to bottle and send to LabCorp for processing. Hancock said the test results should be available on LabCorp’s website within 3 days. People unable to self-administer the test due to a disability will receive help from staff.

The city says that the tests is the “most accurate FDA approved testing available to date.” The test is not an antibody or serological test and will not tell people if they’ve had the virus in the past, only if they currently have it.

Polis said the process should only take about 15 or 20 minutes. Anyone whose test comes up positive will be contacted by the Denver Department of Public Health and Environment for contact tracing purposes.

If a person cannot get to the Pepsi Center for testing due to transportation or mobility issues, they can call 311 to arrange for a mobile testing truck to come to them or for testing at another facility, Hancock said.

The site is one of 34 community testing sites set up across the state, Polis said, but is the biggest and has the capabilities to handle the most daily tests anywhere in Colorado.

Polis said he spoke with the state epidemiologist Thursday morning and that right now, about 1 in 300 people are infected with COVID-19. He urged people to avoid groups larger than 10 during this Memorial Day weekend to curb spread of the virus through both symptomatic and asymptomatic people.

Colorado State University scientists will soon launch their mass testing of all workers and residents at up to 30 nursing facilities statewide to find more asymptomatic cases at the facilities hardest hit by the novel coronavirus.

New Denver Executive Director of Public Safety Murphy Robinson said about $3.5 million of money the city received from the federal CARES Act was put directly toward building up the site and that it had been stood up in 10 days.

Robinson called the new site “a start” and said it would enable city officials to get more data on how the virus is spreading in Denver and the metro area.

“Opening up the economy safely requires more testing, and without a national strategy to help get this done, states and cities have stepped into the breach to increase our country’s testing capacity,” Hancock said. “With more testing, we can stay on the right side of this epi-curve, get ahead of any future outbreaks and stop them before they have a chance to spread.”