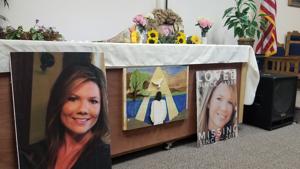 WOODLAND PARK — A year after she disappeared and less than a week after her fiancee was convicted of brutally murdering her, Kelsey Berreth’s friends and neighbors gathered Saturday at the Seventh-day Adventist Church to mourn and remember her.

About two dozen people attended the Celebration of Life at the small church tucked away amidst snow-capped pine trees on Colorado 67 heading north out of Woodland Park.

Berreth, according to her family, moved to the small Teller County town from Washington state about three years ago to be closer to Patrick Frazee, the man who authorities said bludgeoned her to death in her townhome while their 1-year-old daughter was in another room.

Despite the conviction following a weeklong trial, those who spoke during the memorial reflected the community’s anguish over what remains an unexplained killing.

“How many times have you looked up and poured from your broken hearts the question, ‘Why?’ …” said Mike Warren, a Seventh-day Adventist preacher. “It all traces back to the root cause of it all … Sin ignores God’s law and declares ‘Me first. I want what I want and I want it right now. And too bad for anyone who gets in my way.’ Precious Kelsey got in the way.”

Berreth, 29, was last seen nearly a year ago on a neighbor’s surveillance camera that showed her and Frazee entering her Woodland Park townhouse. She carried poinsettias and their infant daughter, Kaylee.

On Saturday, two friends of the couple lamented that perhaps they had missed a sign of trouble between them, and that they hadn’t recognized the danger until it was too late.

Sam Muñoz and Karlee Iles said they met Frazee at a rodeo three years ago. Iles remembered Berreth asking to meet for a Bible study the month before she was killed.

“There are some opportunities you don’t take and then later down the road, you think ‘Why didn’t I take that opportunity?'” Iles said through tears.

“‘Maybe things could have been different,'” Muñoz added. “That’s always going to be in the back of (our) heads.”

“She’s very loved,” Iles said. “Make time for the people you love, and listen to them.”

Saturday’s ceremony was the second event held for Berreth in Woodland Park this week. The night before, nearly 100 people gathered at a candlelight vigil hosted by Woodland Park police.

“Next Thursday’s going to be Thanksgiving,” Police Chief Miles De Young  said Friday. “Her family’s going to have an empty chair sitting at that table. If you have the time and find it in your heart, I know her family would appreciate it — just take a moment, say a little prayer for Kelsey, for Kaylee and for the Berreth family. And be good to each other.”

Monday, a Teller County jury deliberated less than four hours before finding Frazee guilty of Berreth’s murder. Frazee, 33, was sentenced to life without parole plus 156 years.

But Saturday, the focus was not on Frazee. It was on the mother, daughter and sister that the community lost.

“Don’t harbor hatred and bitterness,” Warren told the crowd. “The tragedy is perpetuated until we give all of that to God.”