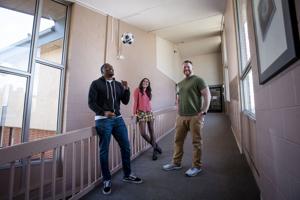 On Tuesday, he and his new friend Ricky, who’s 5, went to Library 21c in Briargate, where they studied giraffes, compiled facts, and drew pictures of the world’s tallest mammal. The pair then headed to a park for some chilly romping.

Nelson also plans to show up at Ricky’s school to help him with his lessons and meet regularly with Ricky’s family.

As a professionally trained mentor with the nonprofit Friends of the Children, Nelson’s job may seem like all fun and little effort.

But the palling around, doing stuff together, and learning as a team serve as a means to an important end.

“I just hope to help Ricky’s family make sure he succeeds and make sure he knows he’s loved,” Nelson said. “I look forward to filling my day with playing with kids all day.”

The Portland, Ore.-headquartered Friends of the Children turns 30 next year and is on a mission to expand its model nationwide.

Organizers selected Colorado Springs in which to launch its first Colorado chapter — No. 23 in the network of 25 chapters and counting — because of the promising environment, said Executive Director Judy Cara.

Seed money of $1.25 million for a portion of startup costs came from contributors that include El Pomar Foundation and Scheels, she said.

Friends of the Children now is forming its first El Paso County cohort of 24 at-risk children, ages 4-6, who will receive free mentorship throughout their elementary and secondary school years to give them a better shot in life.

“What differentiates us from other organizations that rely on volunteers is that we have full-time, trained mentors, who each have eight children they’re responsible for, who get four hours a week of dedicated assistance,” Cara said.

Mentors receive training that covers not only relational development and guidance but also hands-on mechanics of cardiopulmonary resuscitation, sexual-abuse awareness, how to install a booster seat in a vehicle, and other practical tools.

“When the program started in Portland, it was focused on the child, but it became apparent that children couldn’t be successful if the parents were homeless or there was food insecurity in the family,” Cara said.

Some children accepted into the program are in the foster care system and being referred by the El Paso County Department of Human Services. Other children attend school districts the organization is working with, including Widefield D-3.

Some children will move into Friends of the Children after graduating from CPCD, the local Head Start administrator that has programs for infants through age 5.

Both programs focus on helping two generations: the children and adults in a biological or foster family, said Noreen Landis-Tyson, president and CEO of CPCD.

With economic and geopolitical instability, many Colorado nonprofits struggling with finances, staffing, which is impacting services

“Friends of the Children builds on the learning and family stability achieved in pre-kindergarten and ensures continued success by coming alongside both the child and the child’s family,” she said. “It’s a proven model that leads to high school graduation and is especially effective for children in foster care.”

He grew up in a Portland neighborhood that had “a lot of gangs and violence.”

“It could have been the possibility that I went down the same road,” he said. “Some of my friends did.”

Instead, a Friends of the Children mentor walked alongside him through middle school and high school. And now he can relate to what his mentees are facing.

“It’s not like you can’t do this or that; it’s figuring out what they have going on in their life and steering them along the right path,” Bryant said.

The approach of Friends of the Children has caught the attention of celebrities, including new Denver Broncos quarterback Russell Wilson, and his Grammy award-winning wife, Ciara.

While guest hosting the March 4 episode of “The Ellen DeGeneres Show,” Ciara touted the work of Friends of the Children.

In Colorado Springs, Cara is fundraising to create a clubhouse for children in the program to hang out with their mentors, as well as securing a larger office.

She plans to have 24 children selected by the end of this school year and annually add 24 more children and three additional mentors for the first three years.