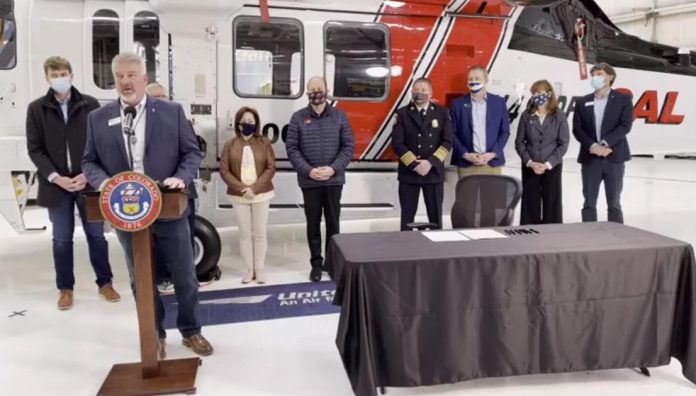 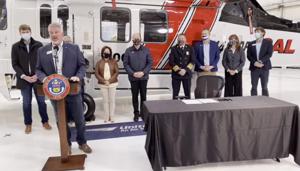 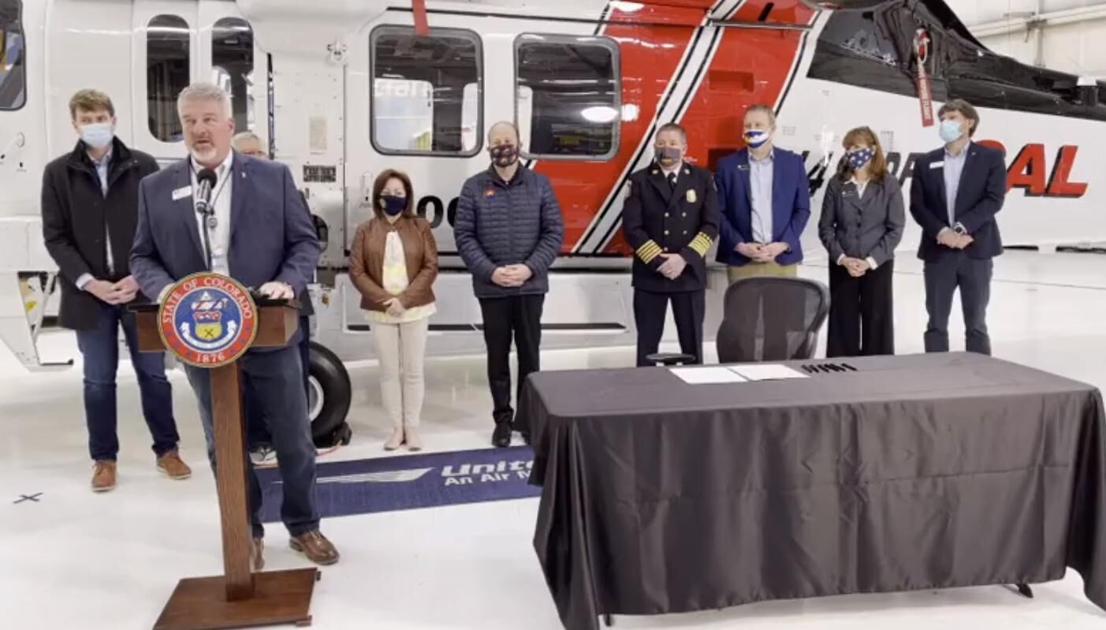 Gov. Jared Polis on Sunday traveled out to Centennial Airport to sign into law a bill that will allow the state to purchase a $24 million helicopter specially equipped to fight some of the state’s biggest wildfires.

The Firehawk’s ability to go into rugged and high-altitude terrain makes it attractive for fighting wildfires in Colorado, according to Mike Morgan, director of the fire prevention division at the Colorado Department of Public Safety. It could be a “game changer” for firefighting in Colorado, he said.

“Colorado has some of the most extreme terrain,” he recently told Colorado Politics. “There isn’t another helicopter that performs with the same capabilities.”

Those capabilities include a closed container for water, with a capacity of 800 to 1,000 gallons. A closed-container helicopter can travel over roads, for example, something a chopper with a bucket cannot, without permission.

And the Firehawk has uses that go beyond firefighting, including helping the Colorado Department of Transportation with avalanche or rockslide control. It could help the Department of Natural Resources with wildlife counts, or the Department of Agriculture, which moves hay to livestock stranded on the Eastern Plains during blizzards. It could help local law enforcement and with search and rescue operations.

Polis signed Senate Bill 113 into law, surrounded by some of the bill’s sponsors, including Sen. Bob Rankin, R-Carbondale, and Rep. Julie McCluskie, D-Dillon, along with Dan Gibbs, executive director of the Department of Natural Resources. A Firehawk owned by California, which has purchased a dozen in the past year alone, was in the background.

While the helicopter has an estimated cost of $24 million, it will take about eight months for United Rotorcraft to retrofit it, according to Doug Flanders, AirMethods vice president of corporate communications. The additional $6.8 million in the law will pay for staffing the chopper as well as leasing an additional helicopter in 2021 in preparation for the wildfire season.

Under the law, $6 million goes to the Forest Restoration and Wildfire Risk Mitigation Grant Program Cash Fund, for grants to reduce hazardous fuels, such as dead trees, to reduce the potential risk for wildlife damage to property, infrastructure or water supplies.

The wildfire preparedness fund got $3 million, to be matched with federal dollars, to assist local governments with strategic planning to prevent wildfires.

An additional $4 million would go to the Colorado Water Conservation Board within DNR to work on damage to watersheds from the 2020 wildfires. Sen. Bob Rankin, R-Carbondale, said during a committee hearing last month that federal funds to help pay for other watershed restoration projects are also in the works.

But those dollars are a far cry from what the state needs for mitigation and response, estimated at $750 million just for the most urgent areas in the wildland-urban interface.

A third bill, also signed by Polis Sunday, adds dollars to the Department of Public Safety for additional firefighting resources. Senate Bill 49 puts $1.5 million toward the Colorado Firefighting Air Corps Fund and $7.3 million for aviation resources within the division of fire safety and prevention.