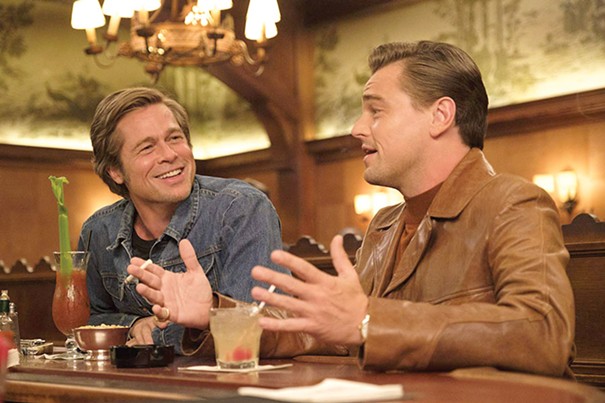 We finally reached the end of the 2010s, and what a long, strange trip it was. When the period started, there were only two Marvel Cinematic Universe movies. Ten years later, the MCU boasts 23 feature films, with seemingly no end in sight. Meanwhile, Martin Scorsese bid farewell to the last decade by making a movie that played on IMAX screens, and now his films debut on iPhone screens.

It often feels like the cinema wars are over, the corporate brand loyalists won, and media conglomerates are salting the earth to ensure that artistic ambition will never again threaten the corporate hegemony. However, no matter the obstacles put in their way, great filmmakers continued to make great films, right to the end of the decade.

For his part, film critic Daniel Barnes found 10 good reasons to celebrate the state of film in 2019. He also compiled his picks for the 10 best films of the decade.

Directors Benny and Josh Safdie double down on the pure rush of their 2017 success Good Time with this adrenaline-soaked thriller. Adam Sandler gives the performance of the year as Howard Ratner, a New York City jeweler and danger addict barreling through the halls of power in search of the ultimate win. The relentlessness of the protagonist is matched only by the relentlessness of the filmmaking.

2. Once Upon a Time in Hollywood

It’s so easy to luxuriate in the sights and sounds of Quentin Tarantino’s historical fantasy that you could overlook the richness of the text. Once Upon a Time in Hollywood is Tarantino’s career-encapsulating look at how violence shapes our lives, both onscreen and off. As soon-to-be has-beens navigating the shifting tides of 1969 Hollywood, Leonardo DiCaprio and Brad Pitt deliver the most emotionally vulnerable performances of their careers.

Mike Leigh’s epic story of the 1819 Peterloo Massacre played to largely indifferent festival circuit audiences in 2018, and it only received a cursory theatrical release before getting dumped onto Amazon Prime. Honestly, I wasn’t all that pumped to watch two-plus hours of workers’ rights speeches followed by a bloody massacre either, but I found Peterloo riveting from start to finish.

This sun-drenched horror film from Hereditary director Ari Aster haunted me like nothing else released in 2019. Florence Pugh gives a gut-wrenching turn as a grieving student who follows her turd of a boyfriend to a festival in Sweden, only to find terrors beyond comprehension. Pugh will probably get an Oscar nod for her charming supporting turn in Little Women, but this is the performance I’ll remember.

Peter Strickland’s marvelously overwrought dark comedy gripped me from the first shot of a knife slicing open a box of clothes. Marianne-Jean Baptiste stars as a lonely single mother drawn into “a prism of retail abstraction” by an evil red dress. Strickland packs more wildly ravishing moments into the first 15 minutes of In Fabric than most filmmakers could muster in their entire careers.

Noah Baumbach ends a decade that included Greenberg, Frances Ha and Mistress America with this painful but hilarious look at an artistic couple going through a messy divorce. Adam Driver and Scarlett Johansson are both marvelous in the lead roles, while Laura Dern, Ray Liotta, Alan Alda and Julie Hagerty contribute strong support.

Less heralded than the other Scorsese movie released on Netflix this year, but more of a pure joy to watch. Scorsese builds this “pseudo-documentary” from pieces of Dylan’s 1978 film Renaldo and Clara, then sprinkles in some fake-out talking head interviews. Come for the metacommentary, stay for the face-melting concert footage from Dylan’s Rolling Thunder Revue tour.

For his 21st feature film, the great Spanish director Pedro Almódovar reaches back into his inkwell of semi-autobiography to create the quietly enchanting Pain & Glory. Frequent Almódovar muse Antonio Banderas sets aside his usual scenery-chewing to play an ailing, Almódovar-esque filmmaker confronting his past. After a couple of relatively forgettable efforts, Pain & Glory feels like the work of a new man.

The end of the decade seemed to put many great directors in a reflective mood, and no one ruminates through his art like Scorsese. Instead of the flash-bang Casino clone that many people expected, Scorsese gave us a bleak, somber story about the inexorable rot created by corruption and violence. The CGI-scrubbed Robert De Niro felt distracting at times, but Joe Pesci and Al Pacino are amazing.

As in Snowpiercer, director Bong Joon-ho turns an obvious class war parable into a compelling genre film. It’s the perfect mix of his penchants for tidy symbolism and unhinged tonal shifts, with a strong ensemble cast led by longtime Bong favorite Song Kang-ho.

Like Tarantino in Once Upon a Time in Hollywood, M. Night Shyamalan reexamines his past with Glass. Instead of the culmination to a grand career, though, Shyamalan reaches the rock bottom of hacky gimmicks and clueless storytelling.

Just as swollen and painfully unnecessary as the four other Disney live-action remakes of animated films released in 2019. So why single out Aladdin for scorn? Because you can never unsee a dance sequence directed by Guy Ritchie.

Kenneth Branagh caps a career built on flavorless yet vainglorious Shakespeare adaptations with this borderline unwatchable turn as the Bard of Avon. Branagh directs the film with his usual lack of personality or control.

Former Limp Bizkit frontman Fred Durst directs this insipid revenge fantasy for talentless elitists. Star John Travolta hits an embarrassing new low, and yet his shameless overacting is the only reason to watch this traffic accident.

Given full access to the Beatles’ songbook and an irresistible story idea, director Danny Boyle and screenwriter Richard Curtis manage to make a film that misunderstands the appeal of the band more thoroughly than the 1978 disaster Sgt. Pepper’s Lonely Hearts Club Band.

Top 10 Films of the Decade

1. Under the Skin
2. Upstream Color
3. A Pigeon Sat on a Branch Reflecting on Existence
4. Margaret
5. Martha Marcy May Marlene
6. Inherent Vice
7. Inside Llewyn Davis
8. Uncut Gems
9. The Master
10. The Florida Project