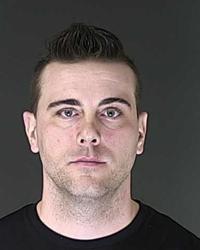 Police are searching for four suspects who stole merchandise from a business in the 6500 block of S. Academy Boulevard, where a Circle K convenience store, Shell gas station, liquor store and Safeway make up a shopping plaza.

About 12:30 a.m., a clerk at the business confronted the suspects who were taking merchandise, police said. One of them told the clerk to “back off” and reached into his pocket. Police said the clerk believed they had a weapon.

The suspects left the business before officers arrived.