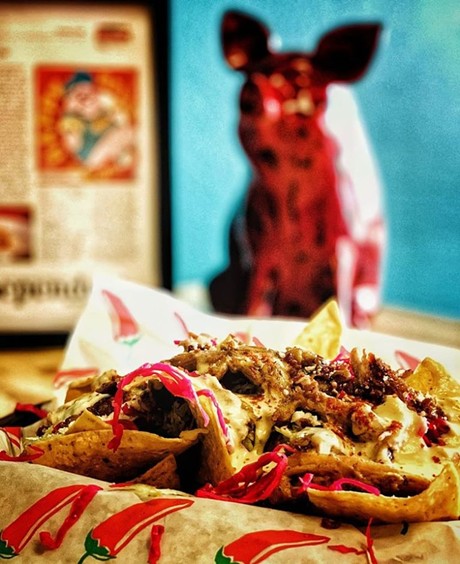 The Indy reported in October on Happy Belly’s new menu to mark its first anniversary downtown.

Mark Henry, president of Elevated Carnivore Group (Rooster’s House of Ramen and Happy Belly Tacos) brings his Mexican cuisine to the rapidly growing Eastside of Colorado Springs and teams up once again with Sean and Inez Fitzgerald, owners of The Wobbly Olive and Allusion Speakeasy (the revolving pop-up bar inside of Rooster’s) to expand the concept and debut his third brick and mortar — set to officially open Thursday, December 12.

“I need to focus on my strengths and I’m a bartender at heart,” says Sean Fitzgerald. “So this partnership made a ton of sense because I can manage the front of the house, what I’m good at, and Mark, as the chef, can handle the back of the house. This way we can divide and conquer.”

The united front also benefits the original Happy Belly (125 N. Spruce Street) and finally puts the constant questions and outcries from patrons, who desperately (and rightfully so) desire margaritas and beers with their tacos, to rest. Fitzgerald confirms that “as soon as we get the change over completed in a successful way we will apply for a liquor license for the Westside.”

Beyond the appreciation for solid food and bev pairings, the lateral movement across town offers Eastsiders more variety of the local kind with an additional homegrown establishment amidst the layers of franchise restaurants in the general vicinity.

“It’s not necessarily better but I think it’s different,” says Henry. “Opposed to having an alley of chains we are representing the clientele, the community and bringing people the food they’ve asked for.”

Give us what we want. The ultimate hand-held comfort foods.
The menus at both Happy Belly’s will read similar, with some additions at part two, but the transition appears to be seamless as, according to Fitzgerald, tacos already rank as the best selling food items at The Collective.

“This shows a need and we can play in the same sandbox with them,” seconds Henry. “They want somewhere they can sit down and have great margaritas and fast, good tacos. A place to call home.”

Fitzgerald and Henry both want Happy Belly to be a culture that reaches across Colorado Springs, an open forum whereas it’s very involved and committed staff can share suggestions and grow together to create heightened dishes and provide better service. During our recent podcast with Henry — “Livin’ that Chef Life” — he speaks directly to the importance of overall company morale and the dire need for constructive commentary saying, “I work on inspiring my staff, not motivating them… inspiration lasts longer.”

“Mark is really cultivating this idea that he doesn’t care where the idea came from,” says Fitzgerald. “He wants to listen to [his staff] and let them try things that are fun while staying in the mantra of what Happy Belly is.”