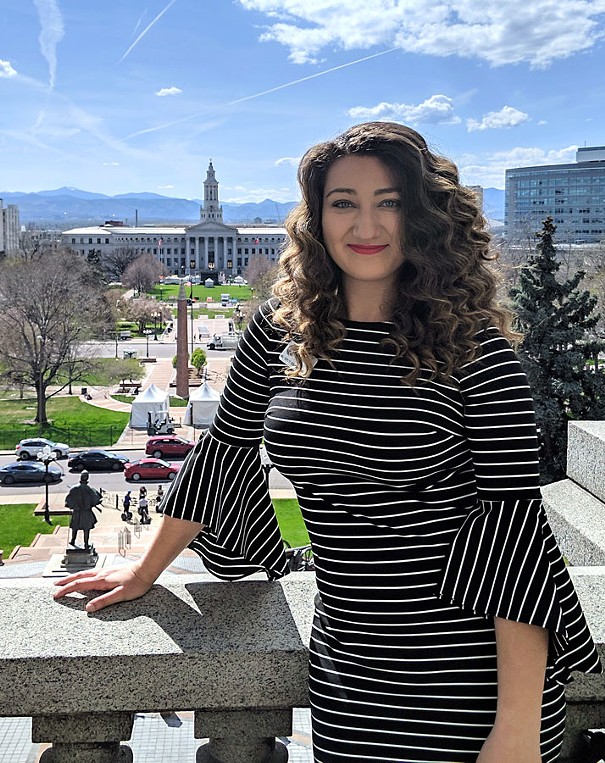 Vanessa Harmoush was bitten by the journalism bug early on, and it gave her a taste for making a difference. The Colorado native worked on school newspapers in middle and high school, attended the University of Colorado at Boulder where she earned a degree in journalism, and started her professional career as a journalist at the Washington, D.C., bureau for Al Jazeera America, where she specialized in feature content.

“I liked seeing how news stories could be thought-provoking, could get people to think about their views, think about why they’re thinking that way and cause conversation and discussion,” she said. “But I also like the idea that my story could inform people and keep them safe and protect them.”

For Harmoush, Al Jazeera America’s Qatar-based sister news organization, Al Jazeera, was always on when she was growing up in Lebanon. After her time at the D.C. bureau, she took an internship with then-Sen. Mark Udall.

“I got to see how a member [of Congress] who’s in a position of leadership can really make a lot of change for his constituents … and how much power they have to really create this change,” she said. “So I really wanted to be part of it.”

Today, she works as the communications director at Rocky Mountain Values, a progressive advocacy organization.

Harmoush: Rocky Mountain Values is an issue advocacy organization. Our main focus is lifting up the voices of Coloradans as a way to really hold our elected officials accountable. We’re working on a lot of federal legislation, but our two main issues are health care and climate.

More recently, because of everything … health care has been our primary focus. For example, we have a project lately where we are having doctors, nurses, small business owners and workers share these videos where they’re talking about the help they need. If [they’re] a doctor or a nurse, [it might be] access to [personal protective equipment], [or maybe] it’s [getting people to understand] that this is really dire and they need our elected officials to be leaders in terms of saying that this is serious and people should stay home.

We have small business owners or workers, some of whom have had to be let go, asking for help. They need access to paid sick leave or the like. [They may be] applauding the stimulus plan and the [$1,200 stimulus] check, but they’ll say that we need more and one time is not enough. So instead of having [elected officials] hearing it from me, because I’m not really that important of a voice, we’re raising up a lot of the voices of Coloradans.

Something else we have been also doing is highlighting the fact that there’s a special enrollment period [for health insurance] here in Colorado. We’re really lucky that Colorado has its own exchange, and we’re really lucky that we have leaders here who decided to open it up, and not only open it up once, but extend it till the end of April. So we’ve been promoting a lot of what’s happening with that.

[We recently did] a town hall with a lot of Latinx leaders to also promote the open enrollment in the Latinx community, especially since they have the highest uninsured rate and [one of the most infected populations per capita by COVID-19].

Explain why you’re talking about the Latinx community specifically.

So 22 percent of the population in Colorado is Hispanic, but 28 percent of people affected are Hispanic. It’s affecting that community a lot more. And we’re seeing the same thing with the African American community. It’s just hurting people of color more. So we’re trying to raise awareness and make sure that they have resources to keep themselves safe and their families safe. We’re also trying to call attention to that so our leaders see this and are doing something about it.

Why is it important to keep pushing progressive causes during this pandemic? Our needs don’t really change. People are still dealing with this stuff every day. If anything, they’re dealing with it more. For example, now we’re really seeing why access to affordable health care is important. We’re seeing why access to paid sick leave is necessary. We’re seeing why bailing out our small businesses is really essential. All of this stuff is coming to a head now, and people are seeing why we need to do it. So while we’re all at home, it’s important to keep talking about it, and to keep raising awareness, and to keep talking to our elected officials. They’re still working. They’re keeping themselves safe, which is great, but they still have the power to move this stuff further, to get legislation ready, to really push things at the federal level or even at the state level, depending on what you’re trying to focus on.
They’ve got the power to make real change, so it’s important to remind them of that responsibility. Is that about right?

Yeah, exactly. While the state Legislature is suspended for a bit, there are still things happening at the federal level. We still have congressional members that are close to a lot of the leadership in what they’ve been doing. For example, Sen. [Cory] Gardner is really close with [Senate majority leader] Mitch McConnell. He’s really close with the president. There’s a lot he can do. We need to keep telling him to do this stuff. There are real people that are hurting, and he needs to step up and actually take care of them, help them and do what they’re asking them to do.

What are your professional goals?

Last year we had a really historical legislative session, a lot of really big bills were passed. Speaker KC Becker [was] an amazing leader, and working for a female leader was just so much more inspiring for me. I want to eventually work for a female elected [official] that I believe in, who’s in it to really protect people and help make change. I love seeing women who are really passionate go forward in this industry, especially since it’s been historically a man’s game. As someone who grew up in Lebanon, not here, to see a lot of women of color taking the lead and taking the charge has been really inspirational. That’s kind of where I’m hoping to go.

In terms of this organization, I want to keep raising up the voices of people that are being impacted. I am pretty lucky in that I still have a job, I can work from home and I don’t really have a lot of reasons I need to leave the house — but knowing that not everyone is in that situation, I want to keep raising those voices with the hopes that our elected officials see that and take some drastic steps to protect them.

Your background living outside of the U.S. and experience in cultures outside the U.S. — do you think that gives you any kind of professional leg up? I don’t think it gives me a professional leg up, but I think it drives a lot of my passion. You know, one of the biggest things is in Lebanon, it’s a pretty corrupt government. You can speak out about it, but nothing is really coming out of it. Granted, that’s been changing the last year, but historically, and when I was growing up there, you just kind of accepted that that’s how it is. Coming here, seeing that we have this freedom to speak out, to do something, to really impact change, is really what’s been pushing me to keep going. I love that we have this freedom. But growing up Lebanon also taught me to be really understanding of people’s circumstances, and that’s guided the way that I work — being really understanding, being able to listen to people and trying to relate to them.

Something that we’ve been hearing and you’ve kind of touched upon is [whether it’s] OK to still be political or speak out during this time. I would say it’s actually more important now, to do it. We’re struggling, but we’re community, and that’s great. But if [a national crisis] happens again, we need to make sure that there are resources in place to protect everyone. So I think that, especially for young people, it’s OK to speak out. Please do. Call your elected officials, and tell them what’s going on — and just keep doing the work.