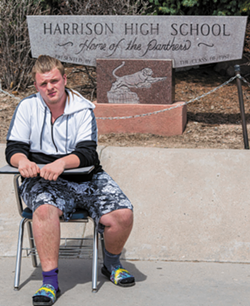 He had played his last football game, and he wanted to finish his track career on a high note. He’s a passionate singer and performer, and was looking forward to his final choir and theater performances.

Even some high school rites of passage that weren’t up his usual alley, like going to senior prom, Morris planned to attend. He figured if nothing else, he and his girlfriend could check it out for a bit, get some decent photos taken together and head out early to catch a movie.

But those aspirations were flipped upside down with the arrival of the COVID-19 pandemic. Morris’ first warning of its potential disruptions to his final year came from his theatre teacher just before spring break.“My teacher said, ‘Hey, just in case spring break [is extended] for another week, make sure you’re practicing your lines,’” he recalled.

But he had no idea that extension would end up lasting the rest of the semester.

“It was just upsetting,” Morris said. “I feel like I worked so hard to get to senior year just to see it all get thrown away.”

With schools officially closed to in-class learning, some of Morris’ remaining to-dos — like donning a cap and gown and walking across the stage at the Broadmoor World Arena to receive his diploma — had to be postponed. Other aspirations are still up in the air, but most have been canceled entirely.

Morris and his fellow Harrison Panthers are just a small segment of Colorado students for whom the promises of a traditional senior year cannot be fulfilled in 2020. Because of COVID-19, they won’t be able to bond on senior trips, cut a rug at their final school dance, cheer at their last rivalry games or make lasting memories on senior skip day.

And with all spring activities canceled throughout the state, that’s not all some athletes and performers will miss out on. “I feel bad for some seniors who were depending on this year to try and get a full-ride (scholarship),” Morris said. “How are they supposed to get any college looks now? So it bothers me to see this happen to so many athletes who have worked so hard for four years to get to where they’re at. It just sucks.”

The last days of senior year are much more than just yearbook signings and powderpuff football games: They represent the final leg of a long and challenging journey, as well as an opportunity to celebrate that accomplishment and the hard work it took to get there.

Many seniors face adversity on their path to graduation, but for Morris, that journey was particularly hard.

During his junior year, Morris’ grades slipped mightily. He didn’t have any plans at the time of attending college, and figured he’d join the working world after he finally finished high school.

He had much more than his grades on his mind.

His mother, who had epilepsy, chronic obstructive pulmonary disease and cancer, died his sophomore year in 2017 after a lengthy fight with the three conditions.

“I didn’t think I was going to go to college at all,” Morris said. “I was dealing with a lot of mental stuff with my mom, and even though it was a year after she passed away I just couldn’t bear it. I just couldn’t get in the right mental state.”Morris failed a couple of classes, but made them up in summer school, passing one with a 113 percent and receiving a B in the other.

Heading into his senior year, Morris wanted to make sure he had high-enough grades to be eligible for football and track; later, when he found out about the Dakota Promise Scholarship — a partnership between Harrison School District 2, Pikes Peak Community College, the Dakota Foundation and the Legacy Institute that provides full, two-year scholarships to qualifying Harrison seniors — he felt reinvigorated.

He knew his grades were on the border of the minimum requirement for the scholarship, so to better his chances, he set a goal to earn all As and Bs his senior year. He has since brought his GPA up above a B average. His lowest grade is currently a C-plus in one of his advanced placement classes.

And his goal of securing the Dakota Promise Scholarship has also been met. Morris is set to attend the school next fall, and wants to major in business with a minor in musical theatre.

His mom, who was a nurse prior to her epilepsy diagnosis, was the first member of his family to graduate college. Morris is determined to follow in her footsteps and become the first male in his family to earn a college degree.

Everything on his journey of scholastic redemption was going according to plan. But then the pandemic made its way to Colorado.

Morris is still on track to graduate with his fellow Panthers, and his school is organizing a virtual ceremony in May, as well as a traditional commencement celebration in late July. But while the pandemic doesn’t diminish the scholastic marathon these seniors have run, it’s essentially taken away their opportunity for a victory lap.

“We just worked so hard all four years, and saw some friends that didn’t even make it past their freshman year,” Morris said, “just to have this virus take it all away.

“Some seniors hate going to school, but most of us … love it. We love being with our teachers and doing all the extracurricular stuff, eating lunch with our friends and little stuff like that.”

Putting in the work

While sports and events and extracurricular activities might now be canceled, the academic work goes on. High schools in Colorado, including Harrison, have transitioned into remote learning, with students completing coursework online.

Every morning, Morris said he wakes up around 6 o’clock, just as he did when he was attending in-person classes. He feeds his animals and gets his day started, then opens up his Microsoft Chromebook and gets started on his school work, which takes him much of the morning and early afternoon.

When the pandemic hit, Morris got a job at Walmart to help pay the family’s bills. He’s since worked about 30 hours per week. After a typical 4-to-10:30 p.m. shift, he heads home and calls it a day. The next morning, the cycle begins all over again.

“People keep making jokes about the class of 2020, which kind of hurt me personally,” Morris said. “We’re still putting in that hard work every single day on the laptops. And people who have college classes [alongside their Harrison work] … still have to take those college tests. And everybody’s thinking that we can just take it easy. … But I’m still doing the work, and other seniors are still doing the work and are committed to getting a better future.”

And though the pandemic has put a damper on his senior year, it hasn’t impacted his goals for the future.Because of the Dakota Promise Scholarship, Morris’ days of structured learning are far from over. He knows that the program has given him an opportunity he never would have imagined less than a year ago.

“I gave my friend the analogy … that going to college is like having the golden ticket to Willy Wonka’s Chocolate Factory or having the winning Powerball ticket that you’re just waiting to cash in,” Morris said.

Whenever the daunting task of college has sewn doubt in his mind, Morris said he simply thinks about his dad and the sacrifices he’s made to help give his son a chance at better life.

“I feel like I owe it to my dad to get a college education,” Morris said. “He dropped out in 10th grade, and my mom was the only graduate in our family. So when I found out I could get this (Dakota Promise) scholarship, it set into my mind that I’m going to [college]. I’m going to  … just be able to be me.”

In December, Colorado Gov. Jared Polis came to Harrison during an event to promote the Dakota Promise program.At it, Morris said Polis told him he could always use commercial trucking as a fall-back plan, but Morris said that in his mind, there’s no turning back.

“My choir teacher always says, ‘Do what you want to do with your life, and you’ll find a way to succeed,’” Morris said. “So that’s always stuck with me.”