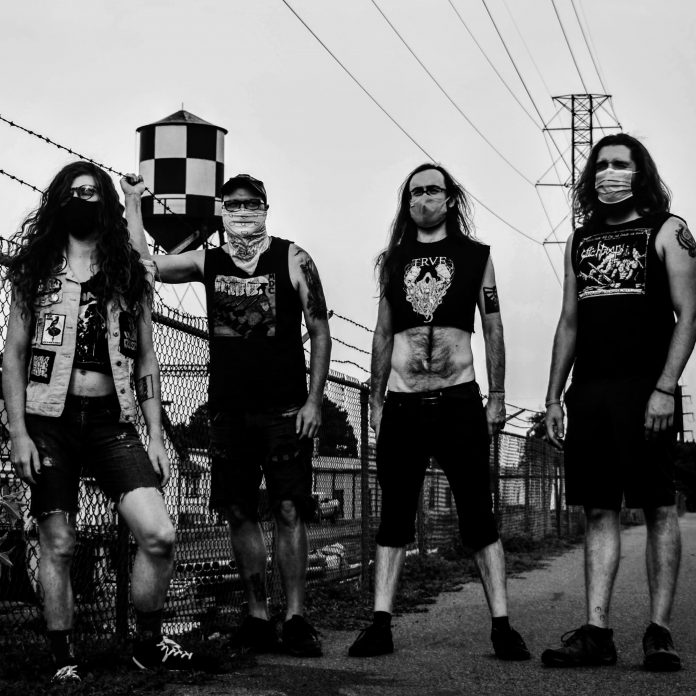 Four years ago, the election of Donald Trump as the president of the United States of America left much of the country in a state of shock. While some celebrated the election of a non-politician, others wept. But  Vulgarian vocalist and co-founder Anders Dread turned to more creative outlets to process their emotions. On the night of the 2016 election, Dread and his roommate hosted a block party with the intention of entertaining themselves and celebrating Trump’s electoral loss. However, watching in horror along with many other Americans, their worst nightmare became a reality. For Dread and his roommate, drummer Thomas Horner, there was only one thing to do — start a political sludge metal band. “We just felt like that’s the only way we could really digest this information that this racist asshole just got elected,” he commented.

While the punk genre has always had a reputation for producing politically charged music, the metal scene has had a more subtle approach to politics. Bands like the Sex Pistols and The Dead Kennedys laid a foundation for the punk genre with albums that challenged political idealism. At the same time, bands were laying a similar foundation within the metal genre as well. 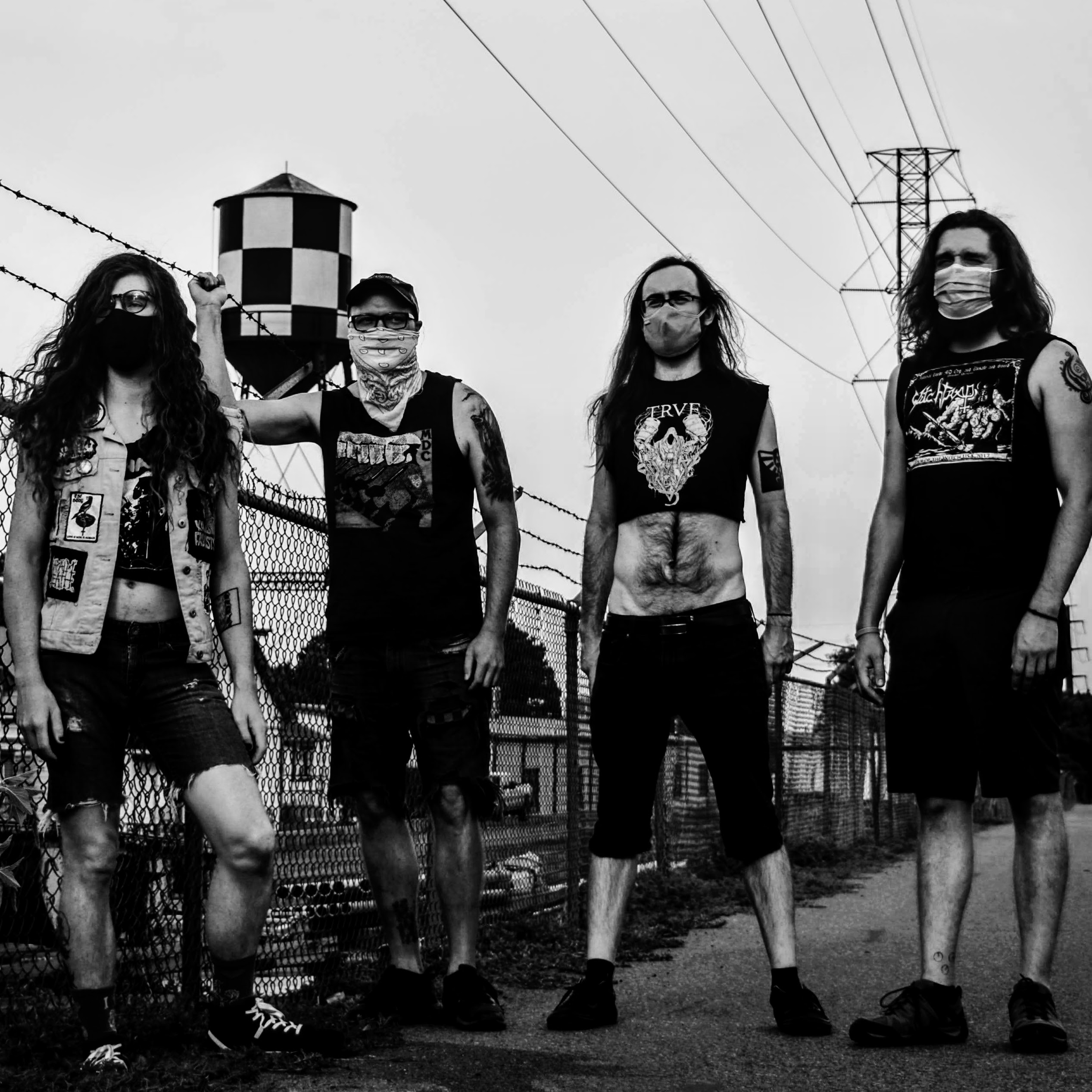 In metal, according to Dread, it was bands like Black Sabbath and Iron Maiden who were the genre’s torchbearers.  However, in the year’s the followed, the metal scene developed a reputation for being a dark and sometimes spooky music community — ultimately losing some of its connection to its roots.

“I think at its core too, extreme metal has been faced with — and punk also — you have bands like Discharge who are extremely influential on extreme metal bands.  I think anyone who is really into extreme music that ignores these foundations – it just has really struck me as odd why people are looking to rebellious music and then believing everything that their grandparents believed about race and politics. It’s an unfortunate state we’re in. But ultimately, I think if you’re honest about any sort of extreme music it’s going to have to be politically charged because it’s outside of the mainstream,” explained Dread.

Though the metal scene may have shifted away from political commentary, bands like Vulgarain are pushing forward with the agenda that the genre needs to take a stance on current events. Even from a historical perspective, early metal songs like Black Sabbath’s “War Pigs” — an outcry against the Vietnam War — have served as a cultural record of major events. Following in the footsteps of the genre’s forefathers, Vulgarian released their debut album in October 2020, making a clear statement of their views on Donald Trump, far-right radicals and a political system in desperate need of change.

While the album was originally scheduled for release in early 2020, COVID-19 and other events throughout the year delayed it, which ultimately allowed the chaos of the year to inform the album. Locally, all of the members of the band were involved with protests over the summer.

“We all participated, every one of us got tear-gassed, or shot with rubber bullets or both,” Dread explained. “I think we benefited a lot, in a selfish way because that actually gave us a lot – we wrote some new songs based on our experiences with that, and really, I think, kind of brought the reality of the things we were talking about to the forefront. We’re all middle-class white guys. So, it’s easy to talk about stuff. It’s not until you’re actually faced with the strong defense of a racist system that you can actually experience some facsimile of what other people experience in this country every day.”

Over the course of four long years, Trump’s administration provided Vulgarian with no shortage of material to inspire music. To get a better idea of the inspiration behind the album, Vulgarian took us through their album, track by track.

Anders Dread: Let’s see, “Human Scum” – yeah. That’s the one that I had to rewrite, it was originally about the impeachment process. But it was also sort of about, what we talked about earlier — this weird group we find in the metal scene and other extreme music scenes, where [people are] being rebellious, but [they’re] also for authority and for, you know, [believing in their] racist grandparents’ thoughts and all this stuff. So, I kept that and then just kind of made it also about the MAGA cult in general. You know, just how these people can consistently defend someone who clearly has no interest in them at all and just the combination of these people and people in our music scenes can have the same thoughts and the same values is pretty shocking to me.

AD: “Thoughts and Prayers” is one of our oldest tracks on the record. Pretty basic, it’s about the armchair saviors of the world. Everyone who thinks they’ve accomplished something — and I’m guilty of this as much as everyone else – by putting a post up or something like that, and feeling like you’ve changed the world. Something I think we all have to have learned this summer is that the only way that change is going to happen is if people hit the streets and people start direct action. Hoping it, praying it, even voting for it is largely just a symbolic measure.

AD: “K.A.W.M.” stands for “Kill All White Men” which we wrote right after the El Paso shooting where the guy went into Wal-Mart and shot a bunch of people because they were brown. That was kind of our response to this culture of victimized white men who feel like they’re owed something just because they’re white, and when they don’t get that they lash out violently. That whole toxic masculinity, I guess you’d call it, is personified in the privilege of white men. It’s obviously an exaggeration because we’re all white men in the band, but I think that’s how we felt at the time.

AD: “Shithole” – this one we wrote after Trump said something about, ‘why are we getting all of these immigrants from all these shithole countries?’ That one I feel really personally about. I spent some time in Africa when I graduated from college – anyways, really rough country, really tough, definitely not someplace I would want to live, but I want people from [what Trump called] ‘”shithole” countries to live here because of the amount of work that it takes to get from that country to here? I can’t even imagine. So, to be so derisive of people who are literally just busting ass harder than any of us can ever imagine and giving everything up – to say anything negative about them is just fucking horrible. So, that’s that song. 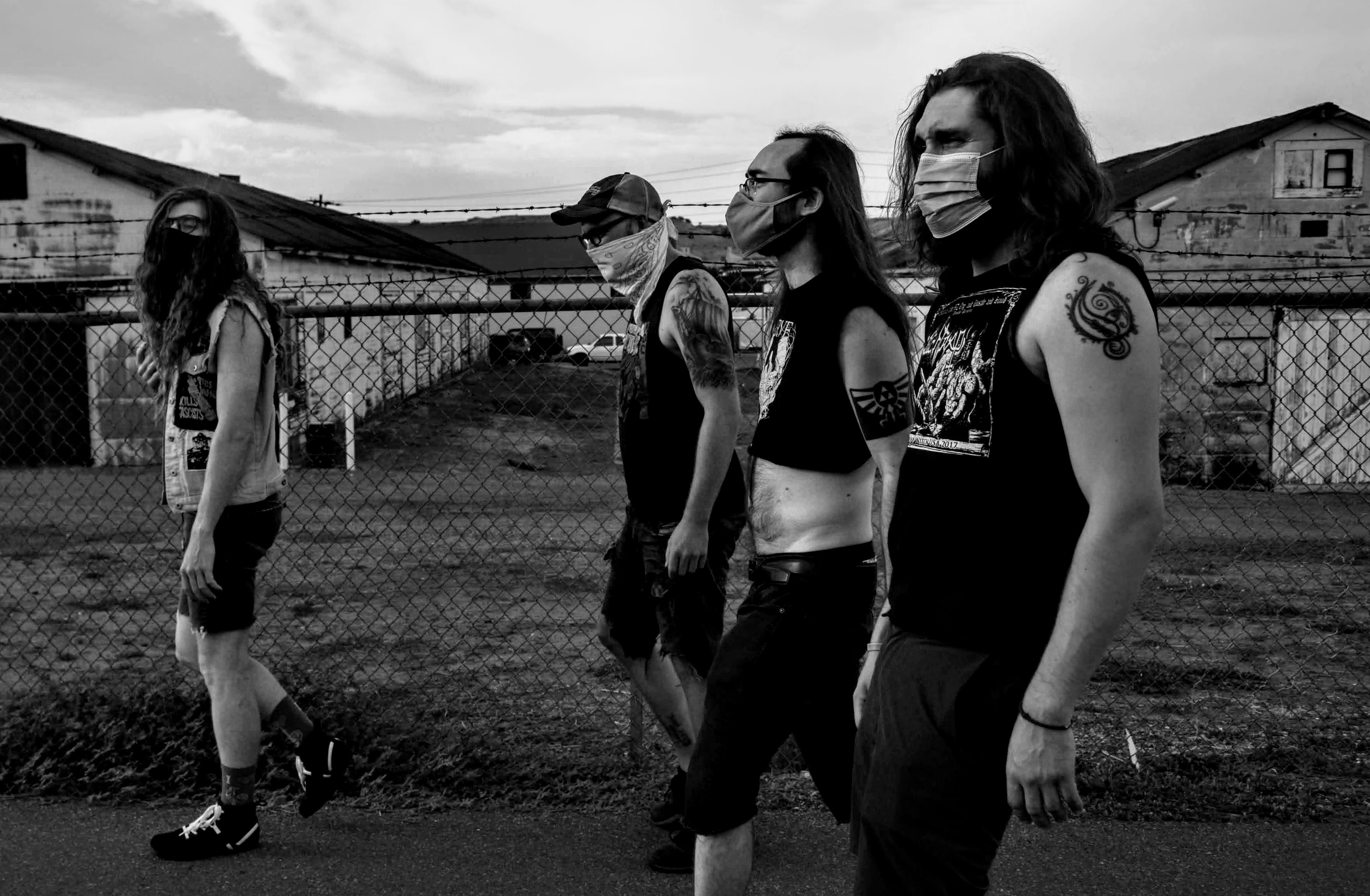 “Give Me Convenience Or Give Me Death”

AD: Firstly, it’s a very blatant Dead Kennedys reference. It’s on a greatest hit album of theirs, which is the first album of theirs I had – love that album. This one is one of the newer songs and we wrote it about COVID. The anti-maskers – it’s basically about how people think that their personal comfort is more important than public safety. I think that encapsulates the Republican party pretty succinctly – it’s just an entirely selfish movement and the anti-maskers are the pinnacle of that where they can’t even put a god damn fuckin’ mask on for 20 minutes to go to the grocery store? It’s not that hard. So, we have these people freaking the fuck out just because they’re being asked to be citizens and asked to be part of society in the loosest sense of the term, and they’re unable to do it.

AD: “Disinformation Age” – that was the last song we wrote. It was really at the height of people in vans taking people off the streets – the craziness that was the summer. It’s largely about how we move from this age of disinformation or whatever you want to call it, to full-on fascism, which we’re still teetering on right now. Just the subtle push that it takes from people completely not believing in facts to people only believing in state facts or you know, the leaders’ facts or whatever it manifests itself into. I think back then we were really close and right now we’re getting close again. We’re sitting on the edge of a ton of people wanting to overturn an election just because they didn’t like the result. Once again we’re flirting with where you draw that line between a flawed state and a full-on totalitarian state.

AD: Again, this song was written right around – after and in between protests, we wrote this song for obvious reasons. Once again, it was just reported a few hours ago that the officer who shot Jacob Blake is not going to face any charges for shooting someone in the back however many times. It just keeps going. This song is about the police and the fact that they shot at me and my friends and loved ones for no reason other than that we were out expressing our displeasure of the way they’ve handled their jobs. I think if anyone was active and didn’t have blinders on, your perception of how the police function and what their function is had to have changed a little bit. So, it’s fully a call for defunding the police, abolishing the police and finding a solution for all of these problems. Also, [the song is titled ] DPD and the song is about the Denver police department and the Aurora police department, Elijah McClain and also calls out specifically Breonna Taylor and George Floyd because those were murders and they happened and at least they’re somewhat immortalized through that.

“Drown in the Swamp”

AD: Pretty basic song, it’s really just about drowning the [ex]-president in the swamp. It’s more just the visceral rage of what he’s done. I think there’s a line about 150,000 coronavirus deaths and that’s already out of date, so we’ll have to update that one. You have someone who, even if you ignore everything he did the previous three years, this last year he has the blood on his hands for how poorly he’s handled this and outright lied about the pandemic, combined with stoking racism. I think it’s exactly what he deserves.

303: Your song titles are fairly violent but as you walk us through your album it doesn’t seem violence is what you’re promoting?

AD: As for your question, I think the answer is two fold. On one level, for example within the context of “Drown in the Swamp,” am I literally calling for Trump to be drowned in a swamp and broadcast for the world to watch? No, I think he should rot in prison for the rest of his life. That would be a far more just fate. However, I do think it is part of our white privilege to think the problems of racism and fascism can be solved merely through public gatherings and/or legislation. There are a lot of people in this country willing to violently defend the ideals of white supremacy, and we saw this on January 6th. Any serious commitment to combat white supremacy requires at least the acknowledgment that the right is willing to be violent. Furthermore, I feel we also learned over the last year that the only way actual revolutionary change is possible is through direct action. Martin Luther King Jr. famously said, “…riot is the language of the unheard.” At some point, people need to be awakened from their comfortable lives and until that happens there will never be actual change, just lip service and half measures to appease.

All photography provided by Vulgarian.