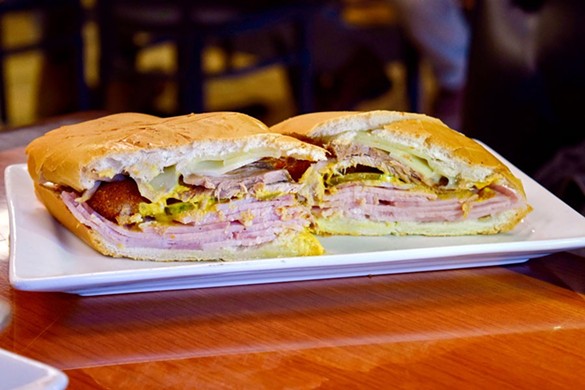 Year-and-a-half-old Havana Grill recently moved north to 2165 Academy Place, the site of the former Brayla Wedding and Events, which as of the summer of 2019 began hosting the 719 Hump Day Food Truck Rally. What that triggered: The food trucks now park nearby at Copperhead Road on Wednesdays, and the former Havana Grill spot at 3748 Astrozon Blvd. has become El Taco & La Arepa Venezuelan & Mexican Grill.

As for Havana Grill, co-owner Carlos Rodriguez says the new location has “everything we were looking for,” and that after one week open, response “has been amazing.” The team has essentially quadrupled its capacity, capable of seating up to 215 people for dining service (with more tables capable of being set up, he says, noting an overall capacity of 441). That means jumping from seven staff at the old spot to 28 people for weekend nights, when Fridays bring family-friendly karaoke and Saturdays usher in club nights, with free salsa lessons from 8 to 9 p.m., followed by live music or sets by resident DJ DjDannyblaze (Danny Baez) for the 21-and-over crowd until 2 a.m.

Baez spins nightly (except for Sundays, when the venue closes for private parties) and Rodriguez credits production manager Victor Carbonell for helping get Havana Grill to the next level as a legit concert and dance venue, now hosting 24 laser lights and a couple C02 cannons amidst its party arsenal. So, “we’re a restaurant with a music venue,” explains Rodriguez, also listing off four pool tables (with leagues coming soon), an arcade room and dominoes tables. The bar hosts a full beer, wine and spirits menu with mojitos being the best seller by far, while the Cuban food menu remains unchanged, just expanded greatly in daily output.