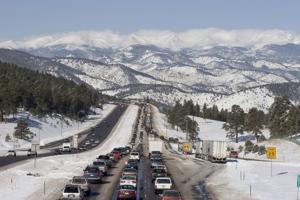 A hazmat spill on I-70 snarled traffic Friday morning and is expected to cause heavy delays through the afternoon for traffic traveling into the mountains, according to the Colorado Department of Transportation.

The backups were caused as crews cleaned up a spill from a crash involving a jack-knifed semi-truck along the westbound lanes at Dumont, at mile point 235, CDOT said. While traffic began flowing through one lane, officials said travel from Denver to the Eisenhower Tunnel could take more than two hours.

While the crash was not weather-related, CDOT warned motorists to be prepared for the incoming storm that could severely impact travel across the state.

“If you absolutely need to make essential travel during the storm, be prepared for road closures and severe conditions on roads that are open,” CDOT said in a press release. “Carry emergency supplies, food and water, and ensure your vehicle is equipped for the conditions.”