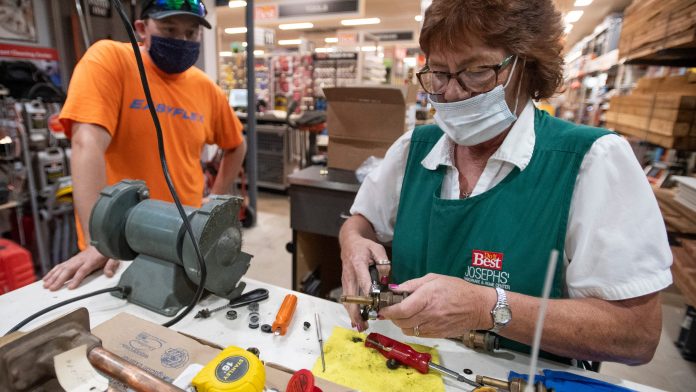 “It’s been very good,” he said. It hasn’t been easy, but sales of paint, lumber, home improvement and organizational material soared in April and May at the store, 2160 Drake Road.

“People took a more critical look at the condition their homes were in,” Chavez said. “That drove sales of paint early on.”

As spring rolled around and people were still stuck at home, “people who had never been into gardening before ventured into gardening.” And people stocked up on cleaning supplies and organizational items “as they sought to impose some order in their homes,” he said.

The activity helped Fort Collins’ tax picture look less horrible in May than April. Sales and use tax revenue — about 50% of government revenue — was just over $11 million in May, down 3.5% compared with last year, according to the city’s sales and use tax report released Friday.

Taxes on purchases made in May are paid in June and reported in July, a lagging indicator of the city’s economy.

Sales taxes on building materials, garden equipment and supplies were up nearly 25% in May over April; use taxes paid on building permits were up more than 57%, helping fuel the overall revenue picture.

The city isn’t ready to breathe easy, however. “All it does for us is drive additional uncertainty,” Storin said. “Maybe the picture for the year has stabilized, but we don’t necessarily have a good handle on what will come in 2021 and beyond.”

Thus far, the city is looking at about a $15 million revenue drop in the second quarter, which ended June 30. The city is anticipating a $31 million shortfall for the year, Storin said.

The city’s finance committee is expected to discuss the revenue picture on Monday, Storin said.

“We’re neutral in terms of what we think will happen,” he said. “We’re still planning as if we’re going to have the shortfall of $31 million throughout the fiscal year.”

The federal government’s stimulus checks — $1,200 per individual, $2,400 for couples and $500 per child — in addition to the additional $600 in weekly unemployment money “may have had an impact on consumers’ spending patterns and could represent a one-time infusion in the economy,” Storin said.

Chavez isn’t sure either if his growth in sales will continue or whether it’s a blip caused by the pandemic. “We know it’s an anomaly … we’re trying to figure out how much it might persist in years to come.”

Chavez believes Josephs’ will likely hang on to some new customers. “There’s always been that ‘buy local’ sentiment … and it may be strong now because of the perception that small businesses were going to suffer. It’s not lost on me that we’ve been very fortunate.”

Josephs’, which will begin its 10th year in September, saw spikes in lumber sales, fencing lumber and any lumber that might be used to create new office space, Chavez said. “We’re not big in the lumber game, but we sold a lot of what we had.”

Consumers, especially on the west side of Fort Collins, “found comfort” in the neighborhood store’s early face-mask policy imposed April 3. “Customers felt like we were maybe a safer place to shop,” Chavez said. “For a while we were the only place to shop short of a grocery or liquor store.”

Building and home improvement stores, including garden centers, sold more than $32.2 million worth of goods in May, generating $1.25 million in tax revenue.

And building permits generated $689,000 in use tax payments, according to the city report. “It’s encouraging to see 25% growth,” Storin said. “It’s a good thing overall for the economy.”

All things considered, 28% was not bad, Storin said. “That’s not to minimize the suffering. It’s a really challenging environment.” But improving on April’s sales tax revenue showed restaurants “were pretty adaptable” to other ways of providing service, including curbside pickup, delivery, and resuming patio and inside dining.

“We could have expected it to be worse,” Storin said.

Source: City of Fort Collins sales and use tax report