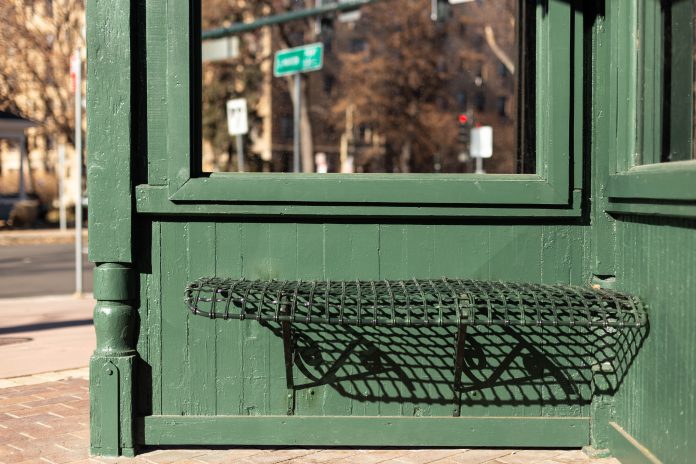 Heading south on Downing Street in Denver can be a traffic-filled commute on workdays, so you probably notice little else than Washington Park and the car in front of you. For joggers and dog-walkers in the neighborhood, however, the once dilapidated structure on the corner of Downing and South Marion Parkway is now a calming retreat from the busy streets.

At first glance, the remodeled structure might appear like another covered bench area you’d find within Wash Park itself, but it’s actually a historic trolley stop — recently restored by HistoriCorps, a 501(c)3 nonprofit that sponsors volunteers to help preserve historic structures on public lands across America. 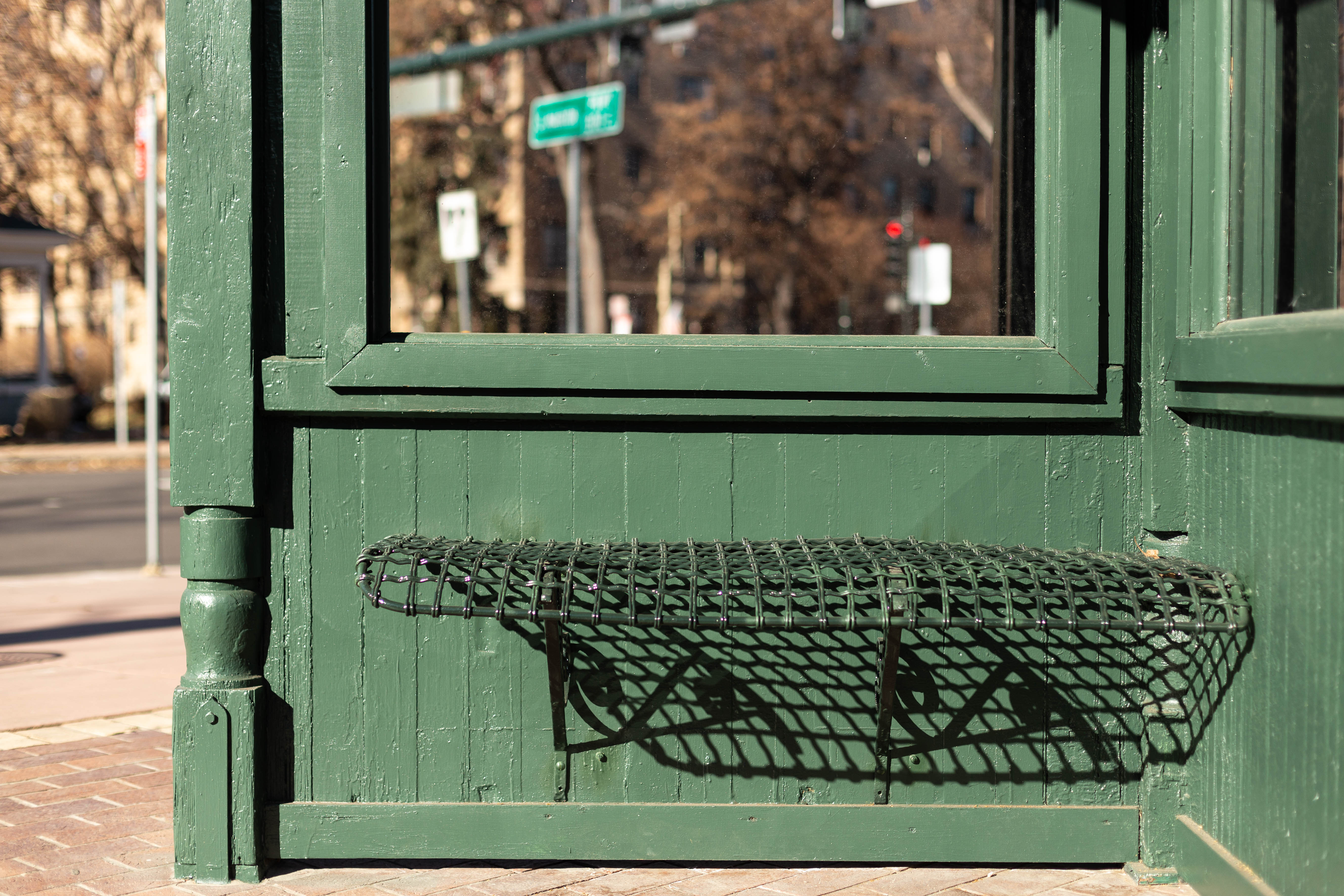 The trolley stop, which is believed to have been erected in 1904, fell into disrepair over the years (since the trolleys stopped running in 1930) until Julie Hutchinson, a former reporter for the Rocky Mountain News and resident in the neighborhood, acquired it in the ‘80s and worked to restore it before Denver Parks & Recreation decided to take further steps to preserve it.

“They [Denver Parks & Recreation] took an inventory of some things the city needed to work on, but they couldn’t find a contractor to take this on, so they began to brainstorm,” Mark Broyles, the Chair and Associate Professor of Architectural Technology at the Community College of Denver, said.

According to Broyles, Denver Parks & Recreation reached out to see if some of his students might be interested in taking on the project. It was obvious to Broyles from the beginning that he wanted to partner with HistoriCorps.

“I’d been talking to HistoriCorps about doing something together and this seemed like real potential. I thought this might be it,” Broyles said.

HistoriCorps projects are mostly volunteer-based, but the trolley stop seemed like a great opportunity for architecture students to learn proper restoration techniques. After three weeks of work sessions in all kinds of weather, the new trolley stop was revealed to the public in November.

According to Broyles and Sarah Mees, the project supervisor and manager at HistoriCorps, the trolley stop was a more complex project than they’d anticipated. 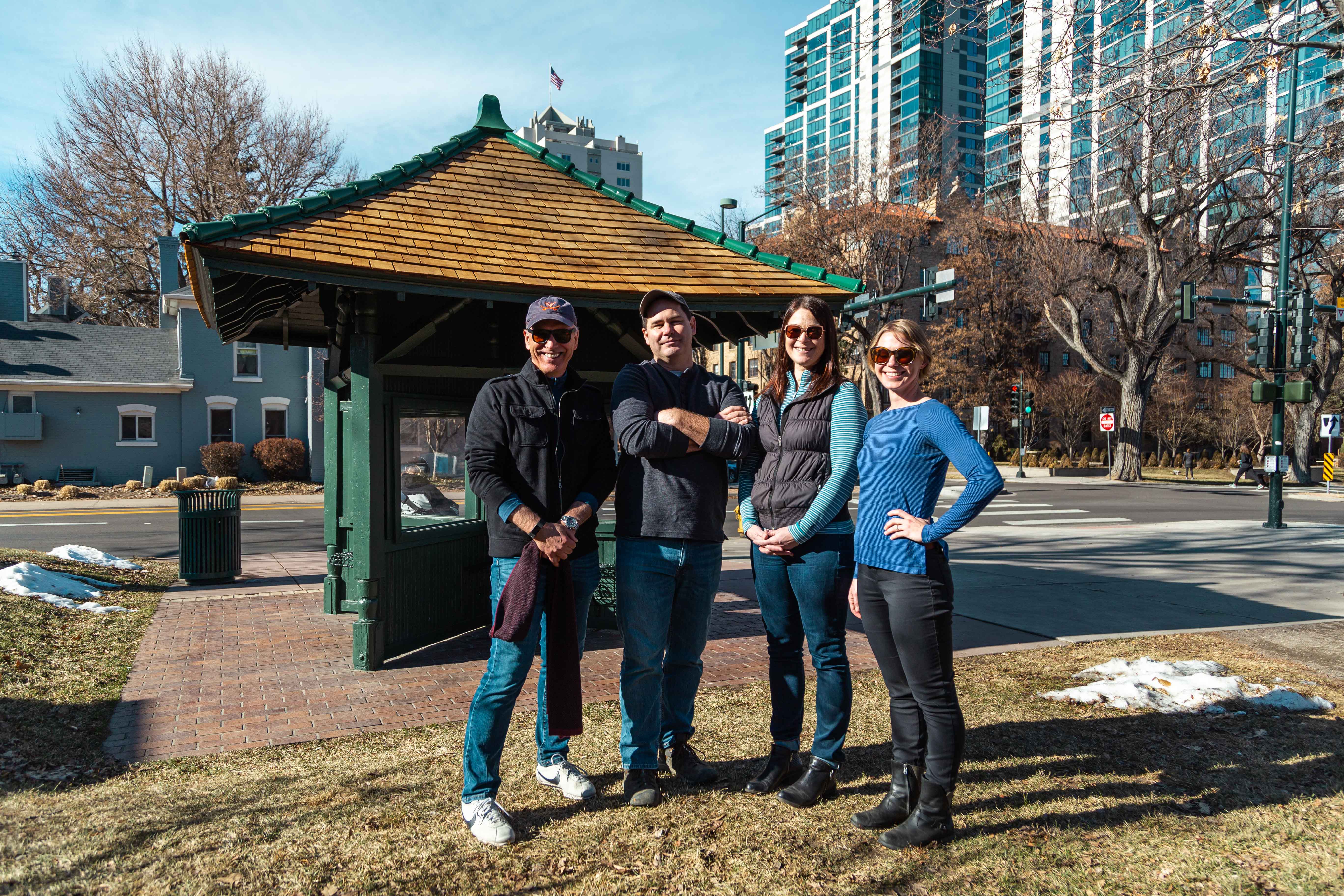 Mees said that since a lot of the original wood was deteriorating, a new roof was necessary. The crown molding, in particular, was hard to recreate.

“We had it [the molding] cut at a local mill, which took three weeks longer than it should have and was expensive,” Mees said.

The layers of paint were also hard to strip. The restored trolley stop, which is now painted the same dark green as other park structures in and around Denver, used to be multicolored.

“It was really thick — the paint. There was definitely a tan phase to it,” Mees said.

“When we scraped it down, we saw a number of different colors. Julie Hutchinson told me that when she began working on it this thing, it looked like it came out of a carnival  — whatever that means,” Broyles laughed.

In addition to the trolley, HistoriCorps also has plans to restore other structures in Denver and around the state. Broyles says he is interested in working on some of the older buildings on the Auraria campus that he and his students pass by every day.

“Since we’re right there, it seems like a great opportunity to find the campus’ needs and preserve those buildings,” he said.

Although there are many stunning historic homes and other structures around the Mile High City in need of repair, Liz Rice, the workforce manager for HistoriCorps, says that the nonprofit’s mission is to focus on only buildings that will be directly used for public benefit.

“Everything that we do as part of our mission is for the public good. So if we were to restore a private restaurant or a private home, that’s not necessarily for public benefit. We restore historic and cultural buildings on public land,” Rice said. 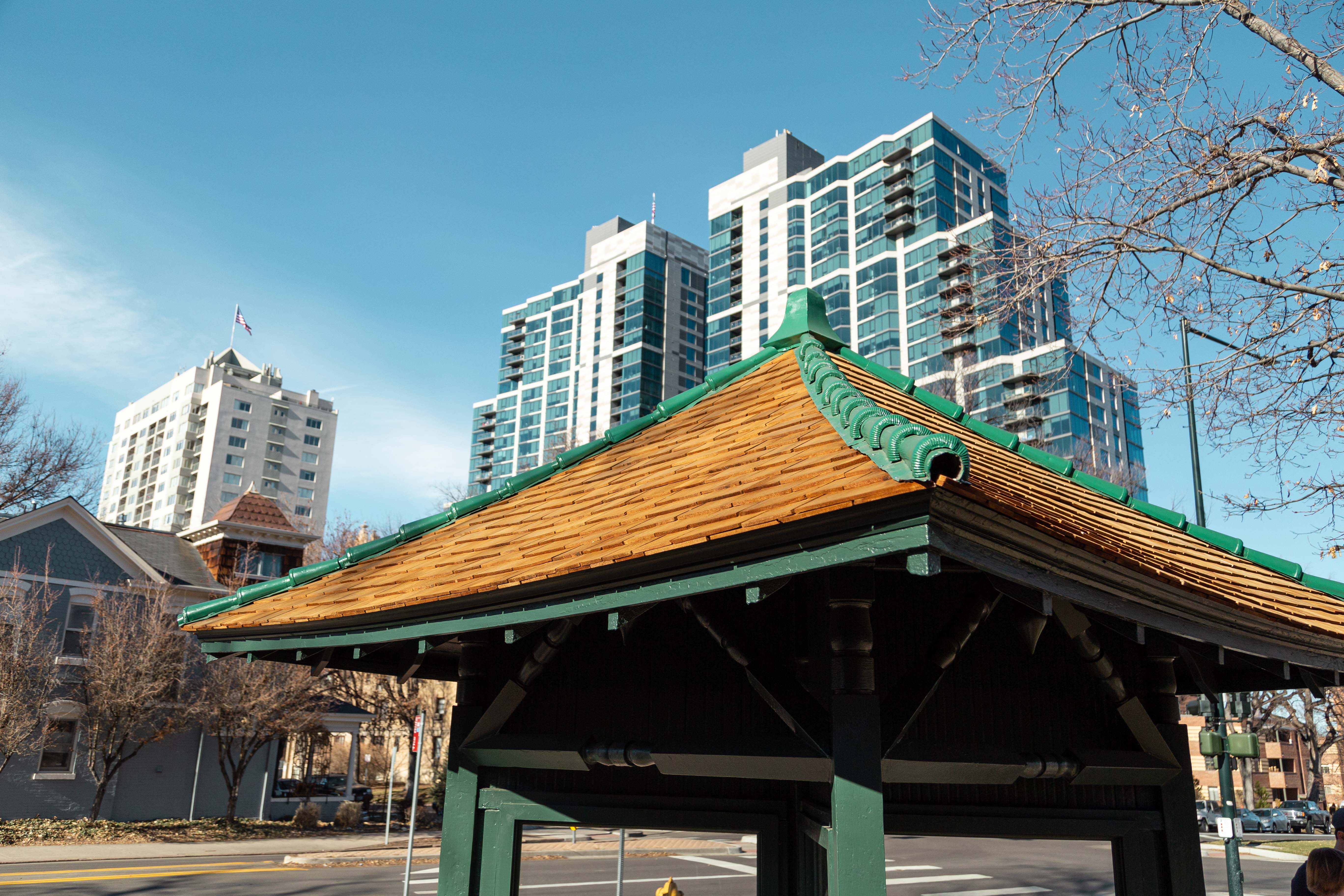 Many upcoming projects in Colorado and completed ones over the nonprofit’s 10 years of service involve structures in the Denver Mountain Parks, which often go unnoticed. While some of the parks owned by the City and County of Denver are extremely popular, for example, Red Rocks Amphitheatre and Winter Park Resort, others are more off-grid.

Working in the mountains poses its challenges. According to Mees, a particular site on Hahns Peak near Steamboat Springs at an elevation of 11,000 feet was incredibly difficult due to thunderstorms and physical labor. The crew had to haul up sand and water in addition to other supplies and hike up the mountain repeatedly.

The hard labor involved means the more volunteers, the merrier. HistoriCorps is always looking for more volunteers to camp and offer extra working hands. The nonprofit feeds all of its volunteers and experience in historic restoration or construction isn’t required. Jason Whitehead, the director of operations for HistoriCorps, is always determined to make it work, but some of the sites are more challenging than others.

“No project is too hard!” he said. “Not all of our projects end up looking as beautiful as this — finished, complete and ready to go. For some of our projects, we are brought in to literally save them — stop the deterioration, stop them from falling down and buy them time.”

The hard work is worth it. In addition to the trolley, HistoriCorps has restored the Dodge Lodge in Jefferson County used primarily for outdoor education, the Hog Park Guard Station on the Encampment River, the Johnson Stage Stop outside of Gunnison, the O’Fallon Chimney & Little Park Wellhouse near Denver, the Pruden-McGilvery Cabin outside Boulder and the Soderberg Ranch at Horsetooth Mountain Open Space near Fort Collins in 2019 alone. 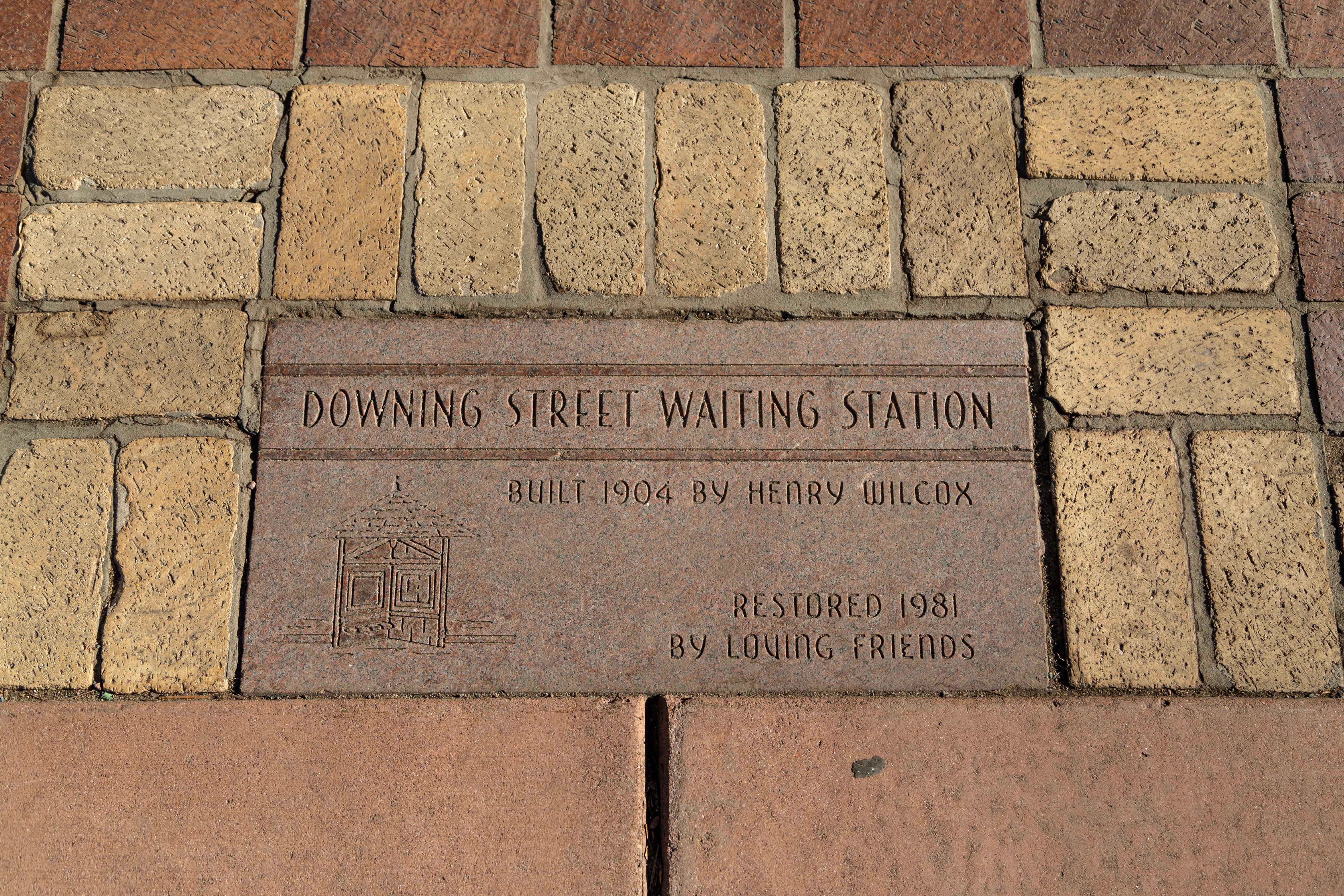 “If something is in a state of disrepair, it might be more subject to vandalism. People might want to break glass or take pieces away or something, but when something is obviously restored, it looks fresh. It looks nice. People are less likely to have that impulse,” she said.

For Broyles, his passion for restoring historic buildings and structures centers around environmental sustainability. Although the city could have erected a brand new trolley stop, Broyles believes there’s a lesson to be learned from preserving the old one.

“New is not bad, but it’s almost never better. Many of us in architecture talk about how the most sustainable building is the one you don’t have to build or the one you don’t have to tear down. All these older buildings around here are a cultural legacy,” he said. “We learn lessons from these buildings for our future in a fossil-free world. It costs huge amounts of energy and resources to build something new. If we can just keep these buildings alive around us and repurpose them when necessary, it’s a huge benefit to society in terms of energy and resources.”

Rice, Whitehead and Mees all agree that an understanding of historic architecture is important for city planning.

“If we don’t know how Denver became Denver, how can we really plan for its future? If we don’t know where we came from, it’s very difficult to advance and grow,” Rice said. 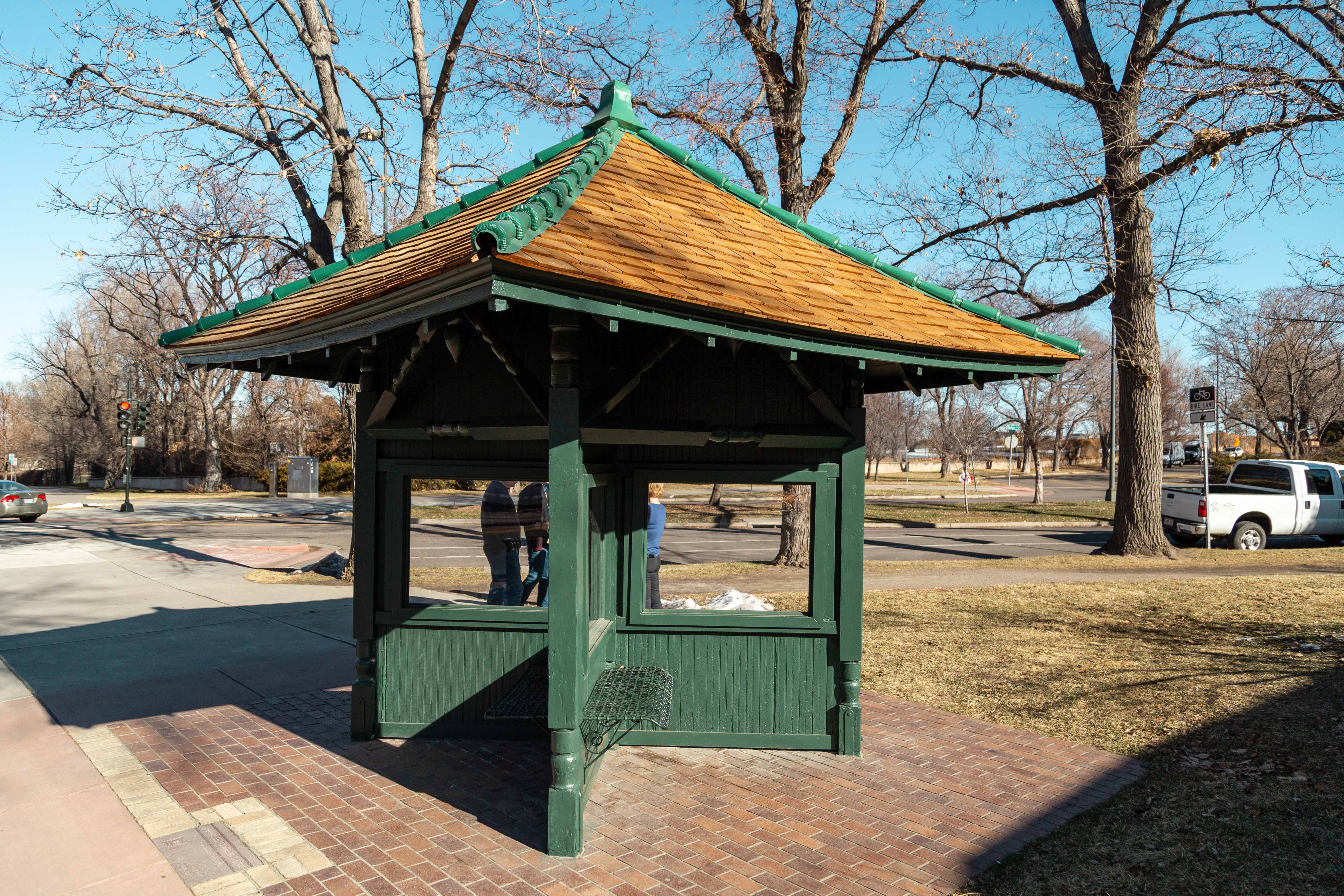 To volunteer with or learn more about HistoriCorps, visit their website.