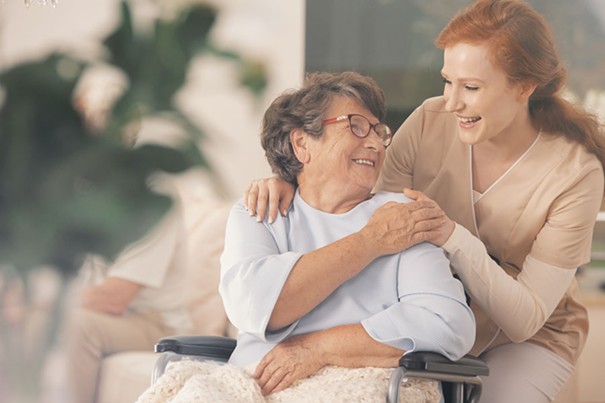 The state’s Medicaid system, operated by the Colorado Department of Health Care Policy & Financing (HCPF), recently came under fire from a group of hospital executives who represent more than 80 percent of hospital care in the state.

In a Nov. 21 letter to Gov. Jared Polis and HCPF, the executives wrote that state Medicaid policies were “endangering patients” and “putting their health information at risk.”

They addressed an array of concerns — including an inefficient pre-approval process that can delay urgent surgeries, “antiquated” requirements for faxing paperwork, denials of payment for surgeries and hospital stays that have been pre-approved, and gaps in mental health and substance use care.

The letter made headlines across the state. But hospital executives aren’t the only ones hoping to address what they perceive as care inefficiencies for Medicaid patients, who include low-income adults and children, the elderly, and people with disabilities.

A group of local home health agencies recently teamed up with Colorado Community Health Alliance (CCHA), the Medicaid administrator for Region 7 (which includes El Paso, Park and Teller counties), in hopes of solving a persistent problem that costs agencies tens of thousands of dollars each year in uncompensated care for Medicaid patients.

The problem has less to do with state policy than with paperwork.

Medicaid patients who need skilled, long-term care at home from a certified nursing assistant (CNA) or registered nurse (RN) must have their doctor sign an order every 90 days so Medicaid will cover that care.

But The Independence Center, a local nonprofit for people with disabilities that operates its own CNA school and home health agency, noticed those orders weren’t coming back on time to bill Medicaid. When they did, they often weren’t signed by a doctor of medicine (M.D.) or a doctor of osteopathic medicine (D.O.) as required, but a physician assistant (PA) or a nurse practitioner (NP).

“It’s a constant push and pull to get these orders signed,” Indy Frazee, The Independence Center’s home health administrator, told an audience of state legislators at a November breakfast. “We are required by CMS, the federal Centers for Medicare and Medicaid [Services], as well as the state, to have those orders in place before we can bill. So this really leaves agencies vulnerable to providing care and potentially not getting paid … .”

So this spring, the nonprofit convened a task force of home health agencies — who, Frazee notes, are normally extremely competitive — to discuss the issue.

Turns out, The Independence Center wasn’t the only one losing money because doctors weren’t signing the orders on time. The home health agencies it surveyed were each having to write off somewhere between $10,000 and $75,000 a year in uncompensated care, Frazee says.

Since then, the task force has been working with CCHA to inform providers about the importance of having the orders filled out by the correct person and returned promptly.

There’s been some improvement, and the group is now focused on communicating with a specific set of medical practices that serve high numbers of Medicaid patients, Frazee says.

Maxim Healthcare Services, a local home health agency on the task force that primarily serves Medicaid patients, is among those that have written off care when orders weren’t returned, says Jimmy Wade, Maxim’s director of business operations. Wade declined to give a dollar figure, but did say he’s optimistic about the group’s efforts to reach doctors.

“I don’t think it’s immediate progress, but I think it is a step in the right direction in the fact that we’re working together as a team, and then some of the M.D. offices are starting to be more receptive to the approach,” Wade says.

The Independence Center thinks it may have found a solution.

Frazee and her team hope that if state policymakers find a way to allow PAs and NPs to sign the orders every 90 days — taking some administrative burden off of doctors — then home health agencies could stop losing so much money.

Wendy Farr, who handles community affairs and marketing for the El Paso County Medical Society, agrees that flexibility makes sense, as long as the doctor still signs the original order.

Farr, who once owned her own home health agency, is familiar with the paperwork frustration, but she stresses that doctors shouldn’t shoulder all of the blame.

“The physicians in our community that are willing to take those Medicaid patients — we would be, and pardon my expression, so screwed without those doctors,” Farr says.

Farr explains that because Medicaid reimbursement rates for providers are so much lower than for other types of insurance, relatively few doctors in El Paso County accept Medicaid. That means each of those doctor’s practices may serve thousands of patients, she says.

“Just so they can keep their doors open … they have to use the PAs or nurse practitioners rather than a lot of doctors, because they have to balance the lower reimbursement under Medicaid for the amount of work that they’re doing,” Farr says. “And it can be really overwhelming.”

She recommends that practices specifically designate a staff member with the responsibility of keeping track of the orders and bringing them to the doctor to sign.

The home health agencies’ complaint is one of many plaguing Medicaid providers and patients in Colorado, but for now, at least, the dialogue around delays for home health orders is not nearly as bitter as the war of words between hospitals and HCPF.

“At a time when we all need to work to reduce medical costs, Colorado’s Medicaid office is increasing health care expenses and providers’ losses, while overall Medicaid reimbursements have fallen to the lowest level in eight years — just 69% of overall costs,” their letter says.

They ask Polis and HCPF to “work with us” to fix the problems within the next 90 days and that the state properly pay hospitals for the care they provide.

Their letter came the day after a statement from Polis’ office touting that because of health care reforms installed by the state under his leadership, citizens will save 20 percent on average when buying health insurance through the state exchange. (Those receiving federal government subsidies on plans purchased through the exchange could see costs increase.) In that statement, Polis also noted the state’s efforts to adopt a prescription drug importation program and work toward a public option.

None of those reforms directly affect Medicaid care, however.