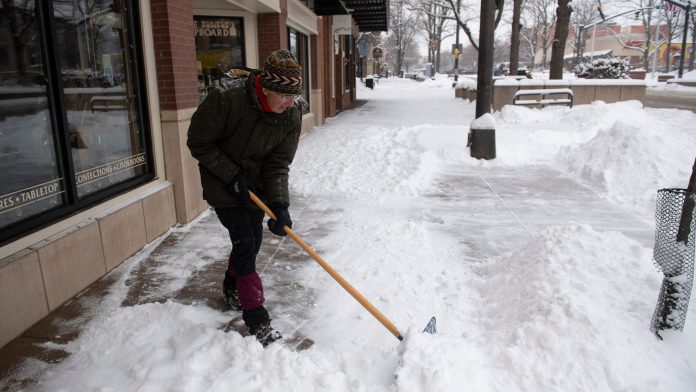 People love to complain about the weather and maybe even more so about the lack of accurate forecasting.

Despite major advances in computer modeling in recent years, accurately forecasting snow and rain totals can be especially difficult in Colorado. The state is considered among the toughest regions to accurately forecast weather, according to experts.

This is mostly because of the influence of terrain, including the mountains, but also because of more subtle influencers such as the Palmer Divide and Cheyenne Ridge and the Denver Convergence Vorticity Zone, which played a role in our most recent storm.

Many people don’t care about those things and just want an accurate weather forecast.

There are many TV and private business meteorologists in Colorado. But let’s take a look at the accuracy and lead time of the National Weather Service’s snow total forecast for the biggest snowstorm this season for the Interstate 25 corridor.

You might be surprised how accurate the forecast was.

Snow squall warning: What does it mean

Fort Collins received 9 inches of snow during the two-day storm, with 1.2 inches on Tuesday and 7.8 inches Wednesday, according to the Colorado Climate Center. Reports from around the city varied from 7.5 inches to just more than 10 inches.

On Monday, the National Weather Service forecast for Fort Collins was 4 to 6 inches, but the weather service doubled its forecast to 8 to 12 inches Monday evening as the storm approached.

The weather service also has a feature called a probabilistic snowfall forecast that is a percentages-based model of varying snow totals for various cities in Colorado.

The low-end forecast for Fort Collins was 5 inches, the high-end forecast was 12 inches and the expected amount was 10 inches.

The National Weather Service forecast for Greeley predicted 6 to 8 inches of snow, and reports from the city ranged mostly from 5 to 8 inches.

The weather service forecast for Boulder was 8 to 12 inches, and reported totals ranged from 8.3 to 10.5 inches.

Like with Fort Collins, by Monday night the weather service doubled Denver’s expected snowfall from its morning forecast, making the city’s forecast total 8 to 12 inches. Reported totals ranged from 6.3 inches in Denver to 10.5 inches in Aurora, with many stations reporting 8 to 9 inches.

Sometimes referred to as the Denver Cyclone, this condition forms east of Denver when a low-level moist, southeasterly flowing air mass meets the Palmer Divide, a ridge that extends east of the Front Range between Denver and Colorado Springs.

The convergence of this air mass and winds coming off the foothills creates what’s called an enhanced cyclonic vorticity. The effect is most noticeable in warmer months and plays a role in creating tornadoes.

The Monday night forecast for the Colorado Springs area was 8 to 12 inches. Many of the reporting stations in the city measured 7 to 10 inches.

However, three sites southwest of the city reported 24, 18 and 22 inches, the highest totals from the storm. Even then, the weather service forecast called for 12 to 18 inches of snow for a small pocket in that area.

So despite some fine-tuning as the storm approached, the National Weather Service mostly nailed this storm in regard to timing of the event and snow totals.