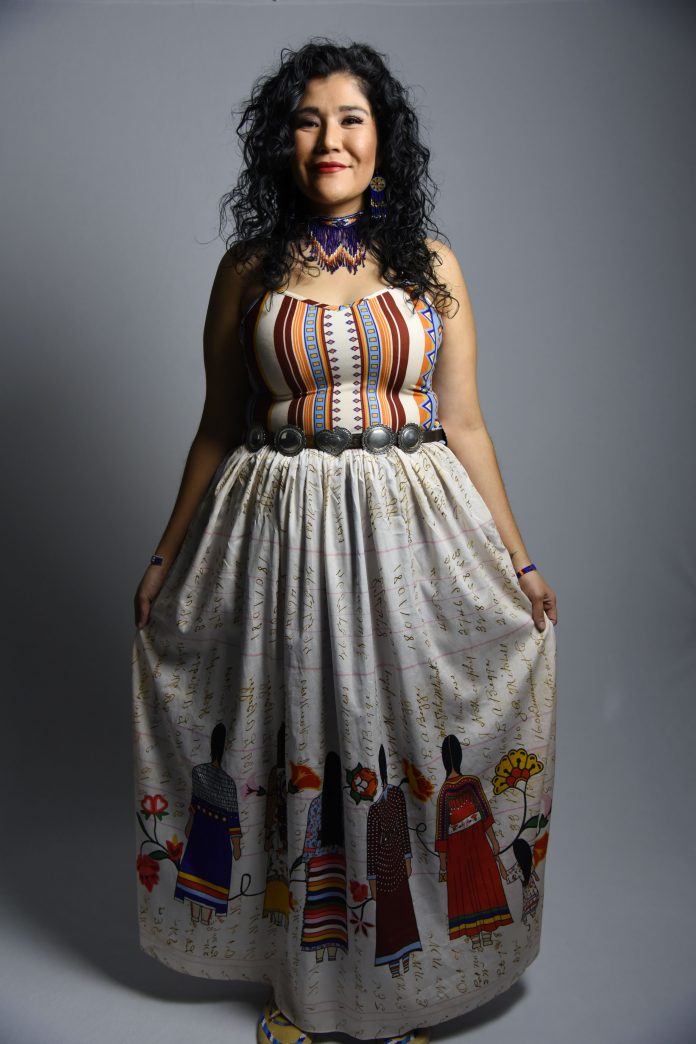 On the Southern Ute reservation in Ignacio, Colorado, a young Tanaya Winder would record cassette tapes of herself singing and send them to her grandparents. “I think for us as indigenous people, songs have always been a part of everything. You sing for so many different occasions — you sing in ceremonies, you sing for healing, you sing to honor people who have passed away,” she told 303 Magazine. “Song is deeply ingrained in us.”

Yet for many years, Winder’s voice lived solely on the page. She dug into her soul and spirit to harvest those deep-rooted songs, and pulled up words — poems. They were vital, invigorating and widely resonant. Joy Harjo — the United States’ first Native American Poet Laureate, and Winder’s dissertation advisor at the University of New Mexico — wrote that Winder’s debut poetry collection was “the love song of a generation.” “The poet,” Harjo pronounced, “has learned how to fly.”

But Winder’s voice still hadn’t danced through the air. Though she began performing her poetry aloud as a graduate student — one of her first gigs was giving her own TEDx Talk — she hadn’t found the courage to pair words with melody. “Grandmother, when did you first learn how to sing the songs you carry?” she wrote in a poem called “Extraction” published in The Rumpus in 2018.

I could say that this Colorado artist and educator — who is Southern Ute, Pyramid Lake Paiute, Diné, and Black — eventually reclaimed her singing voice and taught herself to make music because it’s true. But it’s also not the full story — especially since her journey back to her own musical voice began by helping thousands of indigenous youth find theirs.

It’s best to start with the making of the Dream Warriors — a collective of indigenous artists who are all managed by Tanaya Winder. 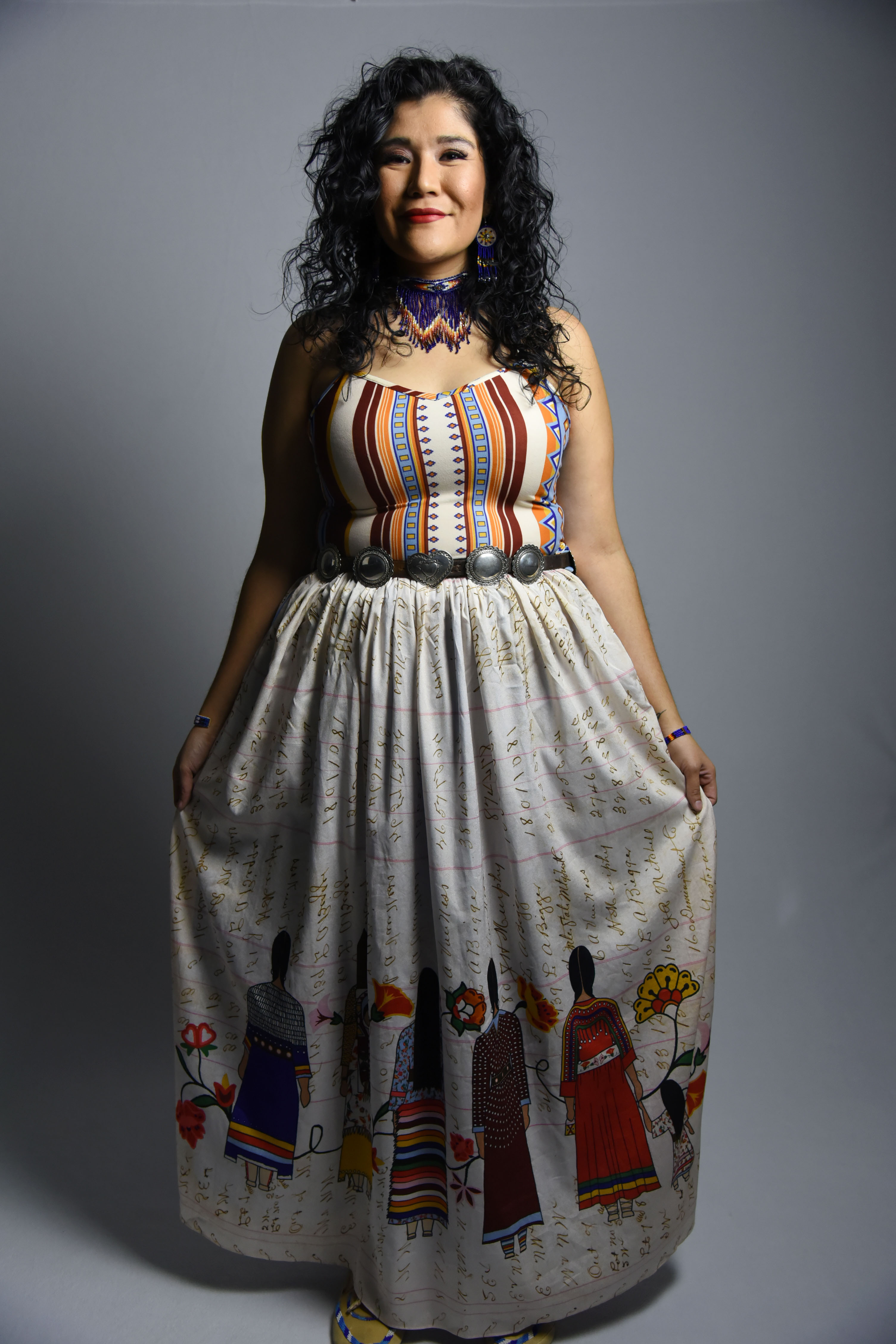 In 2015, Winder was grabbing a quick bite at Moe’s Bagels in Boulder with Sicangu Lakota rapper, Frank Waln, and the hoop-dancing Sampson Brothers of the Mvskoke Creek/Seneca nations.

They had performed the day before for an event with Sacred Voices (at that time called Café Cultura,) a Denver-based organization that holds open mic nights and poetry/spoken word workshops for underserved youth. Speaking of that event, Winder recalls, “I didn’t know what was happening. So many people were wanting autographs or to buy merchandise, and I was trying to help organize people, because that’s, like, my job,” she laughed. Indeed, her day job was serving as the director of the University of Colorado Boulder’s Upward Bound Program, which supports 103 Native American high school students from five states, 12 high schools, and five reservations across the country. It’s a position she still holds today.

“We need a manager!” Waln exclaimed between bites of a Moe’s bagel. Winder replied that she’d do it because she thought he was joking. “I had never managed anyone. I didn’t realize I had already been managing myself,” she reflected now. But from a place of doubt, she told them all then, “Yeah, one day when you guys are famous, I’ll be in your documentary saying that I was your manager in the beginning.” At that, Waln and the Sampson Brothers shook their heads. “No,” they retorted, “You’ll still be our manager!” 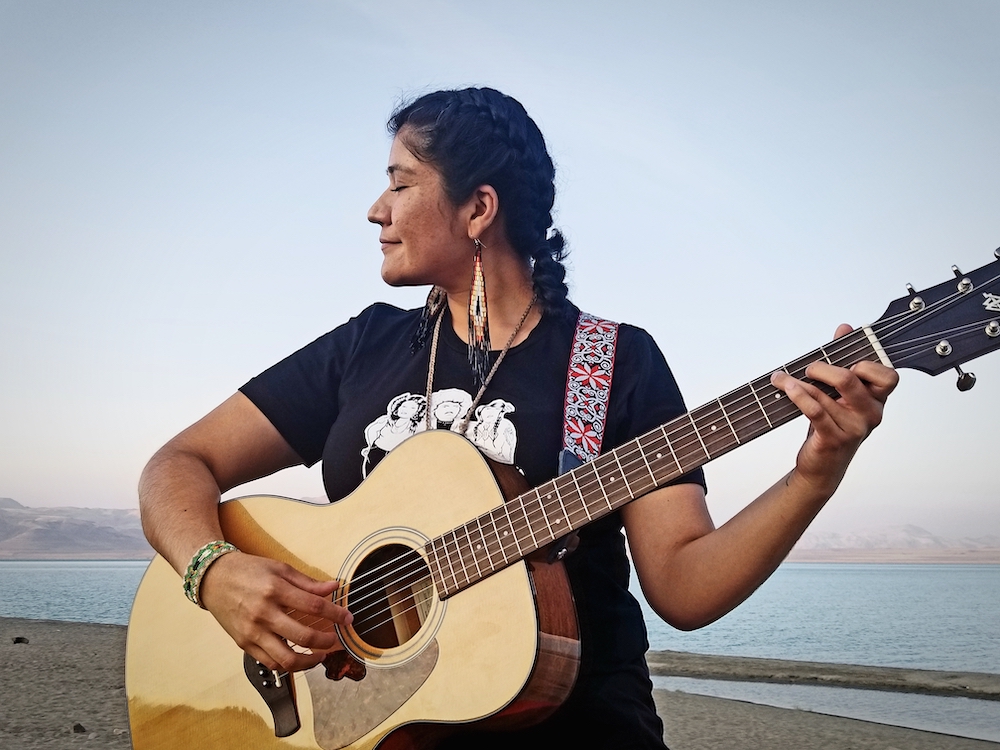 A few weeks later, Winder started to take their proposition seriously and emailed Waln to say so. Waln never responded to her email. Instead, he opted to vocally accept the offer at a Gates Millennium Scholars conference they both attended.

And so, Winder landed her first client — the first of the Dream Warriors. The values of this management company took shape almost immediately. Whenever Winder booked a gig for Waln, he’d tell the organizers to get flights for himself and his manager. When they arrived, he’d request that she open the show with some of her poems. “He would — does — really honor women,” said Winder. “Onstage, he would say things like, ‘I’m using my platform to uplift indigenous women,’ and ‘I wouldn’t be here without her. She does all this stuff.’”

The emphasis on reciprocity — and on using artistic gifts to uplift members of their community — attracted like-minded individuals. While Winder and Waln were planning for an event in Fargo, North Dakota to raise awareness about murdered and missing indigenous women, a local Ojibwe man reached out to her. He asked if he could do their graphic design for the event. He also said he did music, too, and could he open for Frank? “It’s always 50/50 with those kinds of requests,” Winder confided. “I remember thinking, ‘Oh my gosh, what am I going to hear?’ But it was amazing! How had I never heard of this guy? And I like that he had offered to help.”

The man was Mic Jordan, an indigenous hip-hop artist, and he and Winder conversed at length over the phone about promoting that event. Mic Jordan had never met her in person. Nor did he know that she was managing Frank Waln — fearing failure, she’d left that detail unvoiced. Nevertheless, he said to her through the phone, “I’ve been looking for a manager, I’ve been praying about it, and I realized that you’re right here! You should be my manager!” With that, the Dream Warriors grew. 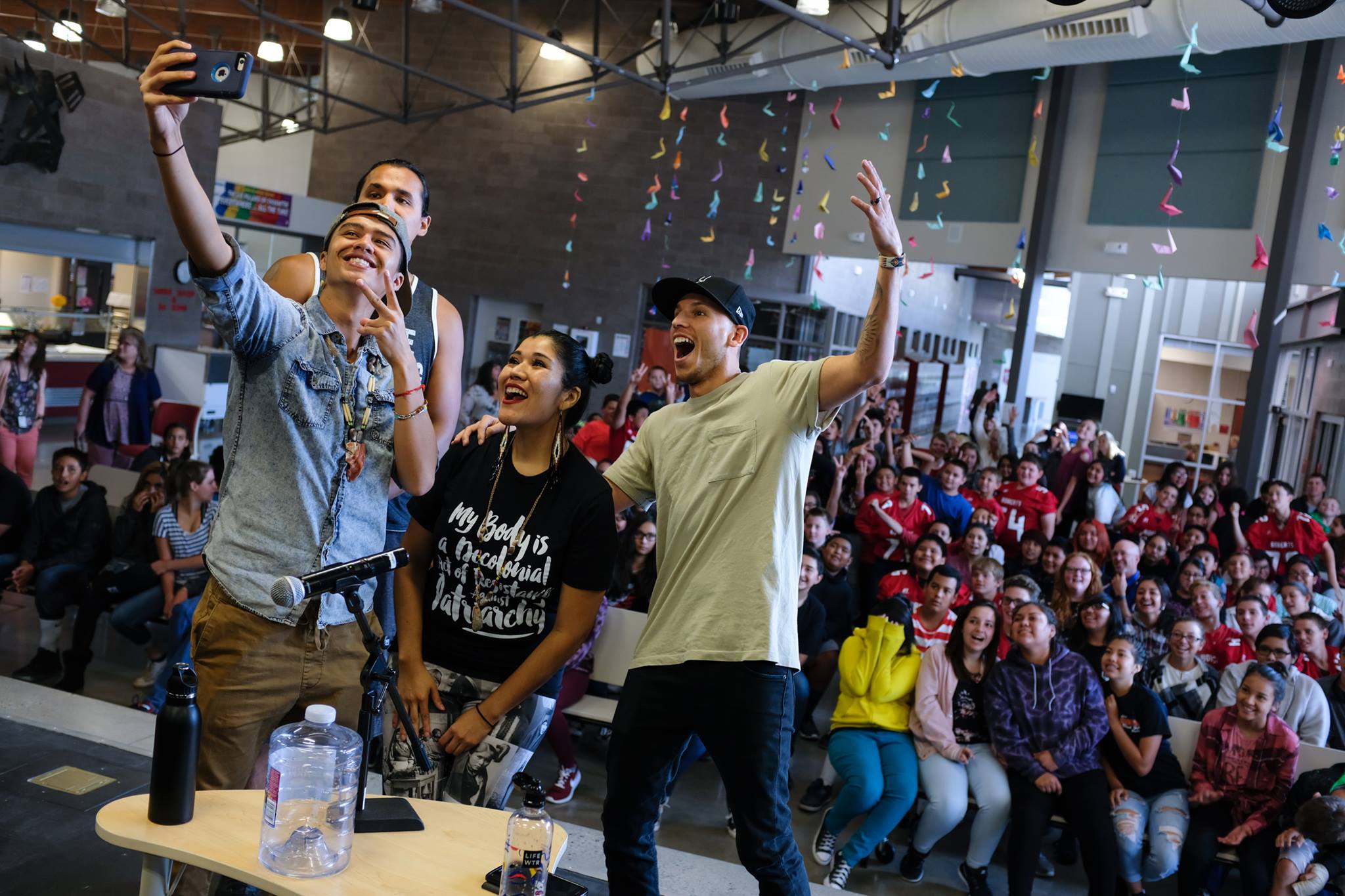 Over the past few years, the Dream Warriors has doubled in size. Various native artists and educators filtered through the collective. Previous Dream Warriors include Denver born-and-raised brothers, John and Kenn Little, who made a documentary on the Redskins NFL team called “More Than a Word.” Sharice Davids — who, alongside Deb Haaland, became the first Native American woman elected to Congress — was also a Dream Warrior for a time. “It’s an entity that people can come to when they need it,” Winder said.

All pursuits are welcome, though the majority of past and present members are musicians. Their duties as musical Dream Warriors include touring across the country to perform concerts and conduct workshops. They’ve played at reservations across the country, at suicide prevention summits, at universities and — this past July — at the John F. Kennedy Center for Performing Arts in Washington D.C. Their motivating belief? “That music allows us to heal ourselves, our past ancestors, and anyone who’s listening,” Winder expressed.

Winder’s brought her Dream Warriors back to the reservation she grew up on several times. The most recent of these trips was for an “Awakening the Warrior Within” workshop to benefit the youth in Ignacio. The city’s KSUT Radio Station — one of the earliest pioneers of Native American radio — funded the event with a $46,000 grant they received from the Colorado Health Foundation.

The Dream Warriors taught the young workshop attendees a variety of music-making skills, including how to make beats on Ableton, how to record in a studio and how to workshop lyrics. By the end of the weekend-long event, the students had made a collective song and accompanying video.

Through these types of events, Winder and her Dream Warriors aim to bring up the next wave of indigenous musicians and empower people of all walks of life to share their voices. Interestingly, one of the collective’s success stories is Winder herself, who found her voice in music alongside the uplifting presence of her colleagues. After years of gradually incorporating singing into her spoken word pieces, she followed her lifelong call to music to its next destination — her first EP, For Women and Girls on Fire.

The Dream Warriors aren’t slowing down anytime soon, and neither is Winder’s momentum with music-making. Her long-term goals include releasing her own full-length album and bringing some of her Upward Bound kids to a recording studio in Boulder to make a collective song. In March 2020, the Dream Warriors will use the second half of the Colorado Health Foundation’s grant to share their gifts with the Mountain Ute Reservation in Towaoc, Colorado. 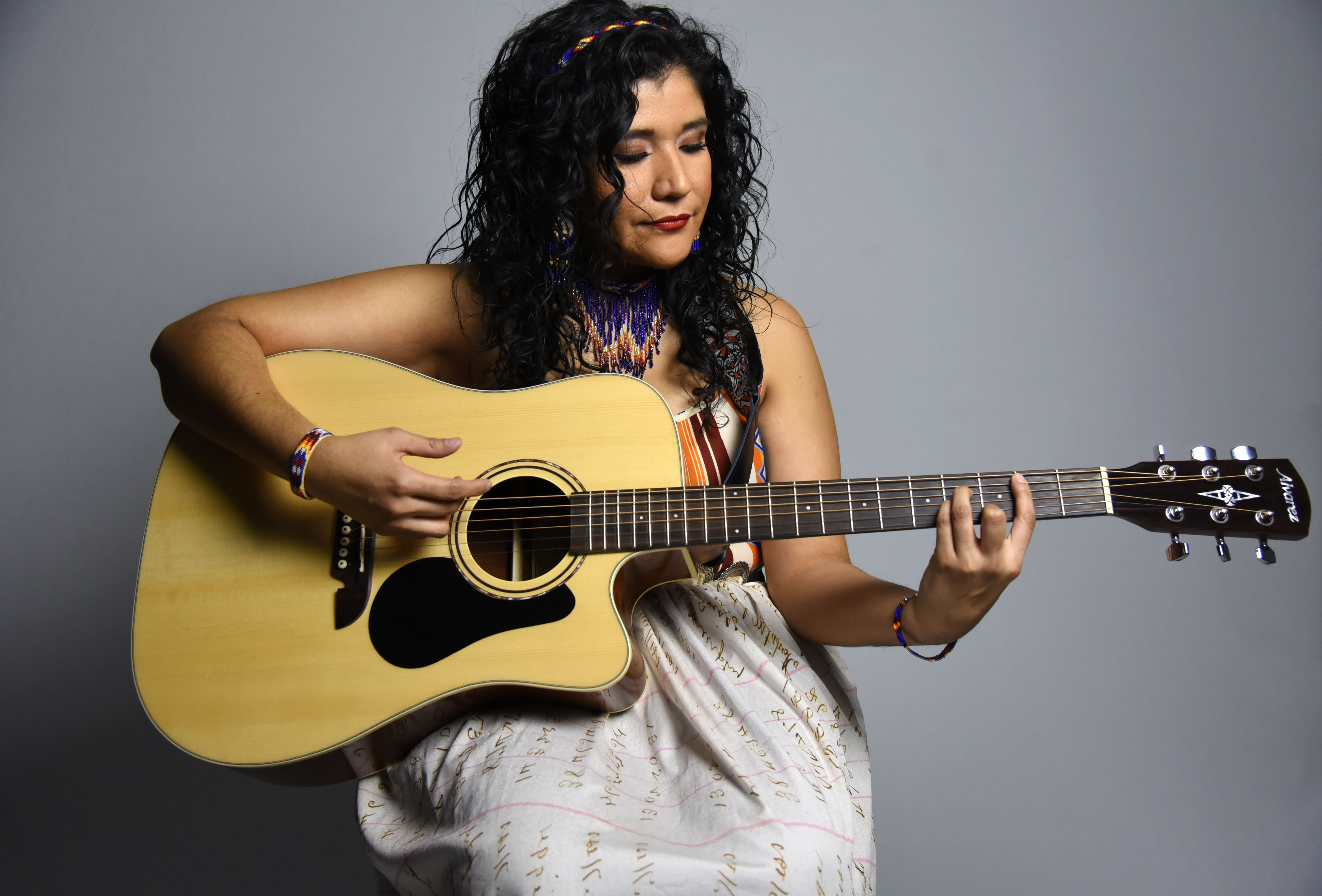 There are many signs throughout Winder’s journey that give the sense that she was destined for the world of music, from Waln’s initial insistence that she’d still be his manager after his breakthrough — a statement that came true — to Mic Jordan’s almost fated conviction that she should be the one to manage him, to the visions she had during her youth of becoming a singer. Maybe it’s a story of her surrendering to the path her Creator set for her, as she likes to allude. Maybe it’s a story about how her quest to help others achieve their unutterable dreams led her back to herself — to the innate abilities her Dream Warriors saw in her since day one. Maybe these two stories are the same.

The Dream Warriors’ message of healing flows in every direction — from the artist to each other, to their audiences, and back again. It is from this sea of empowerment that Winder’s voice rises, and the voices of other indigenous changemakers will surely surface in its wake.

On the final track of Winder’s EP, she intones, “I travel through, and my voice comes back to me in waves. I found words for everything.”

All photos courtesy of Tanaya Winder and the Dream Warriors.