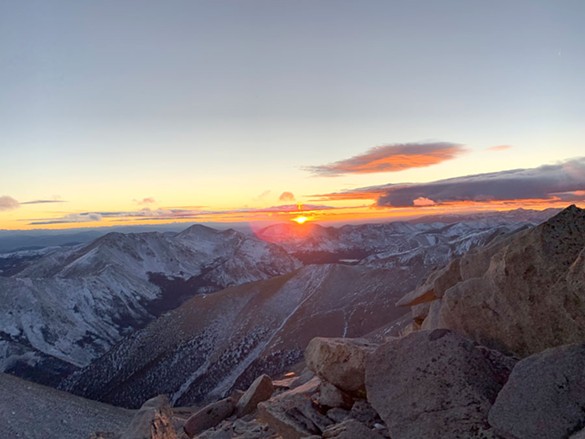 I recently traveled up to UCHealth University of Colorado Hospital in Aurora to sit down and speak with Nick Noland, the 34-year-old career school teacher and father who nearly lost his life (see the Dec. 4 Indy for Nick’s story) — and did lose both of his feet — after becoming lost and stranded overnight, alone on Mount Shavano in Chaffee County.

One of the things that was most striking to me about what happened to Nick was that he was by no means an amateur hiker making his first attempt at a fourteener. He’s been spending copious amounts of time outdoors since he was a young boy in South Carolina; he’s an Eagle Scout; he’s hiked the Appalachian Trail; he knows all about wilderness first-aid; he’s even researched and read books about disasters on fourteeners.

Nick doesn’t just respect Mother Nature, he reveres it. The man who’s trail name (yes, trail names are a thing in the hiking community) is “Smiles” because, “It’s not about the miles, it’s about the smiles,” doesn’t view getting outdoors as an activity. To him, it’s deeply spiritual. He calls it going to “church.”

So how did someone with so much experience and so sturdy a grasp on how to safely summit a mountain end up breaking nearly every rule about mountaineering safety, winding up alone, with no real survival supplies, after dark, in late October, on a mountain 14,231-feet high?

The long answer is that Nick made a series of cascading mistakes — he went alone, he got a late-morning start, he dropped his pack near timberline to more quickly reach the summit (he planned to come back for it, but got lost on the way), he took a shortcut, etc.

But the short answer is that Nick’s past experiences in the mountains made him very comfortable — perhaps too comfortable, in retrospect — with the risks associated with climbing a fourteener.

Nearly everything he did on the mountain that day was something he’d done many times before, and never experienced any negative consequences.

“I think the biggest mistake was having all that experience and all that knowledge — even book knowledge of potential dangers — and then just not having the awareness to see the pieces falling into place that put me on this route,” Nick told me.

“I don’t want to sound like I’m not owning up to my own fault in this is because I know I shouldn’t have been alone. Maybe I should have done more planning. … I shouldn’t have dropped my pack; shouldn’t have taken a shortcut. I shouldn’t have loosened my shoelaces [to improve circulation], I guess. But at the time, I didn’t recognize any of those decisions as being mistakes. And I think that just kind of came from … just that experiential confidence.”

According to search and rescue personnel, Nick is far from the first experienced hiker whose supreme confidence and comfortability put them in a dangerous position.

“It’s the arrogance of experience,” says Pat Caulfield, the vice president of the nonprofit Colorado Search and Rescue Association.

“We see that, where, maybe they were in a similar situation and they made it out, so now they’re not thinking as critically about running into a situation again. But it happens. … So you can’t be arrogant about what you’ve had happen before, thinking, ‘I can get by.’ Because you might not be able to.”

Whether a hiker is going to attempt to summit a fourteener for the first time, or is an experienced peak bagger checking another summit off of their list, Caulfield advises they always begin with the end of their trip at the forefront of their minds.

As world-renowned mountaineer and author Ed Viesturs says, “Getting to the top is optional. Getting down is mandatory.”

Here are some of Caulfield’s tips to safely summit a Colorado’s fourteener:

• Have a way to call for help. Mountains like Shavano have pretty good cell phone coverage. But  some don’t. So have a personal locator beacon or a satellite messaging device — some way to contact help when you need it. And then have some way to tell them where you are. That can be as simple as having a GPS and knowing how to provide your coordinates.

• Carry a backup battery pack for your phone.

• Make sure you have a repair kit. A repair kit can be something as simple as duct tape to fix a  shoelace or the sole of a boot.

• Carry enough nutrition for an emergency. A lot of people carry food they need for the hike, but you need to think about if you’re going to be sitting out there for another 12 hours, waiting for help. People burn more calories when they’re cold.

• Stay the trail. Don’t try and shortcut it.

• Make sure you’re wearing the gear you need. This is not the time of year to be going up and down in running shoes, but rather invest in a good pair of hiking boots.

• If you’re looking for somebody to summit with you, check out some mountaineering social media sites.

As for what to do if a hiker does become lost, Caulfield’s advice is simple: Stay put.

“The biggest thing you can do is don’t make yourself a moving target,” Caulfield says. “Stay where you’re at. Even if you’ve had no communication to tell people you’re in trouble, don’t keep moving. Generally if you keep moving, you’re increasing the area that we need to look in. So hug a tree, stay where you’re at, get up next to a boulder or rock, hunker down, get under your shelter and wait for help.”