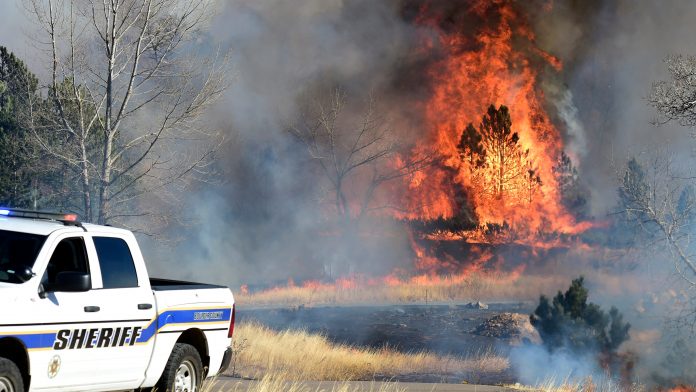 More than 500 homes and several businesses have been destroyed as fires ripped through at least 1,600 acres of mostly-urban areas of Boulder County on Thursday.

Sparked by downed power lines and fueled by hurricane-force winds at times, live footage of the Marshall and Middle Fork fires showed home after home being engulfed in flames as water from firefighters blew back toward emergency crews due to the wind. The fires quickly became the most destructive in Colorado’s history, according to 9News.

“The devastation in Boulder County tonight is utterly heartbreaking. We are in close contact with (Gov. Jared Polis) and working to secure Federal recovery resources,” Rep. Joe Neguse, who represents Fort Collins and Boulder County, tweeted Thursday.  “Please keep everyone in our community in your thoughts, and pray for the firefighters sacrificing so much to keep us safe.”

The high wind warnings were canceled as of about 8 p.m. The National Weather Service in Boulder said there would still be some variable winds and gusts to deal with but the stronger winds should be over. Snow is expected to begin falling Friday morning.

The Boulder County Office of Emergency Management is asking residents to keep the line clear and not call about the status of structures at this time. They are also asking that those wishing to help do not call in. Instead, here’s some ways you can help those impacted by the fires.

How you can help those impacted by the Boulder County fires

Approximately 35,000 residents were evacuated from their homes due to the fires, according to the Community Foundation of Boulder County. As such, the foundation has set up a fund to help those impacted. Those wishing to donate can do so at their website here.

Donations can also be made to the American Red Cross of Colorado here.

If you have been impacted by the fire and need help

The Boulder Office of Emergency Management has advised residents of Louisville to boil water prior to consumption.

Where are the evacuations for the Boulder County fires?

This map shows the latest evacuation and pre-evacuation orders.