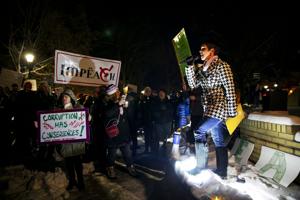 More than 200 people gathered in downtown Colorado Springs on Tuesday evening, the eve of the expected House vote on articles of impeachment against President Donald Trump.

The pro-impeachment activists met in Acacia Park at 5:30 p.m. to start a march through downtown. Chants of “Donald Trump has got to go” and “Lock him up” echoed off the walls of the park bandshell. Some demonstrators held signs that read “Impeach the treasonous mobster” and “Trump is not above the law.”

The rally was one of at least 600 scheduled across the country calling for impeachment of the president. Rallies in all 50 states were planned under the title “Nobody Is Above the Law.”

“We seek to hold him accountable to the constitutional norms that we have as a nation,” Justin Kurth, a rally speaker who described himself to the crowd as a “recovering Republican,” said to The Gazette. “I watched as every opportunity there was to speak against something Trump did just passed by and Republicans continued to abdicate their values to an impeachable president.”

At least eight other demonstrations were scheduled in Colorado, including one at the state Capitol. The movement — sponsored by a coalition of progressive groups including Public Citizen, Indivisible, the Service Employees International Union and the Sierra Club — encouraged rally members to use the hashtag #NotAboveTheLaw on social media.

“And the truth is, I am. But at least enough has gone right to let me know what’s right and wrong … Because I don’t have a voice and you guys do, I want to make sure that everybody’s heard no matter what and that we should definitely, definitely, impeach the president.”

Ashley St. Clair, 21, one of at least three anti-impeachment activists who appeared at the rally, said she particularly disagreed with the crowd’s chants about Trump’s loss of the nationwide popular vote.

“I think it’s crazy …” St. Clair said. “A lot of people think that impeachment means removal from office, but it doesn’t. It’s never going to get past the Senate and if you read the transcript, there was no quid pro quo; there was no bribery. This is the undoing of a national election simply because they don’t like Trump.”

“When you erode the vote, erode elections, you’ve eroded the democratic foundation of our country and it puts it at high risk,” Kurth said.

“We’re supposed to be a shining city on a hill for democracy and if we aren’t maintaining that value, then we’re compromising it not only here but internationally as well.”