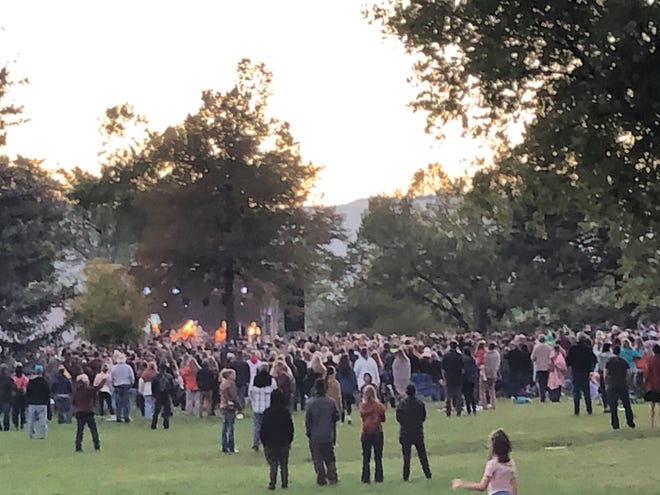 About 2,000 people gathered in Fort Collins’ City Park on Friday night for a touring worship service and protest opposing rules that put limits on church gatherings during COVID-19.

The Fort Collins concert was one in a series of events featuring musician and political activist Sean Feucht, a worship leader at Bethel Church in Redding, Calif. The #LetUsWorship movement protests COVID-19 bans on singing and large group meetings in churches.

A video from Fort Collins’ Friday night event shows a crowd of people gathered in front of a stage in the park, raising their hands, singing and dancing along with the performers, and participating in water baptisms.

Critics of the event who shared photos with the Coloradoan pointed out that attendees were not wearing masks and were standing shoulder to shoulder.

The city denied a permit for the event, but organizers proceeded, citing their First Amendment Rights, Mayor Wade Troxell said in an email response to a complaint letter from a Fort Collins resident, who shared it with the Coloradoan.

The city notified the Larimer County Department of Health and Environment about the event organizers’ plans to proceed, Troxell said in the email.

More than 2,000 people were in attendance, and even though there was a disregard for county and state COVID-19 requirements, along with noise complaints, the event was peaceful, he said.

“The decision was made to take a non-confrontational approach and no efforts were made to disband the gathering,” Troxell wrote. “There have been nine large scale demonstration events in Fort Collins since mid-March. None of these events have led to a tragedy or unruly situations.”

Previous events were held in cities such as Seattle and San Diego, and another was planned in Colorado Springs on Saturday morning.

“Powerful politicians and social media giants have engaged in unchartered abuses of religious liberty, silencing the faithful, banning our voices, and outright attacking our God-given right to declare His goodness,” a statement on Feucht’s website states.

SCHOOLS: Larimer health board won’t weigh in on whether schools should reopen

“States across America, including here in California have shut down church services and even outlawed singing in church. It’s time for the Church to rise up with one voice and tell our government leaders and the rulers of big tech that we refuse to be silenced!”

In Larimer County, public health orders say churches must limit indoor occupancy for worship services to 50% of the posted occupancy code limit without exceeding 175 people. A checklist describes actions to be taken at places of worship.

County rules also say places of worship that would like to host any other gathering larger than 10 people must submit a plan for approval by the health department.

An event supporter posted a public Facebook video prior to the event explaining its purpose.

“We are going to protest some things. Because if it’s a protest, can’t shut it down,” Brian Baldwin says in the video as he shows setup of the event. The video has now been either removed or hidden from public view.

Rebecca Powell is a content strategist at the Coloradoan, working to connect our community with the answers they seek. Contact her at RebeccaPowell@coloradoan.com. We can’t do the important work of keeping our community informed without you. Support the Coloradoan with a digital subscription.