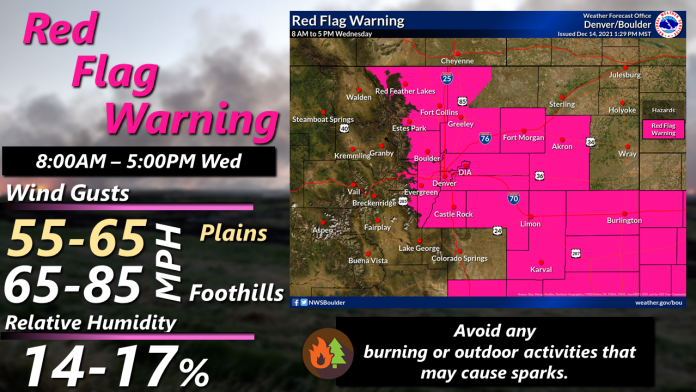 Keep up to date with the latest on weather today and every day with the free Denver7+ app. We also have a live blog running with all the latest developments on today’s storm.

Colorado’s Front Range, foothills, and plains will see hurricane-force winds on Wednesday as a strong storm system moves across the state.

Multiple high wind warnings are now in effect. Red flag warnings were also issued from 8 a.m. through 5 p.m. Wednesday due to the wind, dry conditions and 14-17% relative humidity, according to the National Weather Service (NWS).

The initial blast of strong winds came through the Front Range between 9 a.m. and 11 a.m., the NWS reported, and will last through 4 p.m.

Here is a breakdown of the multiple weather-related alerts across the state.

High wind warnings across much of eastern half of Colorado

Several counties are under a warning for high wind through 5 p.m. Wednesday:

A few wind reports from the first blast associated with the cold front/showers that moved across the I-25 Corridor – now moving east across the plains.

Wind in these areas will blow 30 to 50 mph with gusts between 60 and 80 mph. Wind-prone places in and near the foothills may see gusts as strong as 100 mph, the NWS reports. Hurricane-force winds are defined as gusts above 74 mph and tropical storm-force winds range from 39 mph to 73 mph, according to the National Hurricane Center.

This wind will be strong enough to blow down trees and power lines, which may cause widespread power outages. NWS recommends securing any loose outdoor objects.

Xcel Energy said it will stage crews in the area to quickly restore power if gusts take out lines. If it leads to power outages, customers can report them in the following ways:

The strong winds will also become a problem on the roads, where high-profile vehicles may get blown around. Avoid travel if you can.

Blowing dust will reduce visibility to less than a quarter of a mile in some places, NWS said.

Mountains in southern Colorado may see gusts up to 95 mph

In Fremont, Teller and El Paso counties, west winds will blow 40 to 60 mph with gusts up to 80 mph, the NWS said. The high wind warning is in effect in these counties from 8 a.m. to 5 p.m. on Wednesday. Drivers should expect strong cross winds on Interstate 25.

The San Luis Valley is under a high wind warning until noon Wednesday for southwest winds blowing 35 to 45 mph with gusts up to 70 mph, the NWS said.

These dry and windy conditions across the entire eastern half of the state will create critical fire weather on the plains.

These dry, windy conditions have resulted in air quality health advisories due to the blowing dust until 8 p.m. Wednesday. This is in effect for the counties along the Front Range and the eastern plains. A dust storm warning is in effect until 10:30 a.m. for US 350, US 50 near La Junta, US 50 near Las Animas and US 50 near Rocky Ford.

Individuals with respiratory problems should stay inside until the storm passes, the NWS said Wednesday morning. The blowing dust will likely affect people who have heart or lung disease or cardiopulmonary disease.

People with these types of diseases, older adults, and children are encouraged to reduce their activities outside on Wednesday.

These advisories are in effect for the following areas:

Winter weather advisories in place for mountains, I-70 closures expected on and off

Currently, westbound lanes of I-70 are closed from milemarker 195 to 180, and from Silverthorne to milemarker 205.

If you get caught in a squall, NWS recommends pulling off to the side of the road and waiting for it to pass.

Caught in snow squall on I-70

In addition to the wind warnings, the National Weather Service has also issued a winter weather advisory for part of Colorado’s mountains and western slope.

Rabbit Ears Pass, Rocky Mountain National Park, the Medicine Bow Range, mountains in Summit County, Mosquito Range, and Indian Peaks are all under a winter weather advisory until 8 p.m. Wednesday due to snow — heavy at times, such as two inches per hour — that will start this morning. Total accumulation is expected to stay between 3 and 7 inches. This snow will come in with gusts as strong as 75 mph, which will result in blowing snow and poor visibility, the NWS said. Roads will likely stay slick during this storm, so be sure to drive carefully.

The western Mosquito Range, Sawatch Range, and Sangre de Cristo Range will also stay under a winter weather advisory until 5 p.m. for up to 5 inches of new snow and gusts up to 95 mph. The wind chill may drop to temperatures as low as -30 degrees, meaning frostbite could occur on bare skin in 30 minutes, the NWS warns.

Winds will stay a tiny bit weaker in the La Garita Mountains, the Upper Rio Grande Valley and Eastern San Juan Mountains, but that area is also under the advisory until 5 p.m. due to 1-3 inches of new snow and gusts up to 80 mph.