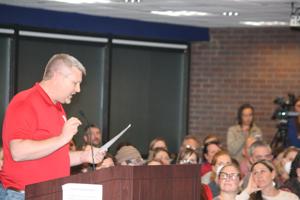 Academy School District 20 was forced to cancel its high school classes on Friday when teachers organized a “sickout” in protest of a forthcoming scheduling policy they say will add to their workload without increasing their pay, dramatically lower teacher morale and ultimately lead to resignations.

“With such significant absence rates, we are unable to properly fill enough positions with guest staff to safely operate our high schools,” district spokeswoman Allison Cortez said in a written statement announcing the closures.

At issue is a scheduling change commonly known as “six of eight.” The new schedule, set to be implemented in the fall, would increase the full teaching load for high school teachers to 12 course sections per year, as opposed to the 11 they currently teach, essentially taking away a planning period.

The Academy Education Association, the teachers’ union that organized the sickout, said in a statement the scheduling change underscores the district’s history of undervaluing its teachers.

“Our educators continually answer the call for our students and the district continues to show that they don’t value us,” the statement read, in part. “We need time to plan. We need time to ensure that each and every student has the time and the resources they need to succeed.”

Amy Ver Duft, a high school math teacher and Academy Education Association member, said she intends to retire earlier than intended because of the scheduling change.

“I just can’t do the six of eight,” said Ver Duft, who has been teaching nearly 34 years. “I’ve done it three other times in other states, and it just kills you. I didn’t have time for myself or my family. It’s just too difficult, and I won’t do it again.”

During Thursday night’s school board meeting, about 20 teachers echoed Ver Duft’s sentiments, warning that an increase in workload without a commensurate pay raise will cause some teachers to move to other districts or quit teaching entirely.

Rachel Sinclair, a D-20 teacher and Rampart High School graduate, fought back tears as she addressed the board. After stating her reasons for becoming a teacher and speaking of her passion for her students, Sinclair read aloud her letter of resignation.

“As the district moves to take planning time away from teachers and increase workload while keeping salaries the same, I’m faced with the reality that I cannot afford to continue doing what I love,” Sinclair read from her letter. “As a direct result of the district’s decision, I will be pursuing alternate careers.”

“We’re hoping that the district either decides not to do the six of eight schedule, or pays us to do it,” Ver Duft said. “Teachers are working too hard for too little, and if they keep overworking us, more teachers will quit.”