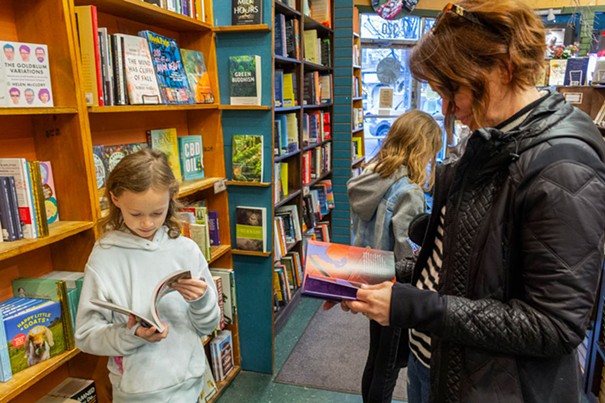 Covered Treasures owner Tommie Plank pauses her conversation during a lull on a January afternoon to ring up a customer at the Monument bookstore.

The two women make idle chat during the transaction, and the conversation ends on a familiar note for Plank: “It’s my dream someday to own a bookstore like this,” the customer tells her on her way out the door.

“I get that almost every week,” Plank says. “People love just being in a bookstore and being around people who like to talk about books.”

In today’s delivery economy, an Amazon package can travel from warehouse to doorstep within a matter of hours. Independent bookstores are a refuge for technology holdouts. By the end of 2019, Covered Treasures’ sales had risen nearly 8 percent from the previous year, Plank says.

“I think it says something about a community in people’s minds [if] the community as a whole can support an independent bookstore,” she says.

“Certainly the notion that everybody was going to be reading off computers, I think, was the same issue around streaming and movie theaters,” says Richard Skorman, who owns Poor Richard’s Books & Gifts on North Tejon Street with his wife, Patricia Seator. “People still like to go to movies. They like the experience of being in a crowd laughing, and I think it’s similar with bookstores. There’s just a lot of people that like the experience of being in a place with other people who have the same interests.”

The uptick in independent booksellers doesn’t always translate to profit, however. Jim Ciletti, who owns Hooked on Books with his wife, Mary, in downtown Colorado Springs, says he has seen a decline in both online and in-store sales over the past four years.

The decline of electronic readers is a possible contributor to the surge in smaller booksellers. Once heralded as the death knell for traditional books, devices such as Kindle and Nook are suffering from a rapid drop in sales, according to a November 2019 post on the blog Just Publishing Advice.

As the novelty of e-readers waned, Skorman noticed more of what he calls “recreational book shoppers” — customers who not only enjoy reading, but the physical experience of being in a bookstore.

“There’s a fatigue from people who spend so much time in front of computer screens. They want to have a real book in their hands and be able to turn the pages,” Skorman says. “I think there’s a certain part of the population that just doesn’t want to have the computer screens be their delivery method for reading all the time.”

The convenience of taking an e-reader on vacation, as opposed to hauling a stack of books, is hard to beat, Plank says. Still, regular readers seem to prefer the tactile experience of a paperback to a Nook or Kindle, she says.

“I think people are realizing that sometimes the satisfaction of reading a book is different when you read it on a screen. The way our minds store that information is very different,” Plank says. “The recall of material that you read on a printed page is stored in a different place in our brain than that information that we read on the screen. Your mind remembers how far in the book it was, or if it was on the left or right-hand page. On an electronic reader, you have no reference like that.”

Many independent booksellers have long since turned to online sales in order to thrive in an increasingly virtual economy. However, the successful business owners take it a step further — they become community gathering spaces, Ciletti says.

“Our bookstore is about more than simply selling books. We’re a cultural resource for the community,” Ciletti says. “Bookstores around the country that want to stay in business need to look at that business model.”

Hooked on Books regularly hosts author signings, writing workshops and poetry readings at its two locations. In doing so, the Cilettis have cultivated a loyal customer base during Hooked on Books’ nearly four decades in business.

“We have people that come in and just want to sit in a chair and read a poetry book. It’s a comfort zone,” Ciletti says. “Where else in this town, on Tejon Street, can you go in and sit for half an hour and not buy anything and be able to enjoy resting?

“Bookstores — whether it be Poor Richard’s or our store — we’re comfort zones in the middle of commerce.”