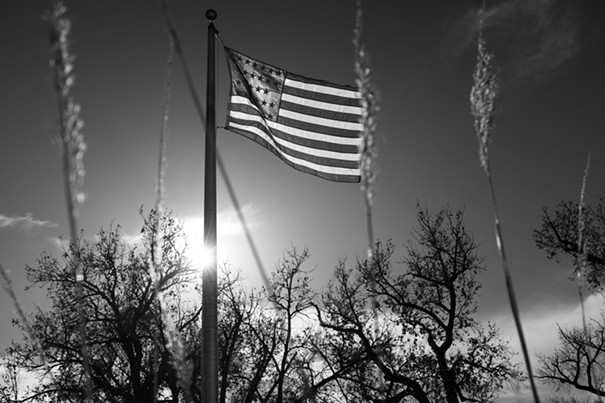 A photographer must feel something in order to make compelling pictures. That can be really difficult sometimes when dealing with hard realities and subject matter.

This week, I decided to take my children to visit the Sand Creek Massacre National Historic Site. The site is far out on the eastern plains of Colorado near the town of Eads. It’s roughly a 2 and 1/2 hour drive from Colorado Springs.

Briefly, on the morning of November 29, 1864 a group of Arapaho and Cheyenne encamped here were slaughtered by Union soldiers under the command of U.S. Army Colonel John Chivington.

The story is ghastly. The soldiers indiscriminately murdered around 200 people, most of them defenseless women and children, and then mutilated them. The scene as described by Captatin Silas Soule and others is unbelievably horrific.

Soule and Lieutenant Joseph Cramer refused to obey Chivington’s orders to shoot and told their men to hold fire. Soule was later assassinated in Denver after testifying about the incident to a congressional committee investigating the crime.

I don’t want to dwell here too much on the details but suffice to say it was one of the most heinous acts U.S. soldiers ever committed against Native Americans. Read more about the massacre at the National Park Service web page here.

When we arrived at the site we were given a brief, albeit carefully-worded, description of the battle by National Park Service Ranger Teri Jobe. Afterwards we went on a hike to a nearby bluff where you can view the site. The site itself is considered sacred by descendants and is off limits to visitors.

To be honest there isn’t a lot to see except for the natural beauty of the area. I love the open plains, it calls to me, and the cottonwoods nestled along the bank of the Sandy Creek are gorgeous.

To take pictures and try to translate what happened here is difficult. And the difficulty doesn’t just lie in taking the photos, but also in reliving (as much as one can) what happened at this place 155 years ago.

It was a traumatic experience. And it’s not unique to me. Documentary photojournalists and war photographers alike often have to interpret the grief, anguish and pain of an event like this no matter what there is to see.

As I went about my work, I let my children wander on their own. I was sensitive to the fact that I and Ranger Jobe were both quite incapable to find words to explain it to them. My children knew what happened and I let them dwell in their own thoughts on the subject.

When I was done, I felt a sense of quiet respect. Our visit taught us that the American story is hard to look at sometimes. By visiting this site, learning about what happened and taking time to reflect, the people who needlessly perished here are both recognized and honored.

Sean Cayton is a wedding photojournalist of 19 years and operates a successful, award-winning wedding photography studio in Colorado Springs. He’s also an award-winning photojournalist. Sean is happily married to the love of his life (also his business partner) and is father to three beautiful children. When he’s not working, Sean can be found outside flying kites with his kids, hitting golf balls or casting a fly rod to hungry trout.