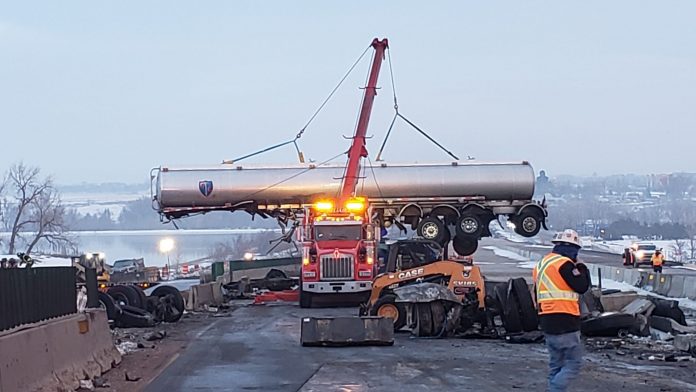 More than 36 hours after a crash ripped opened a semi-tanker on Interstate 25 near Loveland, spilling 11,500 gallons of diesel fuel, the busy interstate opened Sunday afternoon.

Southbound lanes of I-25 between Colorado Highway 402 and U.S. Highway 34 opened around 1:30 p.m. Sunday, with northbound lanes opening about 90 minutes later.

The crash occurred just after 1 a.m. Saturday, when a fully loaded tanker crashed into the concrete barriers in a construction zone of the North I-25 Express Lanes Project. The spill site is about a half mile north of the Big Thompson River.

Paul Peronard, the Environmental Protection Agency’s on-scene coordinator, said Sunday afternoon that the bulk of the fuel was sucked up Saturday night or diverted and should not have an impact on the river or nearby irrigation canals.

However, he said the spill site will continued to be monitored.

“What we are doing now is setting up residual protection because the fuel soaked through the asphalt and into the ground,” Peronard said. “It will keep bleeding out for a couple months or more. What we are focusing on now is policing where it will drain and get it into control ditches so we can keep policing the water and removing it before it reaches the river.”

Jarod Fiel, CDOT’s communication manager for the region, said the tanker destroyed several concrete barriers. He said the large amount of fuel damaged the interstate by permeating the pavement and eroding some of the highway’s subsurface.

Crews had to scrape the pavement and assess the subsurface, then repave the road, mostly on the northbound section most impacted by the spill.

More:See the building of the new Poudre River bridge at I-25

Fiel said the closure was one of the longest in recent memory. He said for comparison, I-25 was closed for about 10 hours during the 2013 flood.

Colorado State Patrol said Sunday morning the tanker driver was transported to Medical Center of the Rockies in Loveland after receiving “serious bodily injury” that did not appear to be life threatening. The cause of the crash remains under investigation.