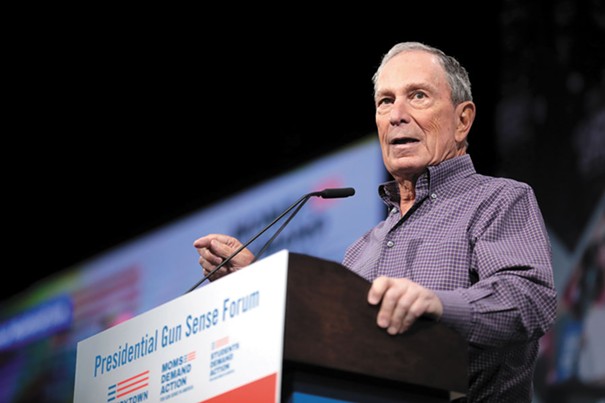 It was a long while coming, but I believe we have now officially moved into the early-panic stage of the Democratic presidential primary. This won’t be the last one. Democrats routinely panic during election time, and also during non-election time, but in the run-up to 2020 — with, yes, the future of American democracy on the line — the panic attacks will likely reach Tony Soprano levels.
As of now, they’ve reached Michael Bloomberg levels, in which the multi-multi-billionaire and former New York City mayor is prepared, once again, to rescue the Democratic field and, thereby, the nation. Unless he decides, once again, not to run as he did — checking calendar — just last March.

It seems that with Joe Biden fading among Democrats — although still leading in nearly all the national polls — and Elizabeth Warren gaining among Democrats — despite battleground-state polling showing her struggling against Donald Trump — Bloomberg has decided someone is needed to change the dynamic. And that someone, in Bloomberg’s view, is Bloomberg along with, of course, his $52 billion.

All right, that’s still pretty low-level panic. I don’t know anyone who thinks Bloomberg would do anything much in the Democratic race except get in the way. You can argue, as I would, that if Bloomberg is panicked about Warren, he gives her the opportunity for a pre-Trump showdown with a billionaire who won’t call her Pocahontas. He already has compared her wealth tax to chaos in Venezuela. And you can argue, as I would, that if Bloomberg wants a moderate to win and is worried that Biden is having trouble raising money, that Bloomberg would just get in the way of Pete Buttigieg, a moderately liberal Democrat who is on the rise, not to mention other moderates like Kamala Harris, Amy Klobuchar and even Colorado’s own Michael Bennet.

And I would definitely argue the last thing Democrats are looking for in 2020 is a stop-and-frisk defender and #MeToo-challenged self-funder who pledges to spend $100 million of his own money on his campaign and who plans, his supporters are saying, to skip the early states and wait until Super Tuesday to join the fray. Who wants to bet that Bloomberg has, uh, reconsidered his presidential considerations by then?

Let’s face it, whether or not you think Bloomberg is what Democrats — now reduced to a mere 17 candidates — need at this point, the strange thing about this particular panic is that it comes just as Donald Trump is having the worst run of his presidency, far worse than the Mueller probing, the Comey firing or the Putin poodling.

You may recall that Trump is facing an impeachment inquiry and the likelihood — OK, near certainty — of the House voting to impeach him. No, he won’t be removed, thanks to Cory Gardner and the rest of his weak-kneed pals in the GOP Senate caucus, but he’ll almost certainly be weakened.

As the impeachment inquiry picks up speed, we’ve seen Trump become increasingly unhinged. I particularly like his comedy bit about impeachment being unconstitutional. On Friday, even funnier, he defended himself by saying he alone had “caught the swamp.” Maybe he meant he had caught swamp fever, which would be understandable. Each day House Democrats are releasing the transcripts of the depositions they’ve conducted on Trump and Ukraine and those three magic words — quid, pro and quo — and each day the messaging becomes more deadly.

The transcripts show that Trump was holding back desperately needed military aid from Ukraine unless President Zelensky publicly announced he was going to investigate the Bidens and the debunked conspiracy theory that Ukraine, and not Russia, had hacked the Democrats in 2016. You can call it bribery or extortion or abuse of power or a high crime or a misdemeanor. This is how Lt. Colonel Alexander Vindman put it in testimony released Friday:

According to The Washington Post’s reading of the transcript, Vindman was asked if he had any doubt that Trump, in his infamous July 25 phone call, was asking to investigate the Bidens “as a deliverable” — meaning, as part of a quid pro quo.

“There was no doubt,” Vindman said.

And beginning next week, Vindman and the rest will give their testimony publicly. Yes, the erstwhile Trump supporters as well as lifelong diplomats will line up to testify about how Trump gave over the running of diplomacy in Ukraine to Trump’s TV lawyer, Rudy Giuliani, and, it seems, Rudy’s henchmen to put the pressure on Zelensky. It’s all farce, or would be if it weren’t so critical. The Wall Street Journal is reporting that Giuliani’s henchmen were making the same ask of the previous Ukraine president.

Republicans are at a loss as to what to do to defend the indefensible Trump. They no longer have the holding-hearings-in-secrecy complaint to make. They don’t have the lack-of-transcripts complaint to make. The smears that some Republicans have tried to make, accusing diplomats of being deep-staters or double agents or whatever else comes to mind, won’t survive the public hearings. And how do they defend, in a Senate trial, the fact that Trump won’t allow his senior officials to give testimony?

Well, there is the most recent tactic, which is to say that the Trump team is too inept to have pulled off any kind of deal with Ukraine. As Trump’s buddy Lindsey Graham put it, “What I can tell you about the Trump policy toward the Ukraine, it was incoherent … They seem to be incapable of forming a quid pro quo.”

I don’t know who should be more panicked by the fact that Graham’s description of events — that Trump and his Ukraine team are basically a bunch of clowns — is the easiest one to believe.

This article first appeared in The Colorado Independent.