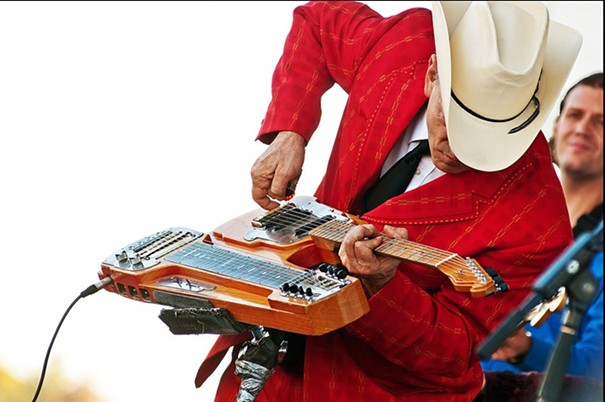 Two months ago, Rolling Stone ranked Junior Brown’s debut album 12 Shades of Brown among its “50 Country Albums Every Rock Fan Should Own.” In the age of Americana, Brown’s mix of revisionist swing, honky tonk and rockabilly seems to make perfect sense.

But that wasn’t always the case. When his Junior High album earned a 1995 Grammy nomination for Best Country Album, the Nashville music industry was not at all pleased. Brown was, after all, a complete outlier. For one thing, Brown lived in Austin, where he’d been part of the local music scene for going on two decades. And like the ghost of country music’s past, he also reminded Music City USA’s deal-makers of a history they’d altogether abandoned, apart from the obligatory Stetson hats and Southern drawls.

No less unusual was Brown’s custom-made “guit-steel,” a double-neck electric guitar/lap steel hybrid that he still plays the hell out of onstage. Junior Brown didn’t win a Grammy Award that year — nor the next, when his “My Wife Thinks You’re Dead” was nominated in both the Best Country Song and Best Male Country Vocal Performance categories. But given the enthusiasm he conveys for the music he so obviously loves, one suspects he couldn’t care less.