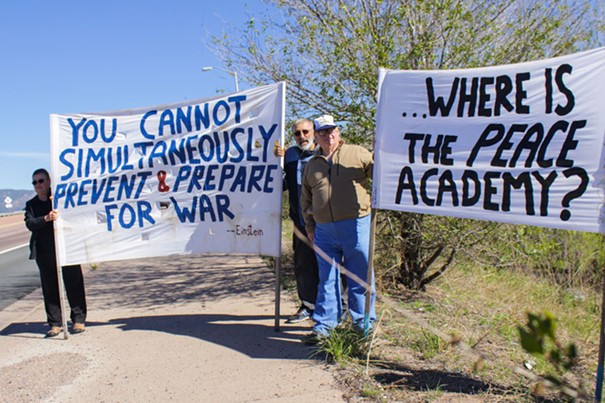 When tough discussions are needed along the Front Range regarding the protection of human rights, the elimination of oppressive government policies, nonviolent options for conflict resolution or environmental sustainability, there’s a good chance the Pikes Peak Justice & Peace Commission (PPJPC) will be there.

Since its founding in February 1978, the nonprofit has been at the vanguard of debate and action on issues involving social justice and the environment. This year alone, PPJPC called for enhanced sensitivity and community training for the city’s police force following an August officer-involved shooting, asked for a broad-scope investigation into what it called “the local white supremacy movement,” and demonstrated outside the Air Force Academy on May 30, as President Donald Trump delivered the Academy’s commencement address.

One of these expansions: Executive Director Victoria Stone floated an idea to interrupt the local cradle-to-prison pipeline by strengthening support for at-risk youths. Her vision, Wirbel says, was to support those who slip through the academic cracks, those who have been expelled or dropped out of school.

That idea led to creation of a pilot program, now about a year old, that offers mentorship and tutoring for young people up to age 21. Wirbel is quick to add that the program, dubbed the LEAD Excellence Academy, does not follow a traditional scholastic model, but rather is guidance-oriented. The curriculum does help young people with core academics — mathematics, social studies and English — but adds practical knowledge, such as how to balance a budget and critical social skills needed to navigate a post-academic world.

The academy utilizes volunteer teachers as well as non-certified volunteers, says Wirbel. And since it is not an accredited school, the academy can’t offer a GED, but the goal is to track students back into the classroom or GED programs.

While the majority of students have come from Colorado Springs School District 11 and the Southeast’s Harrison School District 2, Wirbel says the Commission works with any young person in need, regardless of their home turf.

“We found in talking with other nonprofits around town that nobody was looking specifically at that” teen demographic, Wirbel says. “There are charter schools and others that deal with those who are able to be enrolled [in] alternative programs, but there was nothing for the kids who couldn’t [enroll].”

“A lot of the school districts were glad to see us stepping up to care for those students.”

LEAD Excellence Academy has already seen some successes, Wirbel says, as well as some challenges. One of the main difficulties, he says, has been explaining how it fits the Commission’s social justice vision. At its heart, Wirbel says, the mentorship program fulfills that vision by empowering the youths most desperately in need, to keep them away from gangs, violence and lives of crime.

Wirbel could not share success stories (to avoid compromising participants’ privacy), but the pride was evident in his voice.

“You’re always going to have some who still don’t make it and others whose lightbulb goes on,” Wirbel says. “The longer the program could stay open, the more stories we could have.”