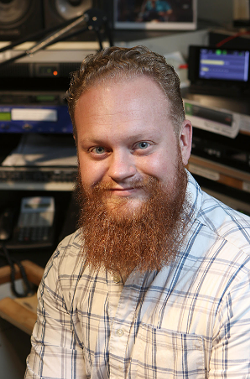 KRCC’s general manager Kyle Cunningham has announced he’ll leave March 6, just weeks after it was publicly disclosed that Colorado Public Radio and KRCC licensee Colorado College agreed to shift management of the FM station to CPR. Talks have been taking place for at least a year.

Here’s his letter to donors:

I write to you today to announce that I will be leaving my position as General Manager at 91.5 KRCC. My final day at the station will be on March 6th, 2020.

It has been the honor of my life to serve for the past four years in my two roles at KRCC. As Membership Manager, I had the privilege to interact with supporters and listeners in our Southern Colorado community on a daily basis. I was continually blown away at the generosity and the kindness of our community members. Without fail, I found our listeners to be humble, engaged, caring, curious, and brilliant.

I am happy to answer questions and concerns in the coming weeks. Please feel free to reach out.

Finally, I would like to direct your attention to the KRCC Community Advisory Board meeting this week, which will occur on Thursday, Feb. 13th at 2:00 p.m. The meeting will be held in Room 201 at Tutt Library, 1021 North Cascade Ave. Colorado Springs, CO 80903. This meeting is open to the public. More information here.

Thank you so much for your support.

You can read KRCC’s story about his resignation here.

Cunningham says his departure is voluntary, and, as he is quoted saying in the KRCC story, is “seeking to find some balance in my personal and professional life, and to explore new possibilities and opportunities.”

He tells the Indy he plans to stay around Colorado Springs and is “ready for a change.”

Cunningham describes the new direction CPR will take as a much larger news focus.

“Colorado Public Radio has made no secret of the fact they desire to be a statewide network,” he says. “They wanna replace things like the Denver Post as being the news source for all Coloradans.”

He predicted CPR will make programming changes but wants to keep KRCC’s focus local, including retaining some local hosts. “But there’s a lot left to be worked out,” he says.

The KRCC team is now reporting within the CPR editorial structure and how that content will be shared here and elsewhere hasn’t been finalized, he says.

The transition began Feb. 1 and will continue for a year. Cunningham says he expects CPR to wait until after the transition is complete to hire his replacement.