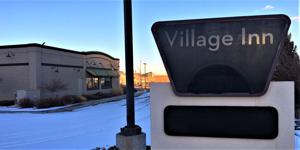 Krispy Kreme Doughnuts has firmed up plans to return to Colorado Springs after a more than 15-year absence.

The Village Inn, which sits on 1.2 acres, will be razed and a 3,547-square-foot Krispy Kreme constructed in its place, according to a proposal submitted in February to Colorado Springs city planners.

The new Krispy Kreme would have a dual-lane drive-thru, an unknown number of seats and three dozen parking spaces; construction would begin in August and finish in December, the proposal filed with the city shows.

Neither WKS Restaurant Group officials nor representatives of North Carolina-based Krispy Kreme could be reached for comment.

The new Krispy Kreme would be built near a Cavender’s Western Outfitter store and a Jose Muldoon’s restaurant, northwest of South Carefree and Powers Boulevard.

The location near Powers likely was a draw for WKS and Krispy Kreme. Over the last 30 years, Powers has become one of the city’s top retail corridors and is home to restaurants, stores, big-box stores, groceries, movie theaters and hotels. Thousands of homes and apartments in several residential neighborhoods line Powers’ east and west sides.

Mike Berger, a broker with Weichert Realtors Pikes Peak Group who marketed the Village Inn property on behalf of Col-Terra Investments, said the site along Powers has good visibility and should attract plenty of customers.

“Krispy Kreme has a national presence,” Berger said. “It’s an automatic draw. … Their success, I would say, is akin to In-N-Out Burger. They have a following and they’re in a perfect location for that. A super high-traffic area. It’s one of the highest traffic intersections in the city. They’ve bought a primo location.”

Krispy Kreme had a relatively short stay once before in Colorado Springs.

A franchised Krispy Kreme location opened in May 2002 in a free-standing building that was constructed northeast of Platte Avenue and Chelton Road at The Citadel mall.

That location, however, closed less than four years later in January 2006; a handful of other Krispy Kreme stores in Colorado also closed at that time.