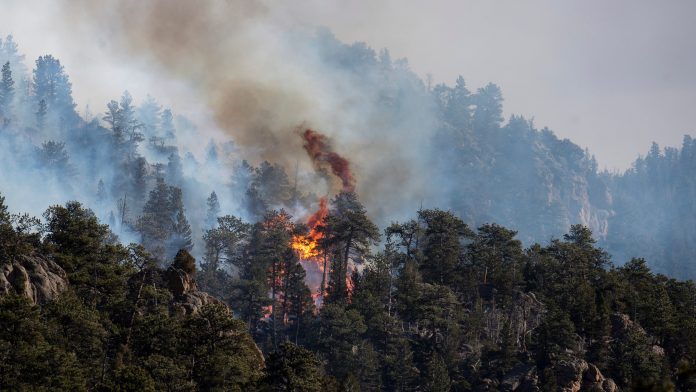 Colorado’s first foray into the emerging technology of using fixed-wing aircraft to fight wildfires at night ended in tragedy Tuesday when a specially equipped plane crashed in rugged terrain near Estes Park, killing its pilot.

CO Fire Aviation identified its pilot killed in the crash as Marc Thor Olson. In a post on Facebook, the company said Olson was a highly decorated veteran of the Army and Air Force with 32 years of service and that he had amassed more than 8,000 total flight hours with 1,000 hours of night vision goggle flying, including in combat and in his civilian life.

“Our family is deeply saddened by the sudden, tragic loss of one of our brothers,” the post stated. “We ask that family and friends be given distance and time to process and heal as we grieve this loss.”

In the post, the company said it is fully cooperating with the proper authorities and partners during the investigation and that it is “gravely aware of the inherent dangers of aerial fire fighting and the questions that remain.”

Olson was the pilot and sole occupant of the Air Tractor AT-802 in the crash, according to a previous release by the Larimer County Sheriff’s Office.

The Fort Morgan-based operation is among a handful of pioneering companies using new technology to fight wildfires at night. It demonstrated the plane’s capabilities during a demonstration in May at the Northern Colorado Regional Airport, from which Tuesday’s flight took off.

The cause of the crash is being investigated by National Transportation Safety Board and Federal Aviation Administration.

Ben Miller, director of Grand Junction-based Colorado Center of Excellence for Advanced Technology Aerial Firefighting, said the crash was heartbreaking and that the aviation community lost a friend.

“There are some new things we try for all the right reasons and after all the correct processes and yet it turns out with the worst scenario,” Miller said. “We should look at the pilot as a hero for his willingness to advance technology and honor the sacrifice he made.”

Here is how the crash unfolded and a look at the new technology’s pros and cons.

More:What we know about the Kruger Rock Fire near Estes Park

The fire started about 7 a.m. Tuesday due to strong wind downing power lines. By noon Tuesday, the northwest wind was variable at 5 to 13 mph and gusting to 25 to 34 mph, according to the National Weather Service in Boulder. Wind was gusting to an estimated 45 mph along the ridges near Kruger Rock, where the fire started.

The wind prevented the use of aerial support to fight the fire during the day, and steep, wooded terrain and swirling winds prevented firefighters from battling the blaze from the ground.

Fortunately, the northwest wind was blowing the fire away from the southeast edge of Estes Park and didn’t imminently threaten structures. But the fire prompted the sheriff’s office to issue mandatory evacuations of nearby residents and businesses, and Estes Park High School was closed.

By late afternoon, the wind helped the fire crest the ridgeline and push it east onto Roosevelt National Forest ground toward U.S. Highway 36, where some businesses and residential subdivisions were evacuated.

Fire command told the Coloradoan the forecast was for the wind to subside by late Tuesday afternoon, which might allow for aerial support.

The weather service had issued a red flag warning for much of the Front Range until 5 p.m. Tuesday. The warning area was near but did not include Larimer County.

Larimer County was in command of the fire and requested the use of the Air Tractor AT-802 owned by CoFire Aviation, with which the county has a verbal “call when needed” contract for its services, a sheriff’s office spokesperson confirmed.

FlightAware shows the plane left Fort Morgan Municipal Airport at 3:30 p.m. Tuesday. It dropped a load of water on the fire, according to the Larimer County Sheriff’s Office, arriving at the Loveland airport at 4:38 p.m. It then left for its second fire mission at 6:13 p.m. and contact was lost at 6:36 p.m.

Flightradar24 shows the plane left the airport and circled in the fire area several times before it crashed.

The National Weather Service in Boulder said its data indicated wind in the area at the time of the crash to be from the northwest at 17 mph, gusting to 34 mph.

The sheriff’s office said the wreckage was located at 9:49 p.m. in the vicinity of the south end of Hermit Park.

The park is home to the county-managed Hermit Park Open Space, which is about 2 to 3 miles southeast of Estes Park and about a mile from where the Kruger Rock Fire started. It sits among ponderosa pine forests and meadows at 7,880 to 8,964 feet with Kruger Rock jutting upward to 9,400 feet.

Co Fire Aviation co-founders Chris Doyle and Kyle Scott first started looking at the possibility of conducting night firefighting operations in 2010, according to an article in Aerial Fire magazine.

According to the article, Olson was in charge of designing “an intensive training program” and selecting the latest technology to aid in mission safety, which most notably came with advances in night vision goggles to help pilots see better.

In 2017, the company began testing of the technology with the Oregon Department of Forestry, with whom it signed a contract for its services.

That same year, it signed a five-year contract with the state of Colorado to provide on-call aerial firefighting services.

The Division of Fire Prevention and Control stated in its Wednesday release that the plane that crashed was contracted by Larimer County and that it was “not a state-owned aircraft or an aircraft flying under a state contract.”

The agency, which has conducted studies of the use of aircraft in night operations on wildland fire through its Center of Excellence in Rifle, said it is too early to know the cause of the crash  and whether it was related to night operations,.

In a 9News interview in May before the demonstration in Loveland, company spokesperson Zachery Sullivan said the plane drops retardant from an altitude of 60 to 80 feet, adding, “That is pretty close to the ground, day or night.”

He went on to address the misconception of a pilot’s vision during nighttime operations.

“There’s all these things out there that could cause an accident. You can see them better at night than you can during the day,” said Sullivan, a tanker pilot. “A power line is extremely difficult to see during the day. We always look for the power poles, not the power lines, but with this technology we see the lines.”

In addition to night vision goggles, the technology includes using airplanes with infrared lights and people on the ground with lasers to direct drop zones.

Despite the inherent risks, some experts say the technology is accurate, effective and safe because night flying usually involves less wind and cooler temperatures, and because fire conditions usually subside at night.

Helicopters have been used in night fire suppression operations for several years before fixed-wing aircraft began flying the missions.

Miller pointed out the U.S. Department of Defense has used the technology during “millions of hours of flight time.”

“The concept of putting aircraft at high speed close to the ground and releasing stuff from aircraft at night is nothing new,” he said. “Close air support in either case is similar.”