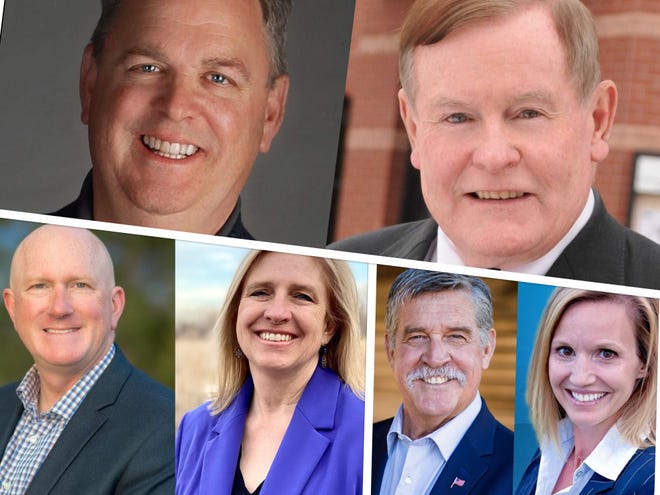 Three candidates in primary races for Larimer County commissioner came out of the gates fast Tuesday night and went on to win their races with commanding leads.

Primary winners will face off in the Nov. 3 general election.

In District 2, which covers the central part of the county, including part of Fort Collins, Republican Bob McCluskey had 59% of the votes counted so far in the GOP race.

His opponent, Jeff Jensen, had 41% of the vote.

McCluskey, a former member of Fort Collins City Council and the Colorado House of Representatives, said he worked hard to get his message out to voters. His experience in business and elected office made a difference with voters, he said.

“We’ve always found that if you work hard and do as much as you can, hopefully good things will happen,” he said.

The winner will face Democrat Kristin Stephens, a member of the Fort Collins City Council, in the November election.

In District 3, which covers the southern part of the county, including Loveland and Estes Park, Jody Shadduck-McNally had 76% of the votes counted so far for the Democratic primary.

Her opponent, former Windsor Town Board member Myles Baker, had about 24% of the votes.

Shadduck-McNally said her campaign was helped by endorsements from prominent Democrats at the state and county levels.

She connected with voters and listened to their concerns about issues such as affordable housing, water, the economy, and how the county will recover from the coronavirus pandemic, she said.

Shadduck-McNally said she cares about the community and the county.

“I think voters saw that and realized I was running with a servant’s heart and wanting to do what I can to work for everyone’s quality of life and do what I can to preserve and protect our county,” she said.

On the Republican side, longtime local businessman Ben Aste had 61% of votes counted so far, and Aislinn Kottwitz, a former Fort Collins City Council member, had 39%.

Aste, who has lived in worked in the county for nearly 50 years, said his long-standing business connections around the county made a difference in the race.

So did his history of contributing to the community through 4-H, schools, and assisting first responders, he said. If something was needed, he delivered as best he could, Aste said.

“I believe that touched the hearts of people and spoke to them, and the motive was pure and simple: giving back to the county that has been so good to me,” he said.

Commissioner John Kefalas, a Democrat, was elected from District 1 in 2018. District 1 covers the northern part of the county, including Wellington, Red Feather Lakes and a section of Fort Collins.

Commissioners must live in the districts they represent, but they are elected at-large by all county voters.

Partial results as of 9:30 p.m. Tuesday, with what appeared to be about 60% of ballots counted.

Kevin Duggan is a senior columnist and reporter. Contact him at kevinduggan@coloradoan.com. Support his work and that of other Coloradoan journalists by purchasing a digital subscription today.