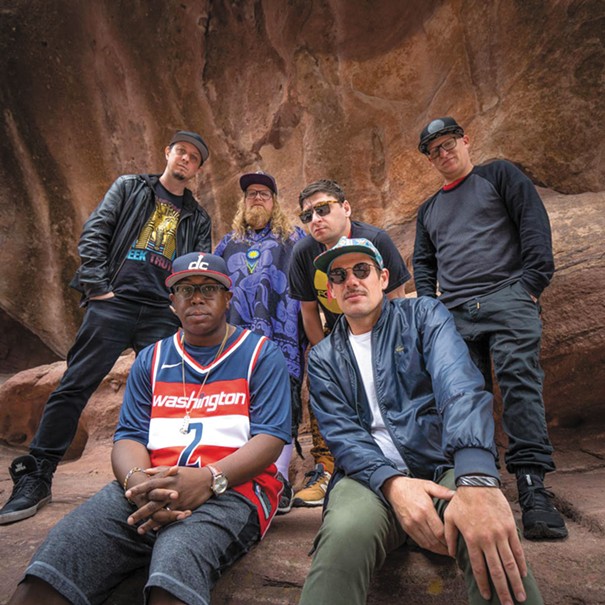 “I think gratitude is the word of the day,” says Lettuce guitarist Adam “Shmeeans” Smirnoff, just hours after learning his band has received its first-ever Grammy nomination.
It’s hardly surprising that Lettuce should end up with a Grammy nomination. What is surprising is the fact that it’s taken 27 years for it to happen.

This is, after all, the self-described “funk/jazz/soul/jam/psychedelic/hip-hop/avant-garde/experimental collective” whose 2015 album Crush reached No. 1 and No. 5, respectively, on the Billboard Jazz and Heatseekers charts. They play annual headlining gigs at Red Rocks, and performed with the Colorado Symphony last year at Denver’s Boettcher Hall.

Currently, Smirnoff and his bandmates — Nigel Hall (keyboards, occasional vocals), Erick “Jesus” Coomes (bass), Adam Deitch (drums), Ryan Zoidis (saxophone) and Eric “Benny” Bloom (trumpet) — are in the midst of a 28-date tour to promote their sixth studio album Elevate, which will be competing in the Best Contemporary Instrumental Album category. The group recorded it at Denver’s Colorado Sound Studios with producer Russ Elevado, who’s best known for his work with artists like Erykah Badu, The Roots and Roy Hargrove.

We caught up with the guitarist by phone before a sound-check in his native New York to talk about the band’s Berklee College of Music origins, their gradual relocation to Denver, and why the Grammy nomination means so much to them.

Indy: Given that Lettuce started when you were all attending Berklee College of Music, it must have been gratifying to perform onstage with the Colorado Symphony. If that were me, I’d have been trying to get my teachers to fly out for the show. Did you do that?
Adam “Shmeeans” Smirnoff: No, I’m not really too close with too many of my Berklee professors, aside from my old guitar teacher Tomo Fujita — we’re Instagram friends and we talk sometimes — and another one of my guitar teachers Richie Hart, because he’s like family. But aside from that, I would just kind of put out there that only Jesus actually graduated from Berklee. The rest of us, we were kind of more like Berklee rebels, to be honest. We were like the kids who were getting in trouble for smoking too much weed at the dorm.

What kind of music were other Berklee students into back then?
You know, with most of the people there during that time, it was like either you were a jazz guy, or you were a rock guy. And we were really into funk music, which wasn’t really happening during the era when we were there. I mean, the whole Berklee thing was really beautiful as far as that being where we met and where our vibes got started together. But we’re not like your quintessential Berklee students who all graduated or anything like that.

I’m curious how you feel about the whole intersection of those genres back in the late ‘60s and ‘70s. On the one hand, you’d have Miles Davis pushing the envelope with an album like Bitches Brew, but then you’d also have smoother jazz fusion artists like Grover Washington and George Benson. Where along that spectrum would you say your influences were?
We don’t have to limit ourselves to who our influences are, you know what I mean? And also, there are a lot of us in the band, and we’re all differently influenced by different things. I don’t really view music in that kind of defined way. Lately, I’ve been using the analogy of modern basketball, where every player on the floor is a positionless player and is asked to do many things at different points — whether it be the point guard sometimes, a scorer at other times, or a rebounder at others. So I just look at music kind of similar to that. We’re trying to play positionless music. We’re trying to play undefined music that is influenced by everything we’ve ever heard. It’s hard to categorize, but it is what it is. It’s who we are.

So both you and the other Adam are both living in Denver now, correct?
Yeah. I got four more days and I’m home. And I think Eric “Benny” Bloom, our trumpet player, is there now as well. And so is Hillary, part of the Regime management team and so is Adrian, our merchandise manager. So yeah, we have a lot of the Lettuce based in Denver at the moment, and we all have our different stories of why and how we ended up here.

What’s yours?
I’m a born and bred New Yorker, and after the Berklee/Boston thing, I moved back to New York and I pretty much lived there for another 20 years. I lived in Queens, I lived in Brooklyn, I lived in Manhattan. And Colorado was one of my favorite places to play and visit, and so many of my friends had already moved there.
Plus, I knew there was already an incredible music scene there. So when my wife got a job in Denver, we moved there and now I have a 2-year-old daughter, and a dog, and a house. I’m a resident of Denver — that’s where my family is — and I really love my life.
Back in September, Lettuce played up there at a pot dispensary called Terrapin Station.
Oh yeah, we played in their grow house. We did a YouTube video, go look it up. It’s called “Shmink Dabby.”

So I take it that you guys still smoke pot?
If you’re asking me personally, I consume THC every day. I am mostly a low-temperature dab guy. And I prefer resin, or water hash, or a water hash derivative. I battle a form of rheumatoid arthritis, and I’ve found that it’s really, really helped me. I’m doing the gym like six days a week. I’m eating no sugar, no carbs, I’m running. I’d say I’m in the best shape of my life right now.

And on top of all that, Lettuce now has its first Grammy nomination. I know you all do lots of work outside the band. Have any of you worked on other Grammy-nominated recordings?
Yeah, I think all of us have. Especially Deitch with John Scofield, and I think me and the horns with Tedeschi Trucks [Band]. I also performed the opening of the Grammys in 2010, when I was a side musician with Lady Gaga, and I played with Elton John, too. But you know, none of that compares to what we’ve built together here, and how much work we’ve put into this. And to have that kind of recognition from the industry is really mind-blowing, really surprising to me, and really humbling.

So how are you going to celebrate?
We’re going to play a show tonight.