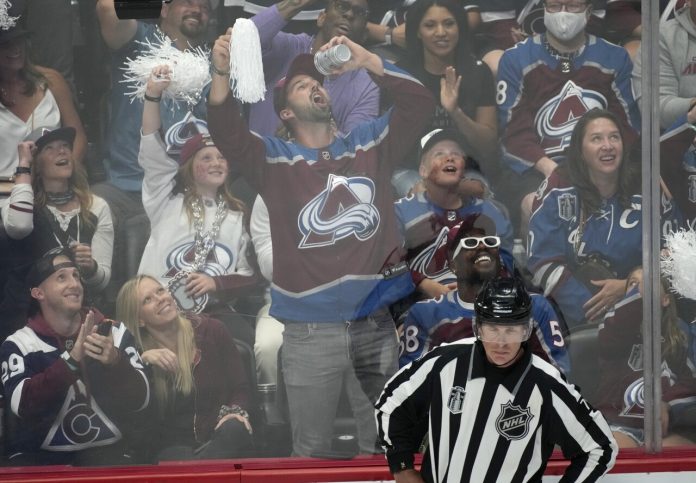 DENVER — The Colorado Avalanche try to clinch their first Stanley Cup in 21 years in Game 5 at Ball Arena in Denver.

The Avs won 3-2 in an overtime thriller in Tampa on Wednesday to take a 3-1 series lead. Colorado is now 15-3 during the playoff run.

MORE: Photos: Avalanche and Lightning square off in Game 5 of 2022 Stanley Cup Final

Denver7 is the home of the Stanley Cup Final throughout the playoffs, and we’ll have pre-game and postgame coverage after each game of the series, which you can watch on Denver7 or on the free Denver7+ streaming app, which is also embedded below.

We have a full slate of coverage on the series, what fans need to know and plenty more about the Avalanche and their past Stanley Cup winning teams on our Avalanche Stanley Cup page.

Below, we’ll be posting live updates from the game and from our reporters across Ball Arena and Denver as the Avs try to clinch the Stanley Cup. (All times Mountain. Refresh the page for the latest updates.)

Avs finished with 11 giveaways to Tampa’s 3. Other than that Colorado won every statistical battle in game 5 #Denver7

9 p.m.
The Avs get called twice for offside at the end of the game. We’re headed back to Tampa for a Game 6 on Sunday after the Lightning win 3-2 in Denver.
8:58 p.m.
Back to full strength with 40 seconds. Kuemper leaves the net.
8:53 p.m.
The Avs get called for too many men on the ice with 2:38 left in the third. Tampa Bay gets a power play.
8:45 p.m.
Kuemper lets one squeak through his legs and past his stick. It’s 3-2 Lightning with 6 minutes left. Ondrej Palat gets credit for the goal.
8:43 p.m.
Makar has 29 points this postseason, and Game 5 is his eighth multi-point game of the playoffs.

8:40 p.m.
Makar is grimacing a little here…
8:34 p.m.
They credit Makar with the second goal, his eighth of the playoffs. He has 29 points during the playoffs. The Avs are running away with the shot total in this period, now up 35-23.

Avs on the attack. Just like game 4. Attack attack attack. Wear down the Lightning. Score late.

8:32 p.m.
The Lightning hit the post and Bo Byram has one swallowed up by Vasilevskiy on the other end. We’re still tied at 2-2 with 10:49 left in the third.
8:22 p.m.
NICHUSHKIN GETS GOAL NUMBER TWO AND TIES IT UP IN DENVER! Makar’s shot rebound goes off Nichushkin’s skate and into the net. 2-2 2:32 into the third period.
8:20 p.m.
The third period is underway. Let’s go Avs!
7:59 p.m.
Plenty of action on both ends to end the period but we head to the second intermission with the Lightning still leading 2-1. The Avs have 26 shots to the Lightning’s 19.

You’re going to have to kill this Lightning team. They’re the Ruth Langmore of hockey #Denver7

Nathan MacKinnon has been so good in this series everywhere except for scoring goals. It’s starting to feel like in order to finish this thing off and hoist the cup, he’s going to need to put everything else aside and go MJ #Denver7

7:43 p.m.
Mentioned earlier that Brandon McManus was in the house…

7:34 p.m.
And the penalty pays off for the Lightning, who score on a goal by Nikita Kucherov. 2-1 Lightning with 11:30 left and we’re now back to full strength on both ends. THe Lightning are now 2-for-17 on the power play this series.

7:31 p.m.
And the refs decide to call a tripping penalty on Makar after his stick gets stuck between a Lightning player’s legs. 4-on-3 hockey for 1:29.
7:28 p.m.
Thought the Avs were getting a power there on an Alex Killorn penalty, but the refs call one on JT Compher too, so we’ll get 4-on-4 hockey for the next two minutes. 13:33 left in the second period.
7:25 p.m.
AVS SCORE!!! Vasilevskiy can’t get ahold of a shot by Cale Makar, which rebounds out in front of the crease. Val Nichushkin puts the rebound in the back of the net. 1-1 Avs with 14:40 left in the second. Makar adds another point to his tally.
7:24 p.m.
A few shots on goal for both teams through the first 4:30 of the second period, but nothing in the net. Lightning lead 1-0.
7:17 p.m.
We’re back underway for the second period!
7 p.m.
The Avs trail 1-0 after the first period due to the Rutta goal. They lead the Lightning 13-11 in shots and have had several good chances. Kuemper’s made some solid stops so far too.

Almost even on hits and shots (13-11 in Avs favor) in first period. #Lightning pressured Avs early, playing their best first period in Denver. And #Avs rallied late. They trail 1-0 on goal Kuemper would like to have back. #Denver7

6:56 p.m.
MacKinnnon JUST missed the net on a breakaway, putting the puck through Vasilevskiy’s legs but just past the left post. 10 seconds left in teh first.
6:53 p.m.
We’ve got some Broncos legends in the house for tonight’s Game 5!

6:49 p.m.
And Tampa Bay is first on the board as Jan Rutta sends a slapshot between Kuemper’s glove and pad. 1-0 Lightning with 4:30 left in the first.
6:43 p.m.
The Avalanche get two shots on goal during the power play — both easy stops by Andrei Vasilevskiy.
8:51 p.m.
The Avs nearly score on a shot by Kadri during a delayed penalty and now get their first power play of the night after Nathan MacKinnon gets tripped.
6:36 p.m.
And the Avs kill off that penalty too — even getting two shorthanded shots on goal themselves. It’s still 0-0 with 10:25 left in the first.
6:32 p.m.
The Avalanche catch another penalty — a hooking violation on Nazem Kadri. Lightning take the power play with 13 minutes left in the first.
6:27 p.m.
The Avalanche kill off yet another Lightning power play! Back to full strength.
6:24 p.m.
The Lightning get their first power play a little over 3 minutes into the first after a high stick by JT Compher.
6:23 p.m.
One thing’s for sure already in this game — both teams are hitting!
6:14 p.m.
It’s time, Avs fans! Let’s bring it home!
6:05 p.m.
Here is your Avs lineup for Game 5! No Andre Burakovsky tonight.