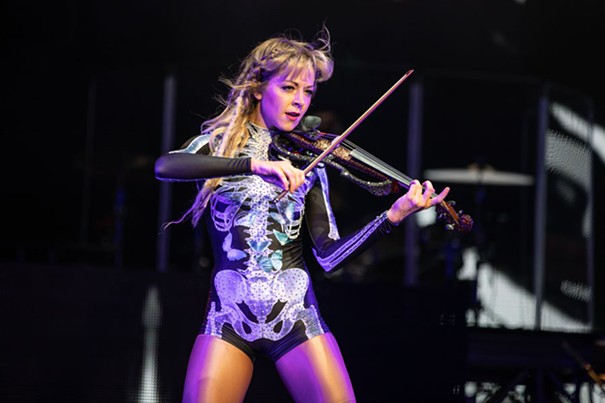 “It is very unnatural to dance while playing the violin,” Lindsey Stirling observed in a Reddit AMA back in 2013. That was the same year she signed a deal with Lady Gaga’s manager and collaborated with Pentatonix on a cover of Imagine Dragons’ “Radioactive,” which has since racked up more than 180 million YouTube views.

And that was just the beginning. One year later, the former America’s Got Talent quarter-finalist released her sophomore album Shatter Me. An amalgamation of EDM, neo-classical and rock music tropes, it shot to No. 1 on Billboard’s Dance, Classical, and Indie charts, one of the most statistically impressive crossover feats since Wynton Marsalis won simultaneous Classical and Jazz Grammy Awards three decades earlier.

Two months ago, Stirling managed to repeat that same hat trick with her no-less-dramatic Artemis album, irrefutable proof that she’s eclipsed Mitt Romney as The Most Famous Mormon in Show Biz. She’s also developed a reputation for elaborately costumed and choreographed concerts that make Trans-Siberian Orchestra and Riverdance look undermotivated by comparison.

The unnaturally hyperkinetic violinist/dancer/composer’s upcoming Colorado Springs date is part of her “Warmer in the Winter Christmas Tour,” which goes heavy on the holiday theme with time-tested standards like “Santa Baby” and “Dance of the Sugar Plum Fairies” alongside Stirling’s own “Christmas C’mon” and “Warmer in the Winter.” Given that setlists for her recently wrapped European tour included a cover of Leonard Cohen’s “Hallelujah,” it’ll be interesting to see if the late singer-songwriter’s most funereal ballad can survive a full-on Nutcracker makeover. Stranger things have happened, but not often.