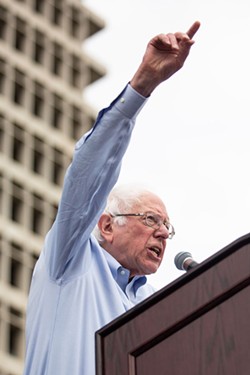 After watching the Democratic debate Friday night, I came away with the same mostly depressing thought I have after watching every Dem debate.

Why wasn’t there more emphasis on the dangers of an unchecked, post-acquittal Trump? Why wasn’t Trump’s vindictive Friday Night Massacre the very first question? Of course, a primary is a time to air grievances among competitors — or, in the best case, show real differences in policy — but did we really need to hear another round of rehashing the same points in Medicare for all vs. Medicare for all who want it? Unless Dems win the Senate and kill the filibuster, they won’t come anywhere near getting either. And even then, it’s hardly a sure thing.

As the polls show, as every thinking person not given over or given in to the cult of Trump must know, the most important mission for Democrats is to beat Donald Trump in November. I hoped the debate would help us better measure the candidates — not just in how well they call out Trump, but also in how they might compete against him.

There was a time when many of us thought anyone could beat Trump. That time is no more, and it’s something you can’t overstate. As Ben Bradlee/Jason Robards told Woodward and Bernstein in the movie version of All the President’s Men, in the time of a different dangerous president: “Nothing’s riding on this except the, uh, First Amendment to the Constitution, freedom of the press and maybe the future of the country.” Maybe Bradlee never said those exact words, but the stakes were definitely not exaggerated.

But there’s a catch here, an overriding catch. The trouble with the notion of electability is that no one has any real idea who the most electable Democrat would be. I mean it. No idea. Trump is such a wild card who revels in the fight and especially in fighting dirty that few of the old rules stand. The New Hampshire polls showed a surging Pete Buttigieg in basically a tie with Bernie Sanders as co-leaders. But we should remember that in 2008, Barack Obama had a 10-point polling lead over Hillary Clinton in New Hampshire after winning Iowa — and lost to her after Clinton’s near-tears moment.

And now there’s the looming figure of Mike Bloomberg and the billions he’s willing to spend when the primaries move on to Super Tuesday. If Biden continues to fade, Bloomberg could become a real factor, particularly as a potential foil for Sanders. But would Democrats truly ever nominate a billionaire to run against a billionaire?

I laugh when I hear that the Democratic establishment, which greatly fears that Bernie Sanders will get the nomination, hasn’t done enough to stop him. As if the establishment should somehow try to quash all those who send Bernie their hard-earned money. As if grassroots activism should be actively discouraged. As if the Dem establishment, which couldn’t even ensure the votes would ever get counted in Iowa, has the power to stop, or start, any candidate.

Joe Biden is the perfect case in point, but I can make similar arguments in nearly every case. I have long thought that Elizabeth Warren has the best chance to beat Trump, the Pocahontas smear and the isn’t-she-too-strident sexism notwithstanding. But she finished third in Iowa and she was running third in the New Hampshire polls. And although she’s clearly the best debater on the Dem stage — and seemed to handle every question well Friday — she probably didn’t do herself much good. With Bernie leading her among the party left and Buttigieg cutting into her base among high-information voters, Warren has to find a new lane, as an anti-corruption candidate who can unite both sides of the party. She didn’t make that case well enough Friday. Does she have the time or money to make it, period?

Once the clear front-runner, Biden has run his entire campaign on his supposed ability to stop Trump and bring us back to the pre-Trump days of — and these might not be his words — a survivably dysfunctional version of Washington. His out-of-the-gate poll position seemed a testimony to that strength. But now, following his fourth-place humiliation in Iowa, he offered up a disastrous answer to the opening debate question about New Hampshire when Biden conceded he would probably “take a hit” there, too. It’s possible to win the nomination, I guess, by beginning with two fourth-place finishes. But for a candidate running low on money, whose expected firewall in South Carolina may have taken on some water, whose debate performances are consistently weak, he’s now an underdog.

Meanwhile, Bernie is Bernie. He’s the candidate you don’t have to watch or even hear to know what he’s saying. He says much the same thing, with much the same passion, every time he speaks. He’s a straight seven (out of 10) in debates. He has nothing new to say because he has been saying much the same things for 40 years. The Dem establishment is nearly as afraid of Bernie’s base — made up overwhelmingly of young Democrats who have no fear of the word “socialism” — as Republicans are of Trump’s. No one like Bernie has ever been president, to which the obvious rejoinder is, no one remotely like Trump has ever been president.

In the debate, Buttigieg took a few hits, particularly effective ones from Amy Klobuchar, which was fitting given his position near the top of New Hampshire polls. For me, the question is not whether the former mayor of South Bend, Indiana, is too young or too inexperienced, but whether he has more to say, and believe in, than being smart and articulate and able to sort out platitudes in a way that they seem, to many, like something new. But on the day after the debate, Biden went on attack, saying, “Do I think it’s a problem if our nominee” is someone whose highest office is mayor of South Bend? “Yeah, I do.” Buttigieg is young, he has captured the critical idealistic brand, but to this point has little support in the African American community, based, in large part, on his problems as mayor with the town’s black activist community. If he can’t find a way to appeal to minority voters, he can’t win. In the debate, Warren took every opportunity to weave in minority concerns. Buttigieg was challenged on rates of African American incarceration in South Bend, and seemed, for once, a little flustered.

When Buttigieg is speaking, I know that some of Michael Bennet’s supporters think if he’d gotten into the race earlier, he might have gotten a decent piece of that moderate policy-nerd vote — and with 10 years of experience as a senator to fall back on. But he didn’t get in early because he had prostate cancer. And, after doing 50 town halls in New Hampshire, he’s still polling at 1 or 2 percent there and could never find his way back to qualify for the debate stage. That’s too bad because he had a great line the other day on the post-acquittal Trump — that he’s like one of those Roman emperors who has turned his army around and is now marching on Rome. But New Hampshire will almost certainly be the end for Bennet’s campaign.

Last but not least (I’ll leave Yang and Steyer to their respective fans), there is Amy Klobuchar, who was generally seen as having had the best debate night. The problem for her is that she always does well in debates, but it never seems to move the needle. Her main argument for electability has been that she’s the Minnesota senator who knows how to win in Rust Belt states and certainly knows more about it than the ex-mayor of a small Indiana city. But Iowa was where she needed to break through and she finished fifth. I have no idea why she would do much, or any, better in upcoming primaries.

So that’s the post-debate field. It’s not that the Democratic field is particularly weak. Most fields look weak until you have a winner. It’s that the stakes are so great, the risks so high and the best path forward still so uncertain.