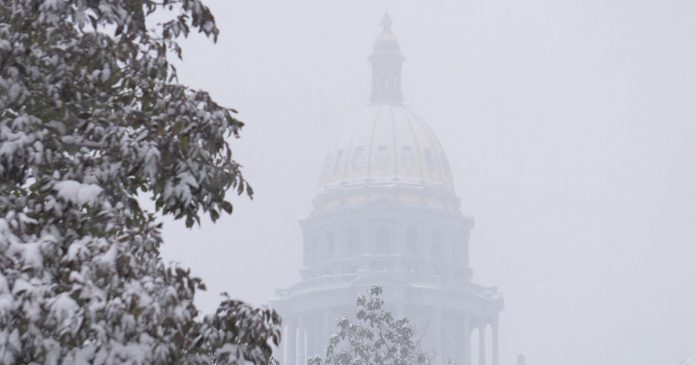 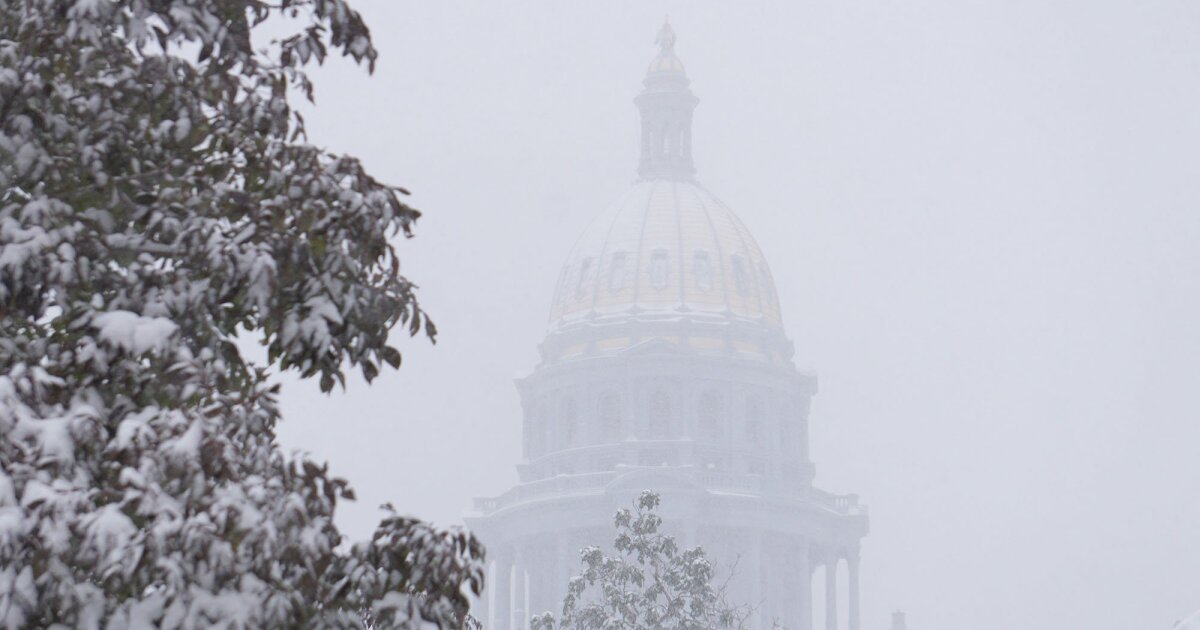 DENVER – Colorado continues to prepare for what has the potential to be a major March snowstorm that could bring a foot of snow to the metro area and up to 3 feet in some of the northern foothills.

Light showers are likely to begin in the foothills Friday night and gradually increase to a light snow or drizzle on Saturday morning before the snow picks up and becomes more widespread on Saturday afternoon, according to the latest forecast.

The heaviest snow is expected to fall Saturday night into Sunday and is likely to continue through the day Sunday with some lighter periods of precipitation. The highest totals are expected in the foothills east of the Continental Divide, but a foot or more is expected in Denver and to the west into the foothills from Douglas County up to the Wyoming border.

Gov. Jared Polis has activated 50 Colorado National Guard soldiers and airman to be prepared to respond to stranded motorists and for search and rescue operations.

If you’re on your computer or phone, you can view Denver7’s 24/7 weather stream anytime by clicking here or watching in the player below.

We will be updating this live blog throughout the storm with the latest weather, traffic and storm news updates. Refresh the page for the latest updates (All times Mountain):

Denver7 Meteorologist Stacey Donaldson gives you a look at the latest Denver7 forecast:

The westbound lanes of I-70 were all back open by 4:30 p.m. at Dumont after this morning’s semi-truck crash and fuel spill, and traffic had eased by 5 p.m.

Clear sailing along I-70 from Golden to Beaver Brook. Not bad for a Friday evening before a massive snow storm. Hopefully you can get to where you’re going tonight and stay home or up in the mountains tomorrow. #Colorado pic.twitter.com/MT2EDEvLp1

But Colorado State Patrol was also catching people driving on the unfinished I-70 westbound express lane, which is not yet finished and should not be used.

Westbound I-70 From Floyd Hill to Empire Junction **

IMPORTANT NOTE: The westbound Express Lane is not open. It’s not even finished yet ! 🚧🚧🚧🚧

Be the tortoise, not the hare 🐢🥇 and you’ll get there.

We’ve updated our snow forecast and timeline story to include the latest from the Denver7 meteorologists and National Weather Service meteorologists.

The NWS’s updated forecast discussion, which was issued at 3:50 p.m., says they are sticking with their forecasts from earlier in the day, with 14-24 inches forecast for the I-25 urban corridor, with heavier amounts toward Boulder and Golden. The foothills should still expect 2 to 4 feet, with highest totals in Larimer County, though there is still some uncertainty.

The NWS forecasters said there is still variability in how much water will be contained in the snow that falls and still some question about exactly where the storm sets up and whether or not a dry slot will develop, which could dampen snowfall totals.

But in the end, the NWS said northeastern Colorado is still on track for a major winter storm.

“Whatever the case, almost all of northeast and north central Colorado should be prepared for a major winter storm. Travel may become impossible due to the depth of accumulating snow across the foothills and I-25 Corridor. Scattered power outages will be possible as well,” the NWS said.

Denver7 Chief Meteorologist Mike Nelson talked about the latest modeling and forecasts as of 4 p.m. in a discussion with Denver7’s Jason Gruenauer. Watch the full discussion in the player embedded below.

Rocky Mountain National Park, which is expecting more than 2 feet of snow in the storm, is already closing roads on the east side of the park to allow snowplows and emergency responders easy access if necessary.

Wild Basin Road and the Longs Peak Trailhead parking area will close at 4 p.m. U.S. 36 will close at 6 p.m. at the beaver Meadows Entrance, as will U.S. 34 at the Fall River Entrance.

Morain Park Campground is already shut down, and the Beaver Meadows and Fall River visitor’s centers will also be closed this weekend.

Cities and counties across northeastern Colorado are laying out their plans in preparation for this weekend’s storm.

In Greeley, the city says that plows will be on a priority system to first get to the key roads that connect hospitals, police and fire stations before moving into residential areas. The city has also closed the community testing site on the UNC campus Saturday and Sunday.

In Estes Park, where 3+ feet could fall this weekend, crews are ready to plow roads, but are asking residents not to park on narrow streets to be sure plows and emergency crews can get through. The town is also asking people not to shovel their sidewalks and driveways into roadways — as well as asking people not to travel if it is not necessary.

In Denver, Mayor Michael Hancock urged Denverites to stay inside and avoid driving as much as possible.

“We’ll be ready to address whatever comes with this storm,” he said.

DOTI Executive Director Eulois Cleckley said snowplow crews have been on the streets since midnight in case a band of snow came through Friday. He said 70 plows will address main streets and 36 4×4 pickups will work on the smaller, residential roads this weekend.

Cleckley said the trucks do not plow the street down to the pavement, so drivers should still exercise caution in their streets as the packed snow and icy may still be hazardous.

Drivers should expect poor driving conditions through at least late Sunday, and possibly into Monday morning. This means the snowplows will stay on the roads for several days.

The Denver Zoo says it is likely to close for the weekend if the forecast is accurate and that animals have dry and warm places to stay as necessary. The Denver Botanic Gardens will let the snowfall in preparation for the spring bloom, which needs the extra water. The Denver Art Museum will be closed this weekend.

In Littleton, crews are ready with several plows and other heavy equipment, which will be working 12-hour shifts beginning at midnight.

Poudre Fire Authority says it has search and rescue staff on call through the weekend, and firefighters are prepared to work extra hours to respond to fires, power outages and emergency calls.

While Denver Health, UCHealth, Centura Health and others had already rescheduled their vaccine clinics for this weekend, Children’s Hospital Colorado announced it will be doing so as well.

Children’s has canceled vaccine appointments for Saturday and Sunday, but have automatically rescheduled people’s appointments, a spokesperson said. People with questions or concerns are asked to call 720-777-8889.

1:15 p.m. | Colorado snow forecast: Here’s what to expect — and when — for this weekend’s storm in Denver area

Ready or not, snow is on the way.

And the various forecasts and models and projections are in agreement that we’re likely in for a steady, multi-day storm.

Starting late Saturday morning, we’re expecting heavy snow to begin falling across Colorado’s Front Range, including Denver, and into southern Wyoming. The storm is likely to dump snow through the weekend before clearing out of the area on Monday morning.

But if you know Colorado weather, you know nothing is certain. We could see some changes to the timing of the storm and how much snow falls where.

So let’s walk through, generally, what you can expect — and when — as we head into the weekend, according to our Denver7 forecast and the National Weather Service in Boulder.

12:03 p.m. | Long backups on WB I-70 from Denver to mountains after semi-truck crash, hazmat spill

People hoping to get up into the mountains from Denver on I-70 Friday morning ahead of the snowstorm should expect to sit in traffic for some time after a semi-truck spilled fuel across the road near Dumont.

By 11 a.m., one lane of westbound I-70 had been reopened at Dumont, but it was taking drivers at least two hours to get from Denver to the Eisenhower Tunnel, and the traffic backup was not expected to get much better before the early afternoon.

The Colorado Department of Transportation said alternate routes, including U.S. 285, have long backups as well as people try to beat the storm.