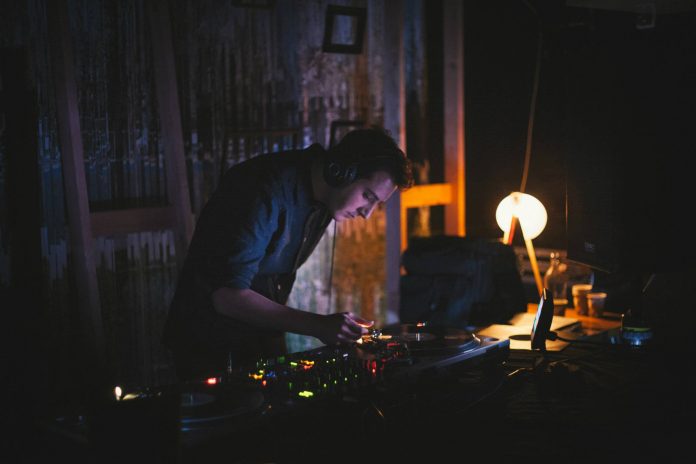 Zone Motif, one of three aliases used by local musician Miles Hurwitz, will be releasing his second full-length album on November 15 on record label New U.S. Government. Hurwitz, who helps run the record label and party series Deep Club, quietly chugs away at production, ceaselessly outputting one release after another without sacrificing quality.

Zone Motif is the outlet for Hurwitz’s more ambient-leaning productions — that is to say, the productions that have less emphasis on a danceable beat and feel more like explorations in soundscapes. This newest release, self-titled as Zone Motif, takes listeners on a journey into deep space with eerie and suspenseful electronics.

The opening track, titled, “All There Is,” invokes imagery of a rising, distant sun peaking around the curve of the Earth, as if one was watching dawn break far away from planet Earth. Powerful, glittering modulation paired with ominous — almost alien-sounding — synth pulses help conjure this image of departure from the home planet. Quite literally launching the album into the stratosphere, “All There Is,” introduces the journey listeners are about to embark on before fading out in a chilling, unsettling quiet.

The second track, “Conduit,” continues the quiet suspense. The analog alien squelches carry from into this track, invoking imagery akin to the unseen potential of life in outer space. Wooden chimes clash fantastically with 8-bit synth patches, a merging of the natural and man-made worlds, as they build upon each other to draw out the anxiety of the unknown entities floating just beyond the scope of vision. The seemingly contradictory sounds all acquiesce into an almost discernable melody before slowly dissolving back into chimes once again.

The next track, “Navigating Bleep Field 974,-283, 051 (Jazzy Mix),” begins with scattered, fast and ticking percussion. The track initially gives off the impression that it will be a fast, foot-working juke track, an impression compounded by the fat bassline that kicks in shortly into the song. Light but firm jabs on the synth cut through layers of softer pads, building into a crescendo, before slowly fading away into the inky blackness of deep space.

“Translucent Form,” most forcefully conveys the image of floating weightlessly in zero gravity. Hurwitz lets the chords reverberate through the silence as if the notes themselves were bouncing around distant corners of outer space. The track sounds almost melancholic thanks to a slightly slower modulation of the minor chords, channeling the feeling of nothingness one experiences when confronted with the sheer magnitude of the galaxy’s endless boundaries.

The dawn of a new day is conjured up in, “Threads.” While still tinged with melancholia, the echoing delay and slow-building percussion work together to create a feeling of hope, an unseen force lifting one’s chin upwards. This song then gently builds back down, step by step, so that it’s nearly unnoticeable until the track finally ends with a single, vibrating note.

Jagged, acid jabs start the sixth track of the album, “Orbiting,” off. The harsh synth makes the listener anticipate a hard-hitting kick to catapult the track into a warehouse banger, but Hurwitz lets the high notes layered atop ring out. The ethereal notes help create tension. When a heavy and deep bass finally pulses its way into the track — combined with a pinhole effect of a low pass filter and a wall of synth notes that detune as they fade out — the suspense is nearly palpable. Percussive claps suddenly cut in, while the ever-ominous drone sustains in the background all the while, executing successfully a dreadful sense of foreboding.

Warm, synthetic string instruments introduce, “Sympathy Vibration.” Wooden percussions have returned in this track, plinking gently in the distance as the strings continue to drone in the foreground. This track signals the beginning of the journey back to Earth, a reminder of the natural world after a long voyage through the vacuum of deep outer space.

Mesmerizing and reverberating notes magnetize towards each other in the final track, “State of Being.” The distant chopping of a helicopter’s blade slowly fades in and out throughout the duration of the track, while deep, throaty voices drone in briefly. A flattened bass marbles across the surface of all the different sounds, creating an overall disorienting and intoxicating experience. It’s as if the traveler has returned from space a changed person, and this track is the reflection of the disassociation felt back on Earth afterward.

Overall, this album sounds like the soundtrack of an alien abduction, but from a friendly alien who needs your help for some sort of idiosyncratic task. This album tells a galactic story of fear and uncertainty, of loss and hope and how change is inevitable. Hurwitz makes a big use out of silence, creating empty space between each sound heard to fully allow each individual plink, zap, jab and pulse to unfold undisturbed. Those empty spaces allow the listener’s imagination to wander, triggering the film reel of the mind’s eye to flicker into life.

And Hurwitz takes his Zone Motif moniker seriously, subtly inserting and returning to various auditory motifs throughout this soundscaping album. From the ethereal droning to the alien modulation and the gentle rhythm of wooden chimes, Hurwitz successfully walks the fine line of complexity and completely abstract gracefully. Zone Motif is, quite literally, out of this world.

You can pre-order Zone Motif here.