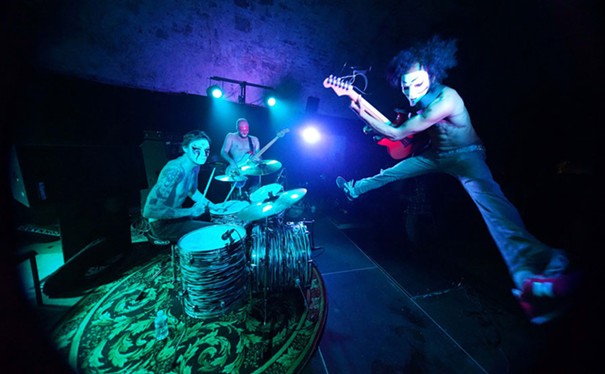 They say the unexamined life is not worth living, so what of an unexamined year? Well, no need to even speculate, because there were myriad memorable moments from 2019 that local musicians were happy to look back upon. As we welcome the dawn of a new decade, I’m sure I speak for everyone when I say that I’m looking forward to building upon these experiences and having an exceptionally creative new year.

“2019 was a rad year for me and for the Colorado Springs music scene,” says Bryan Ostrow, a musician and general behind-the-scenes all-star. As with most musicians and other human beings, his personal life during the year bolstered his professional life.

“I got engaged, which I’m stoked on, and that should make 2020 a great year. As far as music goes, we really got to book a variety of venues this year, which was great. Brewer’s Republic let us start throwing shows in the old Underground building, which was incredible.”

The old Underground, of course, has functioned, separately, as both one of the city’s top bars for the local LGBTQ community and a nexus for some of the best local rock, goth and post-punk acts Colorado Springs has seen. The Autono, The Creeps, Evie’s Edge, Zen Radio, Random Spex… the list goes on. It certainly feels good for one of the city’s musical landmarks to return to life.

“We hosted a show for Big Brave and Vale there in June, and it was an amazing experience,” continues Ostrow. “We also did a last-minute show for Ceschi there in October with Bullhead*ded and Clarion Void, which was a killer, energetic show.”

Ceschi was also a key figure in one of Ostrow’s biggest highlights of the year — the release party for Ceschi’s LP Sad, Fat Luck, where the emcee was backed by a full band and joined by Factor, Zeta, Gregory Pepper, Spoken Nerd, Cheap Perfume and Saustro.

“That show was packed, and full of the best energy,” Ostrow remembers. “Zeta has played out here about three times this year, and it is always an amazing time with the best people.”

Ostrow also lists Guttermouth’s rapidly sold-out appearance at the Triple Nickel Tavern, “crazy, as you’d expect,” and recalls some more personal milestones, such as the self-titled LP release of his black metal project Upon a Field’s Whisper, 908’s split 7” release with German grindcore act Trigger, and the “excellent time” had during Night of the Living Shred’s slot at the Minneapolis-based Moodhouse Fest, curated by noise-rap luminaries Moodie Black.

“Bar-K let us host a 60th birthday party for my dad in which Dressy Bessy and Night of the Living Shred played, and it was a blast. To end it all off, The Odd Show at Lulu’s was a great, fun variety show. A fun experience that was a great way to end the year. Looking back, it was a pretty swell year!”

The Dec. 12 Odd Show was also an immediate highlight for guitarist/composer Brian Elyo, aka mobdividual, whose noisy, towering, and beautiful soundscapes are a wonderfully unique entry into the local musical canon.

“The whole idea was for artists to do something onstage outside of their comfort zone,” explains Elyo. “Since I’m known for original instrumental music, I played my guitar and sang for an audience for the first time ever — a medley of cover songs.”

Elyo also looked back fondly on an October ArtPop/Pikes Peak Arts Council event where he provided music for Chris Bullock’s reflections from his time in China.

“[Chris] read some diary-style prose writings, and I used three different sound sources around the room and some music I had pre-recorded for him based on some videos he’d shared with me.”
Rather than his trusty guitar and amplifier chain, Elyo made creative use of some consumer electronics for the occasion — a cassette and two phones.

Musician, video journalist, and zine maven Kate Perdoni, meanwhile, added to the chorus counting themselves thankful for the emergence of Lulu’s Downstairs as a new venue in 2019. Along with gracing a new stage at Lulu’s, Perdoni also reflected on her opportunity to play on one of the most iconic stages in the world.

“My favorite shows to play this year were Red Rocks’ Film on the Rocks with my squad Spirettes, and also scoring a planetarium TedX experience with Jay Marz and our installation noise project LiteLvL. Being able to bring my son to awesome outdoor venues is always a plus. It’s rad to see huge organizers like UMS and FoCoMx with super family-friendly programming!”

“They literally set the drum kit on fire,” says Stone. “And the audience was so elated that Dave [Baumgartner, bartender] came out from the behind the bar… just beaming.”