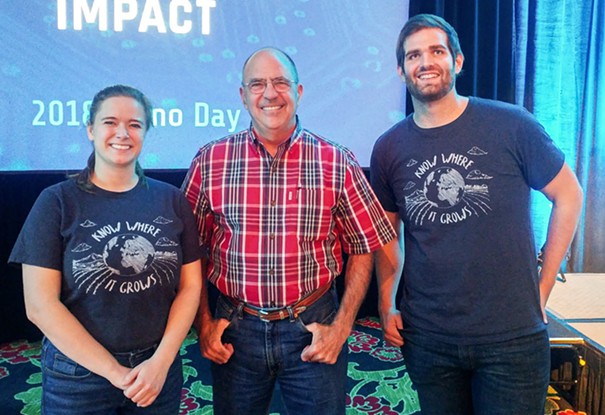 Colorado Springs-based Bytable has a lot on its plate, thanks in part to a $437,000 grant from the U.S. Department of Agriculture.

The startup operates an online marketplace where customers can purchase food produced with regenerative agricultural practices — a step above “sustainable” — from small to medium-sized farms and ranches. It also uses blockchain technology (developed for cryptocurrency record-keeping) to improve product traceability and temperature monitoring.

Those suppliers say they employ principles of regenerative agriculture, a system that “increases biodiversity, improves watersheds, enriches the soil, increases carbon sequestration, and enhances ecosystems,” according to Bytable’s website, which adds that they care about animal welfare, and don’t use antibiotics or pesticides.

Bytable co-founder and CEO Jacy Rittmer says the USDA grant will help the company expand to serve more such producers, at least 20 by 2022.

Rather than selling food wholesale, Bytable is taking a different approach by selling to individual consumers. Rittmer thinks the company’s online marketplace will provide a viable path for people to start thinking about where they’re buying their food, while providing better margins for producers.

Consumers “are even more concerned with where their food is coming from than they have been before, and they’re working on getting away from the industrial system,” she argues.

“We really do want to give consumers the opportunity to make that move if they want to, because right now that opportunity’s either not there or it’s not honest,” Rittmer adds, explaining that large companies will just change their branding to make their food sound more ethically and sustainably produced.

Rittmer was raised on a farm in Iowa, she says, and “grew up incredibly spoiled” eating food her family grew, along with meat from local producers.

“Once I got out of the house and I went to college, and I started my own life, I realized that that’s not something many people have, is access to really well-produced food,” Rittmer says. “And that’s just a shame. I mean, how much time and money do you spend on food in your life to not be eating something that’s good?”

Bytable started with traceability in mind, a focus on consumer confidence in food origin and quality. In 2018, Rittmer, along with co-founder and Chief Technology Officer Brett Dugan, moved to Colorado Springs when they were selected to join Exponential Impact’s startup accelerator program for entrepreneurs.

There, they met Callicrate, whose ranching operation is based in St. Francis, Kansas. Callicrate also operates two Ranch Foods Direct retail locations in Colorado Springs, and has been an outspoken advocate for regenerative agriculture — and an opponent of industry practices that, in his eyes, short producers of hard-earned cash in order to give consumers the cheapest possible prices.

It’s a system that helps big-box grocery stores and industrial food suppliers such as Sysco and US Foods get rich, while putting small producers out of business, he will tell you.

But Bytable is different: “We’re very excited about this project,” says Callicrate, whose partnership with the startup allows Bytable to use Ranch Food Direct’s warehouse, as well as run his online sales. “It really is the answer for the consumers that want to know where their food comes from, and it’s the answer for producers that want to connect with those consumers.”

By talking with Callicrate, Rittmer says, Bytable’s founders discovered that their startup could not only help consumers learn where their food came from, but also benefit farmers.

“In the existing system, the farmer gets around 14 cents of every dollar spent on food,” Rittmer says, “but in the system that we’re working within, it’s around 75 to 80 percent.”

Some farmers, including Callicrate and Dan Hobbs of the Rocky Mountain Farmers Union, worry that Coloradans just don’t care enough about where their food is coming from.

That applies especially to some restaurants, school districts and hospitals that aren’t buying food locally — instead looking to industrial-scale suppliers who can provide mass-produced meat and produce at the cheapest possible prices, as Hobbs told the Indy recently.

“I’m just concerned that people don’t even understand,” Hobbs says. “Before we get to the solutions, people need to understand what the problems are.”

And according to Hobbs, problems include the loss of agricultural land to development, hemp production, a labor shortage and climate change, all of which make it increasingly difficult for smaller producers to earn a profit. Those issues are exacerbated by restaurants and schools fighting for increasingly cheaper wholesale prices.

It’s clear that getting the masses to buy local, ethical food produced using sustainable or regenerative practices isn’t easy. But plenty of Colorado ranchers, farmers and distributors have been working for years to make change a little more appetizing.

Liza Marron, the coalition’s executive director, notes that although the San Luis Valley is “one of the most important agricultural regions in southern Colorado,” most of its produce is exported out of the state. With that in mind, the coalition is partnering with local farmers markets throughout the region, and plans to use the grant money to help fund advertising and staffing.

But the San Luis Valley has its own unique challenges getting people to buy local.

One difficulty, Marron says, “is distances. This is a vast valley, and so to get a good consumer base connected to a farmers market, there’s a lot of travel involved.”

It’s also a low-income region, so farmers markets must “keep our booth fees low so that farmers can afford to sell their fruits and vegetables at a reasonable cost.” One of the markets will offer a booth where farmers can drop off produce so they don’t have to stay all day.

The grant, Marron hopes, will give a financial boost to farmers markets in the region that will eventually make them more self-sustaining.

And for producers, Bytable could mean much-needed technical assistance on top of better margins.

For example, Callicrate says that Bytable’s technology allows him to sell cuts of meat online at varying weights — a seemingly small benefit that “changes the world” for a meat processor.

“If I have to cut every ribeye to 12 ounces, I have a huge amount of shrink,” meaning wasted product, Callicrate says. “It’s very expensive, and it requires seriously skilled labor. However, if I can sell a bone-in ribeye random weight, I can cut my production costs significantly … and that’s what they brought to us right off the bat.”