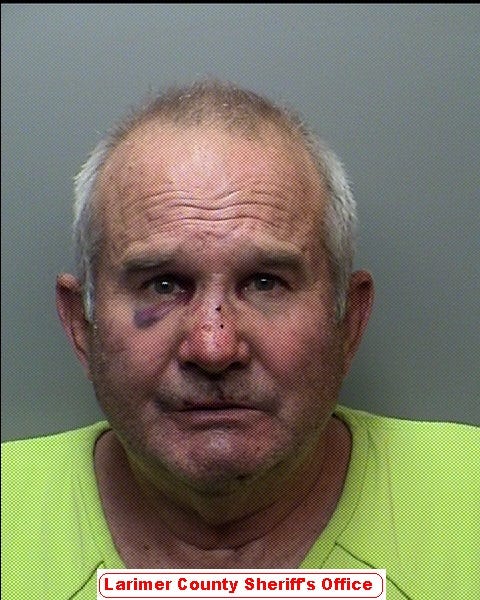 Here’s a step-by-step guide to the booking process at Larimer County Jail. Wochit

Investigators say a man driving on U.S. Highway 34 this weekend tried to sexually assault one of his passengers, then tried to hit both passengers with his car.

Robert Ewing, 57, of Longmont was arrested on suspicion of two counts of attempted first-degree murder, two counts of felony menacing and one count of unlawful sexual contact.

Larimer County Sheriff’s Office investigators say Ewing was driving west on U.S. Highway 34 on Saturday afternoon with a male and female passenger, with plans to go fishing. But when their planned destination was packed, the male passenger told investigators Ewing kept driving around the mountains.

Both passengers told police Ewing was driving erratically and making lewd comments about drugs and prostitutes. He had been drinking throughout the day, according to arrest documents.

The male passenger, uncomfortable with how Ewing was driving, asked him to pull over. When he did, investigators say Ewing attempted to sexually assault the female passenger, according to arrest documents.

The male passenger intervened, and he and Ewing got into a physical altercation. Both passengers were able to get out of the car, arrest documents say.

Ewing reportedly drove off, leaving the passengers behind. About one minute later, the male passenger said Ewing came back, accelerating straight toward him. The victims jumped out of the way, according to arrest documents. Ewing tried to run them over again by driving in reverse, and they jumped out of the way again, but the man was struck by Ewing’s passenger side mirror. Ewing then drove off again.

The man sustained minor injuries, and the woman was uninjured, according to arrest documents.

The Larimer County Sheriff’s Office would like to speak to anyone who may have information about this case. The incident occurred in the 1800 block of U.S. 34 near Waltonia Road between 3-3:30 p.m. Saturday at a dirt pull-off on the eastbound side of the road. The vehicle involved was a red 1997 Chevrolet Cavalier. Anyone with information about the incident is asked to call Investigator Kevin Hobson at 970-498-5162.

Ewing remains in custody at the Larimer County jail with a $65,000 bond. He is next scheduled to appear in court June 25.

Sady Swanson covers crime, courts, public safety and more throughout Northern Colorado. You can send your story ideas to her at sswanson@coloradoan.com or on Twitter at @sadyswan.Support our work and local journalism with a digital subscription at Coloradoan.com/subscribe.